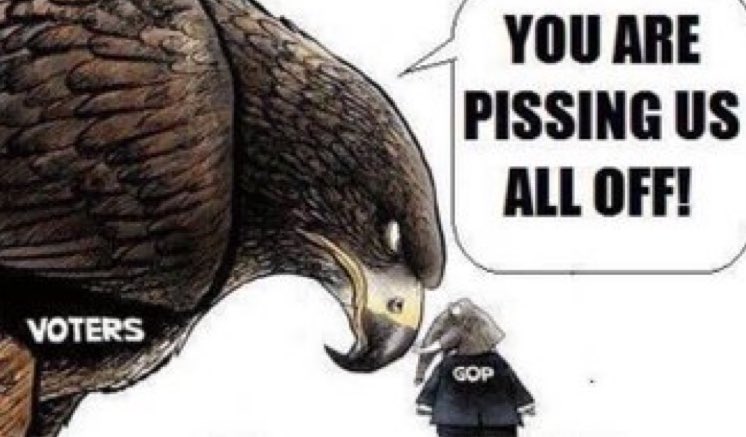 If you’re tired of having your intelligence insulted, you will truly enjoy what you are about to read and hear. I have been on a rampage for about three days now, because I religiously go to check the statistics on early voting and I see the Democrats over performing. I smile. Then I open up the latest New York Times polling information and I read about the tightening races and the seeming 180 degree direction that things have “suddenly” gone as we approach the last few days before the midterm.

Then yesterday, as you perhaps read, it was revealed that Donald Trump plans to announce his candidacy so that he can “surf the GOP’s expected post-midterm euphoria” in the wake of this mythic red wave we keep hearing about. And of course we read how Jim Jordan put the world on notice of the GOP-led House’s plans for the future. There was over 1,000 pages of that idiocy released into the world yesterday.

So if your stomach has been clenching, as mine is, and cognitive dissonance is setting in, and you chew on your fist so you don’t start screaming, your instincts are right. You’re being gaslighted. The truth is that the polls may be being “reported” properly, i.e., what they say are the numbers are being dutifully reflected by the press as the numbers given. But the polls aren’t right. They’re being doctored by a desperate GOP as you will read and hear below. And the journos are going to have to do better. Stenography is writing down what somebody says, journalism is “looking out the fucking window” to see if it’s raining.

As @tbonier and I just discussed, the red wave has not shown up in the 5 House specials, in Kansas, in post Dobbs voter reg, GOP candidate fundraising, the early vote or in legit Senate polling.

Where it is has shown up is in BS GOP polls, some natl tracks, rw twitter. 6/

The early vote data has changed over the past few years. A lot more people are voting early than used to. More people are voting by mail. Many people prefer that method now. I do. I always used to vote in person because I liked the excitement of Election Day. I felt part of things by driving down to the polls. Now, I don’t want to stand in line. I want to get my ballot in and sit back and watch the big picture. I don’t think I’m the only person doing this.

This is a long tape, 27 minutes. But listen to it because it will do your heart good.

“We’ve never seen an election where Democrats have embraced the early vote in a midterm.” Yes, indeed. The DNC put out a lot of field offices and it was a damn good investment. Definitely, send money to the DNC. You’re going to get their emails anyhow, telling you that the sky is falling and their hair is on fire, so send them some cash. I do. But know that you’re sending them cash for the good work that they are actually doing, NOT because we’re underwater and drowning. We are not.

Now let me say this about polling. In no way am I saying disregard them all. No. I am saying that Five Thirty Eight, Real Clear Politics and the Cook Political Report are poll aggregators. They average the results of multiple polls. The GOP is deliberately manipulating these polls by flooding the zone, to quote Michael Moore, with conservative-leaning polls in order to game the three polling aggregators just named.

As Simon Rosenberg just said, they’re doing it because they’re scared. They know what’s going on. They’ve got their internal polling, just as the Dems do. And that is what has caused them to game these aggregators.

Look to the other polls, the independent polls, for more realistic numbers. Here’s the latest from Marist.

These polls continue the pattern of respected independent polls being 4-8 pts more Dem than the recent flood of bullshit GOP polls. 2/https://t.co/7n6ykbIzVC

The Fetterman poll here matches the internal polling of the Democrats. Plus, here’s a bonus: Trump is in Pennsylvania this evening doing a rally for Mehmet Oz and Doug Mastriano. I personally think that’s the kiss of death, for Oz to be seen embracing Mastriano and Trump at a time when he’s desperately needing moderate suburban votes. He’s not following Glenn Youngkin’s playbook, clearly.  So, go to it, say I. Be sure to plaster pictures of the Trump rally all over the local papers and put plenty of tape on the airwaves. Let Oz hang himself publicly, it should be a good spectacle.

Likewise, the Kelly numbers look real and with respect to Walker/Warnock, again, it’s the goddamnedest race I’ve ever seen in my life. I will sit here like everybody else and watch with bated breath. For many reasons, control of the Senate being only one, I will utterly despair if that CTE-impaired liar defeats a good Democratic senator. That will herald a new low in the history of politics and I pray we don’t have to watch it.