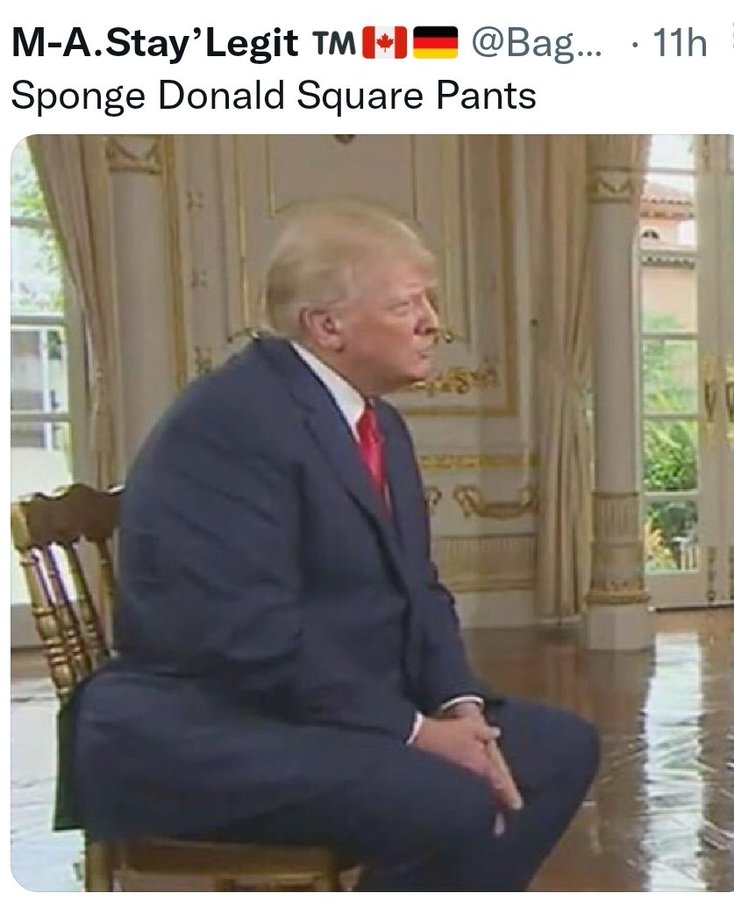 Everything was weird about Wednesday in the life of Donald Trump. He not only got hit with the latest lawsuits from the New York attorney general’s office in the morning, he suffered the further indignity of Judge Cannon’s ruling about the 100 documents being found to have been error, in the afternoon. Ergo, that night Trump went on Sean Hannity’s show (first time since February, surprise, surprise) to do damage control and that turned into sheer fiasco.

The comment that drew the most attention was Trump’s claim to have the ability to declassify documents telepathically. That immediately turned into meme fodder.

This is the best one.

Oh, to have the mental powers of Donald Trump. How we mere mortals long.

My boss called me and asked why I didn't show up to work all week. I told them that I thought about going to work and thought that was good enough. Long story short, I got fired. Thanks for nothing Diaper Don….#TrumpIsALaughingStock
Maybe Trump
Mar-a-lardo #DiaperDon pic.twitter.com/sOwl4A9hKI

What a gaffe. Of all of Trump’s gaffes over the years, and they are legion, this idea that you can declassify a document just by thinking about it has to be the worst.

If you missed that jewel, here it is again. Must be seen to be believed.

"There doesn't have to be a process … I declassified everything" — Trump on how he declassified documents (this is false — there is a process Trump didn't follow) pic.twitter.com/ehX8QqTnmB

What came out of Trump’s mouth was indeed straight out of Bizarro World but that’s not what’s getting all the attention. His supposed wearing of a diaper is. And you have to admit, the evidence is fairly compelling. Something is up with that weird box shape. Unless Trump is a version of Spongebob Squarepants in real life.

I saw this earlier and assumed it was a mean photoshop. But I just screenshotted this myself. pic.twitter.com/hyBNHQDvQ6

And then the photos got truly awful.

Diaper Don using the 43 top secret documents as depends. Oops was I not suppose to share this. https://t.co/zml1XrzgGt

God knows screenshots of Trump’s crotch are not what I thought I would be spending my sunset years blogging about, but life takes twists and turns, right? And the truth is always stranger than fiction.

You tell me. What’s in front of our eyes is what’s there and you can’t un-see it, unfortunately. Did he have a large pillow in his pants because the chair wasn’t comfortable enough? There aren’t too many options here.

And here’s where all this may be leading. What a thought. But it is plausible.