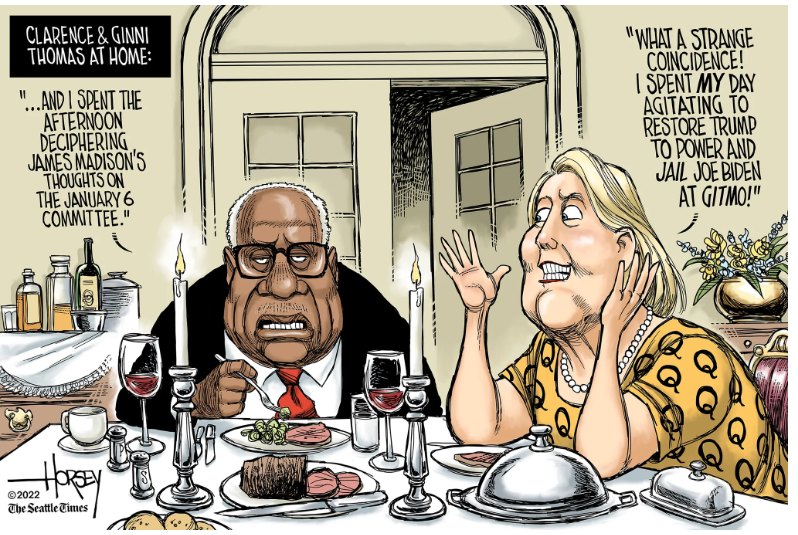 Washington, D.C. has always had its characters and that will never change. What will also never change is the fact that at times of upheaval in Washington — Watergate was one instance and the 4-year-long scandal that was the Trump administration is another — the truth comes out about those characters and you find out who’s who hiding in the shadows.

Ginni Thomas’ explosive texts to Mark Meadows turned the spotlight on Mrs. Thomas and she’ll never live down what is coming out about her now. Jonathan Last at the Bulwark has penned a scathing piece about Thomas, beginning with an analysis of her emails,

Everything about these emails—from the bizarre capitalization and punctuation,3 to the references to “Facebook friends,” to the obsession with talk radio and her genuflection before grifters like O’Keefe, Clarke, and diGenova shows that what we’re dealing with isn’t an intellectual, or even a smooth operator, but a Boomer with an internet connection, an important spouse, and too much time on her hands.

When you’re done reading this, it will make complete sense to you that she loves Donald Trump.

There’s nothing wrong with dilettantes. Some of the most interesting people I know are dilettantes. But generally speaking, the adults in government understand that dilettantes are supposed to be marginalized: You give them just enough access to the grownup table so that they think they’re prized for their inner worth—and so that their senior partners don’t feel disrespected—but not an inch more.

That’s the entire career of Ginni Thomas. Literally everyone in conservative Washington knows this about her. I’m sure her Washington friends will publicly testify to her being smart and effective.4 But in private, it’s a different story. I wish I had a nickel for every time I’ve heard people in the various precincts of Conservatism Inc. laugh about the self-important preening, unserious dabbling, and incompetent hackery of Ginni Thomas over the years—in the wistful way a butler might indulge a wealthy child.

None of this means that everyone kissed up to Ginni with the explicit hope of getting access to her husband (although it’s hard to imagine that sort of thing never happened in Justice Thomas’s three decades on the bench). But hiring her for “consulting” or participating in a project with her was a way to signal that you were on the right team.

And of course, that’s one of the things that people in Conservatism Inc. never talk about in the open.

There’s been a lot of that over the last 25 years. I used to think this wasn’t a conservative problem so much as a Washington problem. That surely the left was filled with creeps and dilettantes and hangers-on, too. That liberals and Democrats had their own list of unmentionables.

Wasn’t that the entire lesson of the Clinton years? Here was this guy who treated women like crap—and maybe worse—but everyone on the left had to smile and look the other way because he held power and power must be tended, respected, and protected.

This isn’t to say “both sides.” I don’t have a scale. Maybe both sides have always been just as bad as the other. Maybe one was worse then and the other is worse now. I don’t know.

But I do know that one of the freedoms of being politically homeless is not having to pretend that Ginni Thomas is an activist, or an intellectual, or a personage of any rank. You can acknowledge that she’s just a 50th-percentile internet commenter who was given a fast-pass into #ThisTown because of her husband.

And while no one is going to push Clarence Thomas off the Court—sorry, he ain’t never going to be impeached—maybe the upshot of the current scandal is that the rest of America will finally understand what Ginni Thomas is.

She’s the modern version of Martha Mitchell. Washington is a lot like Hollywood insofar as its a one-industry town and 1) everybody wants to be in the game, whether politics or show biz; 2) for the same reasons, power, prestige and money; 3) nepotism and cronyism rule the day; 4) spouses — or relatives, friends even — who on their own couldn’t generate enough heat to move the thermometer even one degree, will be accorded the privilege of being taken seriously if they have a heavyweight in their corner.

That, explains Last, is the “only reason she was texting the president’s chief of staff [on January 6] instead of being the angry cat lady on Facebook is because she married a man who got himself appointed to the Supreme Court.”

The Thomases were never a duo of intellectual equals, or a power couple where each member had their own thing going on, and where the merger of the two was like Voltron coming together.

This isn’t James Carville and Mary Matalin. Or Norman Podhoretz and Midge Decter. Or Irving Kristol and Gertrude Himmelfarb. Or any number of other famous couples. Heck, this isn’t even Sonny and Cher.

No. The Thomases are more like Ivanka and Jared: The senior partner in the arrangement held a position of such high importance that their society scrabbled around to find something for the dimmer partner to do in order to make them feel important, too. In Jared’s case, that has been destroying newspapers, losing money on real estate, and being tasked with brokering peace in the Middle East.

For Ginni Thomas it has meant creating makework for her at various conservative “activist” groups and letting her participate in listservs with people who have real jobs.1

In all fairness, Ginni Thomas has a law degree from Creighton University and she had a few jobs in D.C., which are described as “low-level D.C. staffer.” But these are not credentials which in and of themselves would allow Thomas the access to roam the corridors of power as she has so freely. She’s the spouse of someone important and she needs to be kept happy and so she is indulged. Unfortunately, she crossed lines that shouldn’t have been crossed and now she’s accountable and it’s a real mess.