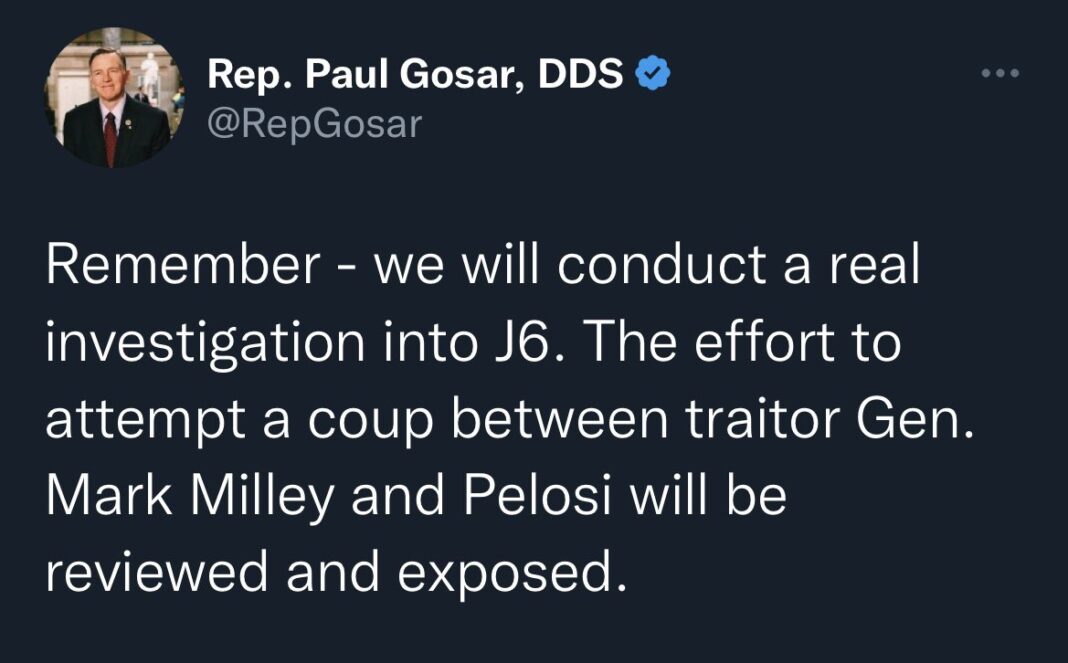 The demented dentist of Flagstaff Arizona is promising a Congressional Investigation into the real masterminds of the Jan. 6th, 2020 insurrection – Joint Chiefs Chairman General Mark Milley, whose tenure in that office chiefly consisted of preventing Donald Trump from pulling the military into his treasonous schemes, and Democratic Speaker of the House Nancy Pelosi, who apparently was so horrified at the prospect of the leader of her own party, Joe Biden, becoming President, after four years off the Donald Trump shit-show, that she was willing to rend the Republic asunder to prevent that dread prospect from happening.

Folks, you can’t make this shit up:

From day one, JoJo.

Republican's attempt to short-circuit the extensive investigation of the Jan 6 insurrection IN ORDER TO ELIMINATE ALL EVIDENCE OF GOP INVOLVEMENT was, of course, NOT promoted before mid-terms, or ANY OTHER TIME.

You'd think they never said a word about inflation, the cost of Thanksgiving dinner, or the price of gas. I'm over the people who are gullible enough to believe their unbridled horse shit.

So much for inflation amirite?!

Imagine, if like Brazil we started locking people up the day of the coup attempt. We’d be in better shape today😞

Wow. Just when you think they have reached the bottom of the barrel, they take out a longer spoon.

So the republicans have plans to waste a lot of money in an effort to protect themselves from prosecution.

Homeboy inhaled too much plaque dust in his career.

Acquired from someone else, but find it hilarious. I can hear the music… pic.twitter.com/iVCXBGdx0M

In this sort of discourse cesspool, words lose their meaning.

I must have missed this when I was watching TV on January 6, 2011 when I was switching between five different networks.

Probably in the Fox News and OAN coverage.

Gosar represents the small but all too real class of victims of alien space probing that suffer the debilitating effects of having an ear mistaken for their anus, resulting in half their brain sucked out.