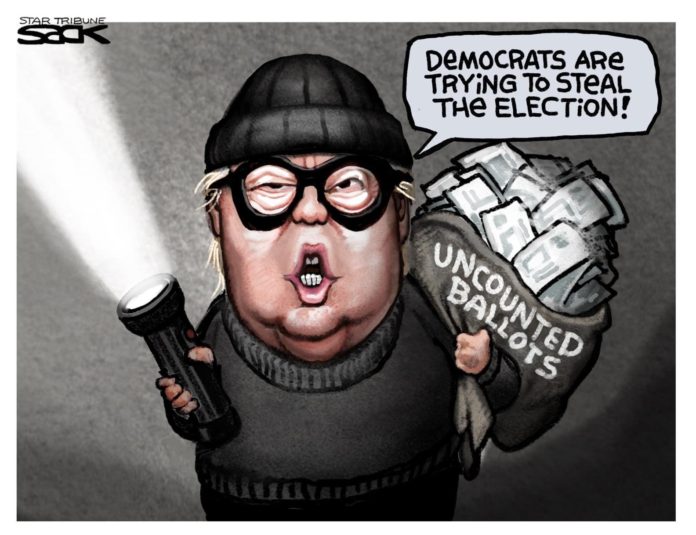 I’ve been seeing headlines the past couple of days about a flap with some ass-hats (MAGA types) in a conservative rural county in New Mexico refusing to certify the votes in their recent primary.   We’re talking seven or eight thousand votes by the way.   I noticed a headline saying the NM State Supreme Court issued an order for them to certify their results.   Today I finally clicked on a story and despite howls of protests from people in attendance the Board voted 2-1 to certify the results.   Keep in mind they admitted they had NO evidence there was any fraud.  Or even problems or irregularities!   They just petulantly went along with some dude who decided that “reasons”, Dominion voting machines and whatever meant the results couldn’t be trusted.   No matter that none of his/their preferred candidates lost, or they hadn’t heard about voter fraud elsewhere in the state.  They just didn’t want to certify.  Just because.   What made this a BFD seems to be that for all the primary results for local, state and federal races in the State to be Officially Certified by the Secretary of State ALL counties have to have certified their results.   So these MAGA-asshats decided to try and block every single race in the state from being certified!

What prompted me writing was yet again seeing this infuriating phrase in the article:

Think about the countless times you’ve heard or read that phrase.   I’m serious.  Think about it.   It doesn’t seem to register as a mosquito sized blip on the radar and worse, you hear and read it from journalists and politicians across the political spectrum.   Even from supposedly uber-liberal prime-time MSNBC hosts!   The phrase has been so often used, used again (and again & again) it’s permeated everything.   Like Trumpian burnt steak farts (more likely sharts) permeating the drapes, furniture and carpet of the Oval Office during his four years there.   It’s like that ground up dirt on tank trails I recall from Camp Pendleton, a consistency finer than flour that in a platoon sized hump (march) fills the air and seems to soak into not just your lungs but your pores.

I maintain we’ve been conditioned, and intentionally so (starting with Bill Barr and other Trump appointees starting after the 2020 results were in) using that word and phrase to believe voter fraud is serious (and ongoing) problem in this country, just not in the case of Trump’s failed re-election.   Conservatives have long proven better at messaging than liberals and matter-of-factly using a term like No widespread voter fraud implies there’s a helluva lot more out there than the average person realizes.   Which is a LIE.   The seed they planted was that there was enough out that that had the Presidential part of the election been close, then we’d have had a real mess on our hands.   Look, Barr and others got what they wanted out of Trump.   Another tax cut for the rich.  Gutting of regulations.   And most of all a huge reshaping of the federal judiciary.   They wanted to be done with him but still felt a need to suck up to him if only to keep him mollified enough to continue to energize MAGA types to keep voting and vote Republican.   However, on a more insidious note they truly weaponized their voter fraud myth to their advantage.

“No widespread voter fraud.”   My problem with this way too freaking common phrase is it suggests there was actually a fair amount of voter fraud in 2020.   Now, journalists (except on Faux Nooz and more militant RWNJ outlets) and politicians (with of course the usual flaming bag of excrement throwing Republicans) usually “qualify” their “No widespread voter fraud” statements with a mealy-mouthed “not enough to affect the outcome” of this or that election.   But it’s my belief the damage is already done by the time they do that part, if they do so at all.   That part gets about as much notice as when some outlet trumpets a story without proper fact checking and has to retract it – publishing that retraction in a short paragraph buried deep, way the hell away from the front page.  Or a TV host at the end of s show and just prior to closing commercials issuing a “By the way, our story on such-and-such contained this error and we apologize.”  People simply don’t pay the same level of attention.

Nuance, along with context died a long time ago so as I’ve said even if some type of “not enough to affect the outcome” gets tossed in after the damaging “No widespread voter fraud it simply doesn’t matter.

I believe the reason the Big Lie has not only persisted but metastasized and grown can be traced back to EVERYONE in journalism and politics using the term “No widespread voter fraud.”   However voter fraud has never been this huge problem that requires a big, coordinated effort to combat.   It’s simply not the big, “widespread” problem conservatives make it out to be.   Conservatives have been making waves about it for years (after decades ago developing a system of going to nursing/old folks homes and signing up elderly voters for absente ballots.   Hmmmm.  Is it only me that jumps to thinking “projection?)  In any case conservatives have launched many a project to expose all this voter fraud they’ve screamed about.   And always found a handful of cases, more often than not Republicans by the way who’ve committed this particular crime.   Even KKKris KKKobach’s big, fancy commission fell flat on its face despite all the hoopla and resources it got.

Now, does voter fraud happen?   Sure.   Here and there people cast ballots they aren’t legally entitled to cast.  (Looking at YOU Mark Meadows – with your crappy little trailer in the middle of nowhere which you’ve never set foot in yet used as your address on your voter registration!  Not that YOU will be charged with a felony even though you’d DEMAND any Democrat doing such a thing get the book thrown at them!)  However, it’s rare and I already pointed out for the most part committed by Republicans!   Oops.

So, what I want is for there to be a movement rise up to STOP the use of the term “No widespread voter fraud.”   I long ago gave up hope, but for too long kept hoping journalists and (sane) politicians would use a less loaded word.   “Significant’ perhaps.   Or be accurate and truthful by saying something along the lines of “Voter fraud was as always minimal.”  Or perhaps use the word “negligible.”   And then go on to say what little that’s been identified had no impact on the outcome.

Much as it pains me to say so, WE share a significant chunk of the blame because we haven’t made a fuss about this and demanded that journalists and politicians drop the use of the term No widespread voter fraud.   Even though that Pandora’s box has been open we need to do our best to mitigate the damage that’s been wrought by that single, pervasive in our discourse phrase.