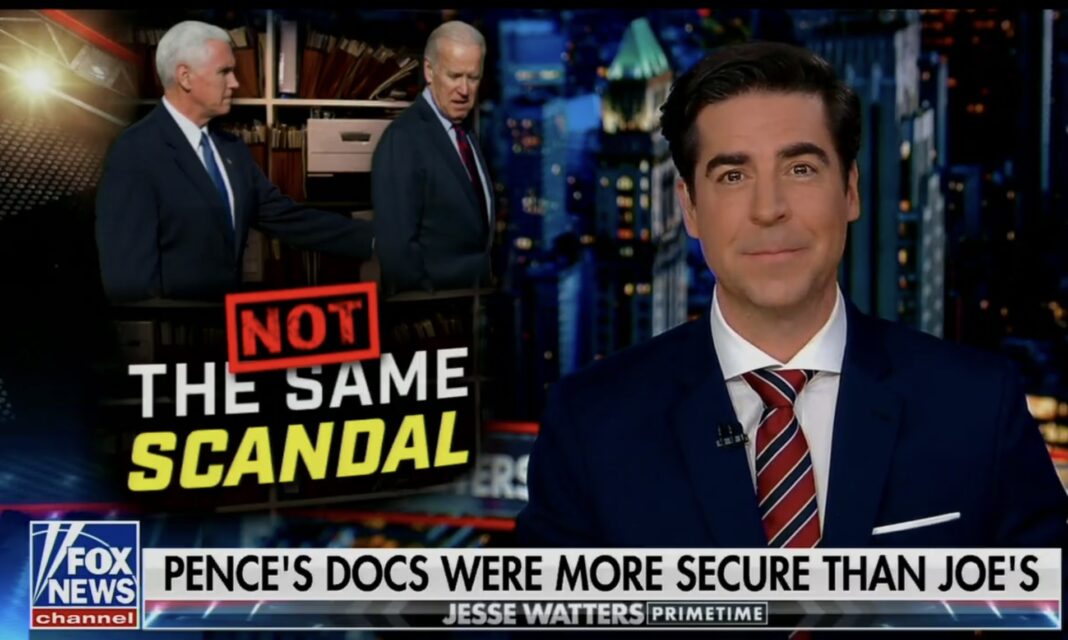 As you probably heard one of former Vice President Mike Pence’s lawyers found a “small number” of classified documents in Pence’s Indiana home the other day, which he turned in to the FBI…

Pence, who served as vice president for Donald Trump, is the latest politician encountering a classified documents scandal, joining Trump and President Joe Biden. Last week, the documents found in Pence’s possession were turned over to the FBI, although there are conflicting reports on the process.

A CNN exclusive report said that Pence’s lawyer discovered “about a dozen” classified documents at Pence’s home and turned the documents over to the FBI.

You just know the crew at Faux News were as outraged at this potential breach of National Security as they were when papers were found in Biden’s Delaware home.

Except they were not.

Here is Jesse Watters yucking it up that Pence had less time to pack his office than Biden because Trump was busy trying to subvert the Constitution:

Watters: Biden says he was in a rush to pack up his stuff after his Vice Presidency. I think Mike Pence was in a little bit more of a rush. Remember that transition? Biden knew he was leaving. Pence was looking around saying is Trump going to pull this off pic.twitter.com/3HtNbJocfJ

Jesse Watters casually suggests that Pence commit crimes: "Pence, seriously, we have this great thing going with Joe. C'mon man! And then he confessed to it. He couldn't just destroyed it, we never would've known." pic.twitter.com/RtFKwvo5YH

And then he'll say he was just joking, it was irony. His favorite ploy, and he's the most unfunny man I've ever seen on TV.#FratBoyJesse

Fox and friends admitting they don't really care about classified docs. Unless a democrat did it.

literally making fun of themselves about the fact they have to pretend they have integrity.

I like to watch people who make me smarter. Viewers of the 5 must do so to become less informed.

What a bunch of disgusting characters.

Their destruction of this country is just a joke to them.