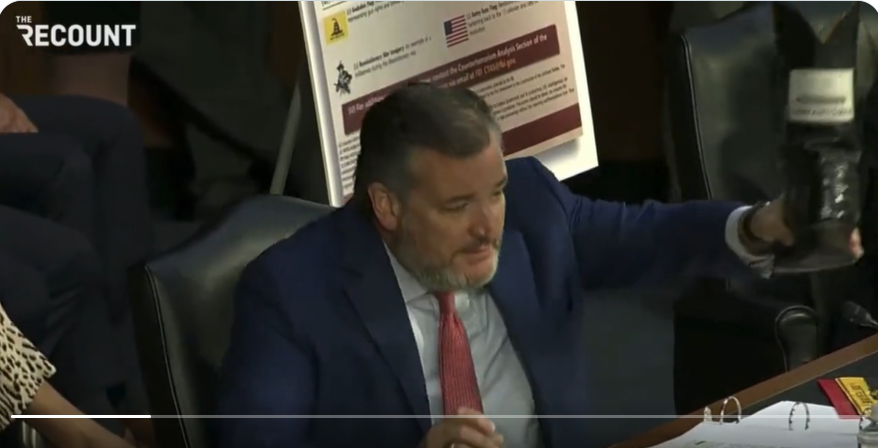 “These boots are made for walking and that’s just what they’ll do.” — Nancy Sinatra

One of these days Ted Cruz is going to walk all over you. He proved that in a Senate hearing this morning with FBI Director Christopher Wray.

Teddums is very emphatic that the FBI is disparaging symbols, and linking such symbols to terrorist organizations, when the fact is, Ted wears one of those symbols on his boots and strolls the halls of congress that way. Ted, you’re proving our point. If you’re not a domestic terrorist and a threat to democracy, who is?

CRUZ: Also included on this is a text that I was particularly struck is the Gonzales Battle Flag – Come and take it – as indicative of being a violent extremist militia. Well, I will self report right now that every day in the Senate, I wear my boots that have the Gonzales battle flag on the back of them. Director Ray, what are y’all doing? This makes no sense. Do you agree with this FBI guidance? That the Betsy Ross flag, and the Gadsden flag and the Gonzales Battle Flag or signs of militia violent extremism.

FBI DIRECTOR CHRISTOPHER WRAY: Well, Senator, I’m not familiar with the particular document you have behind you and I’m not in the practice of trying to comment on documents that I haven’t recognized. But I will tell you that when we put out intelligence products, including ones that reference symbols, which we do across a wide variety of contexts, we usually make great pains take great pains to put caveats and warnings in the document that make clear that a symbol alone is not considered evidence of violent extremism.

Yes folks, Nicky Khrushchev did the same thing back in the day. He slammed his loafer on the United Nations lectern and screamed, “We will bury you!” and that was after his statement in 1956 that Russia “would take over America without firing a shot.”

How wonderful for Texas that they have a senator who evokes memories of one of the most dangerous madmen in Russian history and who almost blew up the planet over the Cuban Missile Crisis.

Director Wray, for his part, did a Fauci, meaning that he went out of his way not to laugh out loud and actually dignified Cruz’ idiocy with a response.

“Performative jackassery” is what Nebraska Republican Ben Sasse called this kind of thing  — when, comically, he happened to be sitting right next to Ted Cruz. And that was the same day Alan Dershowitz called Cruz a bigot.

Good for you, Teddums. You got your sound bite on Fox News for the day. You did your job Not the one you get paid to do, to be sure, but the one that you hold in your heart as valid, trolling the electorate and pandering to the lowest elements in our society, hoping in vain to become the next Donald Trump. What a life goal.