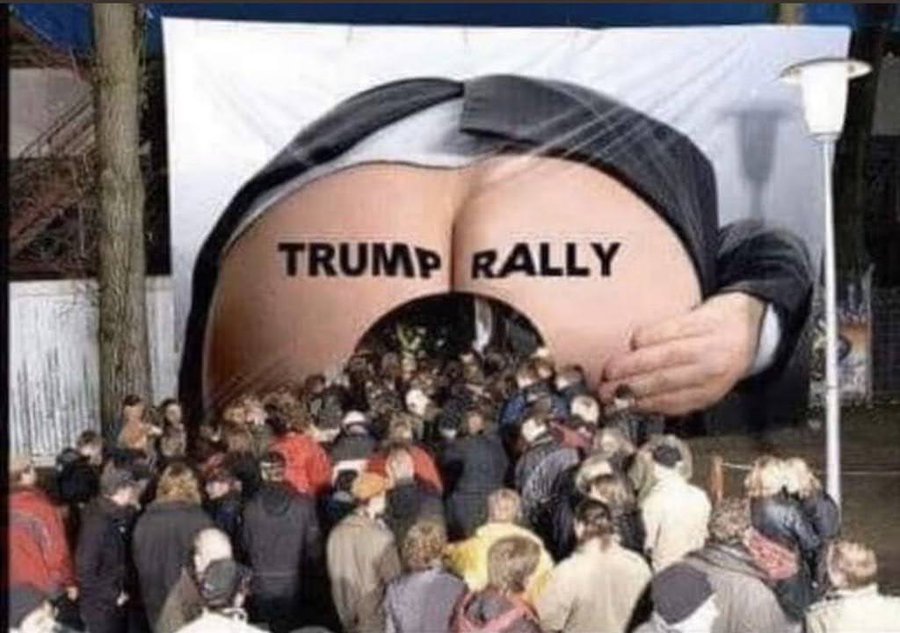 You can’t blame Steve Bannon for trying to get the band back together. He makes his living by claiming that Donald Trump is going to be back in office just any time now, along with putting Mike Lindell on the other side of the split screen saying the same thing. Unfortunately, Lindell is going through a rough patch right now, and the only people listening to him are lefties who need a good laugh.

Nevertheless, Bannon persists. He claims that Trump’s rally “is the kickoff” to the midterm election and that next week is going to be a biggy in the Arizona state legislature. It’s the same tired, old, so hoary it might as well be covered in frost, fable that Arizona is the first domino to fall and then the other swing states will follow.

Have a listen. Have the aspirin bottle handy.

Bannon this morning says the purpose of the Trump rally in AZ today is to pressure the AZ legis to decertify the 2020 Biden electors, then PA, WI, and GA will follow suit and make Biden an illegitimate president in the minds of swing voters heading into the 2022 elections. pic.twitter.com/DOj4N8QyS9

Now the only part of this dramatic scheme that doesn’t work, and it is a crucial one, is that in the first week in January a judge ordered sanctions of $50,000 a day against Cyber Ninjas for not turning over documentation which the Arizona Republic newspaper had requested through a freedom of information request. Cyber Ninjas proclaimed that it was insolvent and that it had laid off all of its employees and it was out of the decertification game for good. That led to recriminations as you might well expect. Daily Beast:

The move comes as a blow to audit dead-enders who have long insisted that Cyber Ninjas secretly has proof of Donald Trump’s 2020 victory—but who are now smearing the group as “grifters.”

Since the audit’s launch this spring, Cyber Ninjas claimed to run the operation with radical transparency, sharing live streams of auditors as they flipped through stacks of ballots. The livestreams attracted an online community on messaging platforms like Telegram. Some of those Telegram channels were less than pleased with Cyber Ninjas’ dissolution on Thursday.

“FAKES,” complained one member of an Arizona audit channel. “SOAB [son of a bitch], all they care about is $.”

Cyber Ninjas did rake in the cash over the course of the months-long audit. In July, the company disclosed more than $5.7 million in donations from fans. Meanwhile, the group’s audit was a mess, going millions over budget and months over deadline, during which time audit managers appeared in conspiracy documentaries about the election and were accused of ignoring sexual harassment.

But the group also made a costly error when they refused to turn over court-ordered records, which the newspaper the Arizona Republic sought via a public information request. During a contempt of court hearing on Thursday, the Republic requested a $1,000-per-day sanction until Cyber Ninjas handed over the documents. Maricopa Superior Court Judge John Hannah called $1,000 “grossly insufficient” and upped the sanction to $50,000 a day.

“It is lucidly clear on this record that Cyber Ninjas has disregarded that order,” Hannah said on Thursday.

Hannah also cast doubt on the notion that a newly defunct Cyber Ninjas would be unable to produce the documents. “The court is not going to accept the assertion that Cyber Ninjas is an empty shell and that no one is responsible for seeing that it complies,” Hannah said.

Wilenchick told the AP that the group would not produce the documents because it could no longer afford to retrieve them. Hannah, however, warned that the $50,000 sanctions would begin on Friday, and were applicable to individuals, not just the now-defunct company.

This is a death blow to the decertification fantasy, by any rational analysis. But Bannon is not fazed. No, sir, he is touting how wonderful the Trump Arizona rally is going to be, and how much it will accomplish.

And Trump is making no bones about what he’s going to talk about. Look at topics one and two. 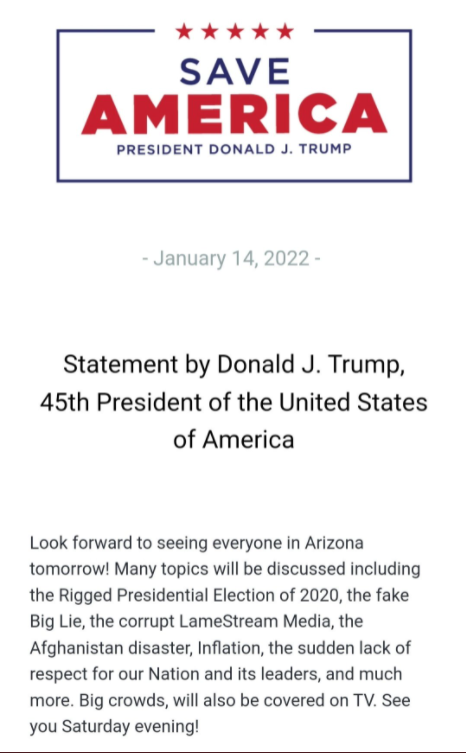 It’s going to be the zoo that you expect, bread and circus. Trump brings the circus and he’ll take the MAGAs bread.

Trump’s selection of Arizona to lead off his 2022 rally appearances shows how he intends to make his “stolen” election claims a centerpiece of his midterm message — and perhaps the basis for a White House comeback bid in 2024.

The state’s new House map, following redistricting, is widely seen as favoring Republicans. Inside Elections with Nathan L. Gonzales rates the races for the redrawn seats of Democrats Tom O’Halleran and Ann Kirkpatrick as Lean Republican and Tilt Republican, respectively. That has many state political operatives and pundits watching GOP statewide and House primaries on Aug. 2.

“The action here is going to be in the primaries, really, the Republican primaries,” said Michael O’Neil, a former political science professor-turned-private pollster based in Arizona. “The list of speakers at the rally, and really most Republican candidates, for the sake of winning their primaries, are tickled to have Trump here. They’re doing everything they can to associate themselves with him.” […]

Democrats are hoping Republican candidates do two things in primary races: Wrap themselves in the “Make America Great Again” flag, and leave the eventual winners beaten to a political pulp — and castable as mini-Donalds in the general election.

“Chaos might work for Trump, but we think it’ll prove detrimental to GOP candidates,” the DSCC official said. “He’s pushing these candidates to take unpopular stances. … Whoever makes it out of attacking each other in the primaries will have gone through months and months of attacks.”

O’Neil disagreed, saying “the Trump endorsement is golden — candidates are doing everything they can to associate themselves with him.” He also sees one possible motive in Trump picking Arizona for his first 2022 rally.

“There is probably no better state for Trump in terms of being able to draw a big crowd. Florence is a rural area, it’s the heart of Trump country,” he said. “He has always pulled big crowds here. Given his ego, that’s probably the No. 2 consideration. If he drew a small crowd out of the gate in a midterm year, he knows everyone would say, ‘He’s lost his aura.’”

“This way, he can send a message that he’s still the kingmaker,” O’Neil said.

That’s the message he intends to send. Get ready for an evening in Arizona the Altered State. You don’t even have to take drugs to get there, just turn on the computer or the TV, it will find you.

Here is a link to a seven-minute long interview with Bill Gates of he Maricopa County Board of Supervisors. He also makes it “lucidly clear” that the audit is over and it found nothing.

On these facts, I can’t wait to see what happens in the Arizona state legislature next week. This is going to be like going into the county morgue and demanding that the coroner resurrect the corpses and make them sing and dance. Stay tuned.