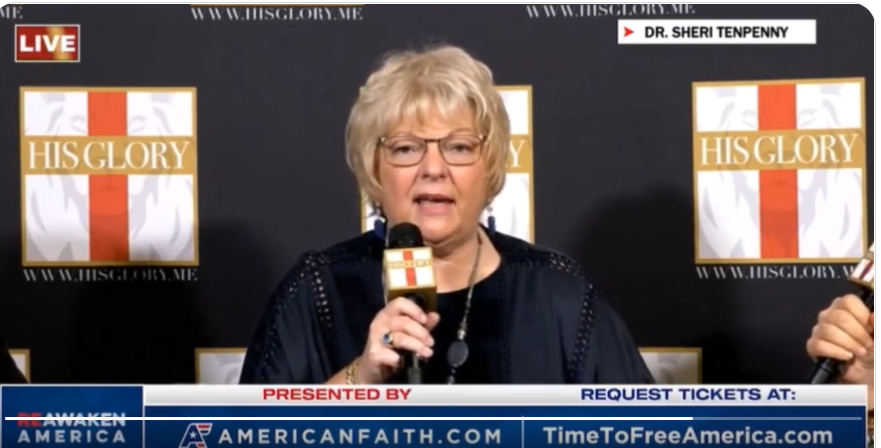 This belongs in Schrodinger’s cat box. This has to be heard to be believed. I know that baffling them with bullshit is how the intelligentsia of the right likes to approach things, but I have to think that the likes of Steve Bannon and a few others that actually have some level of education and intellect are going to find this a bit too much.

Here is Sherri Tenpenny explaining COVID’s place in the cosmos. I hope you’re sitting down.

Sherri Tenpenny, one of the right's leading anti-vaccine "experts," claims that COVID vaccines are creating "quantum entanglement" between those who take them and "the Google credit scores and the dematrix and all of those things." pic.twitter.com/1Hft5GXZMu

This is the same wingnut who claimed that the COVID vaccine could magnetize you. She’s a medical doctor, incredibly, who found herself in a mountain of debt and figured out that the only way out of it was to bastardize her medical degree and become an anti-vaxxer. Since then she’s made a nice dollar and so you can expect for this to continue. Insider:

In March, the Center for Countering Digital Hate (CCDH) named Tenpenny among 12 anti-vaxxers responsible for spreading 65% of all false information about vaccines, dubbing them the “Disinformation Dozen.”

The report has been influential, and was name-checked by President Joe Biden in July, who said: “These 12 people are out there giving misinformation. Anyone listening to it is getting hurt by it.” The remark came after his explosive comment that anti-vax claims on Facebook were “killing people.”

But even censure from the most powerful person in the world can only do so much. Anti-vaccine disinformation has crept up on the Biden administration’s COVID-19 response, complicating the rapid rollout of free, life-saving vaccines.

Tenpenny’s limited following of around 115,000 people across conventional social-media platforms (she was recently banned from Twitter) obscures her true reach.

Between her podcast, appearances on Infowars, and speeches at right-wing rallies, she’s had more than 1.5 million streams.

Centers for Disease Control and Prevention officials are now saying that vaccine misinformation is contributing to the “pandemic of the unvaccinated.” In the Ohio Statehouse, Tenpenny knew that Democrats, who opposed the bill against vaccine mandates, would confront her with the “Disinformation Dozen” label.

Tenpenny thinks everybody is an idiot and that’s how she’s playing it. She’s got the idiots who listen to her and send her money and then there’s those of us who confront her and she thinks we’re idiots too, and uses that as a badge of honor. Nice racket.

Tenpenny sells a suite of four educational courses on COVID-19, priced at $79 a module, though currently discounted to $24.95.

Morawska had written an influential paper about the methodology of assessing airborne infection, calling for a more nuanced understanding, as Insider’s Hilary Brueck reported. She had referred to the “dogma” of older science, saying it needed refreshing.

Tenpenny presented the quote with little further context, framing it as part of an argument that social distancing is useless in preventing infection.

“Dr. Tenpenny completely misrepresents what I say,” Morawska told Insider. “I never said that distancing is useless, quite to the contrary.”

Tenpenny is making it all up out of whole cloth, but I confess, this new spin into physics is a doozy.

Quantum entanglement is an offshoot of quantum mechanics that says two particles can instantly communicate with one another, even across cosmic distances. What that has to do with your credit scores, or with the global pandemic, don’t ask me. Tenpenny is a fraudster, plain and simple, with no respect for anybody’s intelligence and so she’s standing up there making it all up on the fly — and taking it to the bank.

That’s this “doctor’s” only value, is can she convert fraud into the coin of the realm. As long as that is the case, she’s going to be spewing out drivel.

“First do no harm” may be part of the Hippocratic oath she took, but she’s killing people and she’s just fine with it. It got her out of debt and now she’s a fat cat.

I wonder if there’s going to be a separate circle in Hell for right-wing fraudsters who’ve caused deaths from lying about COVID-19? Because if there was any justice in the cosmos, there would be, quantum entanglement or not.