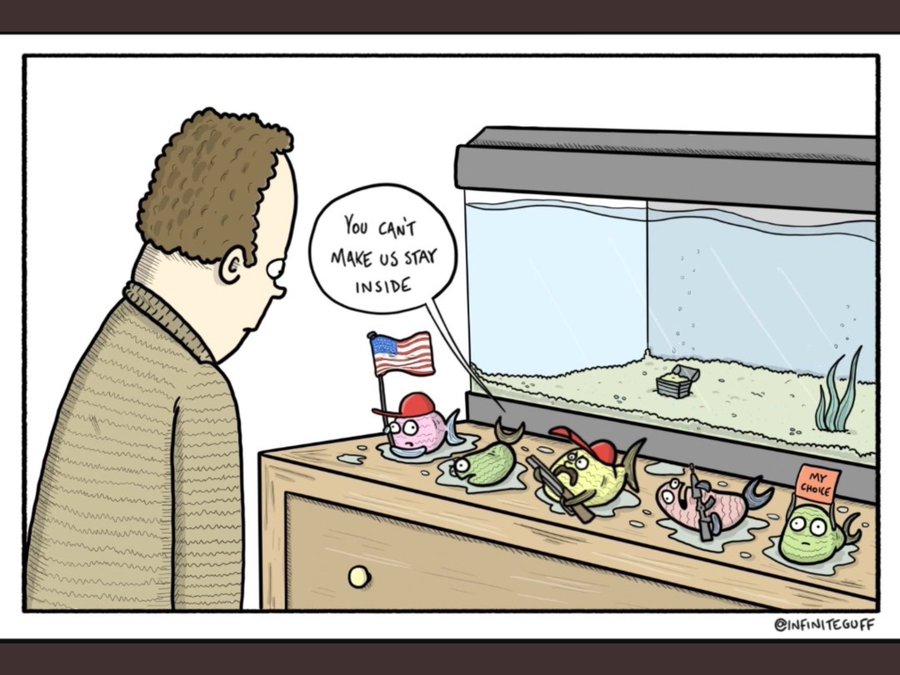 Two people I know have husbands in the ICU. One is being taken off the vent today, and the other will be if there’s no improvement in the next few days. Neither were vaccinated.

I didn’t realize I could feel sadness and apathy for someone at the same time.

I am particularly moved by this phenomenon of self-destruction because of the fact that it hit home a few days ago. A friend called me to wish me a happy birthday. In the course of the conversation I asked her if she had gotten the booster shot yet. She muttered something I didn’t understand and so I asked her again. I said, “Did you have all three shots? Are you fully vaccinated now?”

She said, “I can’t lie to you. I haven’t had any shots.” I almost fell off the couch.

Long story short, this is an old friend of mine from a church we once both attended but which has now dissolved. I’ll call her “Sue.” Sue has become an anti-vaxxer. Her husband is a conspiracy theorist (and these are the words she uses to describe him) and he believes that the vaccine will kill you. He also believes that the earth is flat and the moon landing never happened, nor the holocaust, and you know the roster of idiotic ideas as well as I do.

Sue does not cosign on his wilder conspiracy theories but somehow she got drawn into this one. She told me what a monster Anthony Fauci was, “killing dogs.” I said, “I’m aware of a photoshopped video claiming that.  And I also wrote a piece on it which quoted a columnist at the Washington Post who fact checked and debunked all of the puppy torture rumors.” She also mentioned Dr. Fauci “making billions” and that is what that creep Roger Marshall was trying to push in the Senate a few days ago, that Fauci is becoming mega wealthy off of his evil doings with COVID. And of course you have all seen the placards where Fauci is made to look like Hitler and blamed for the death of millions. This is some sick stuff.

So I told Sue about this and I begged her to exercise common sense. She told me that her two daughters, in their twenties, got vaxxed and that “there is a fight in this household every single day about this subject.” I said, “Consider yourself blessed that your children have enough sense to take care of themselves even if your husband doesn’t and that they care about you and want to see you safe as well.”

In any event, when I saw the footage of this anti-vaxx demonstration in Washington, D.C., this all replayed in my mind again. Sue is a perfectly reasonable, hard working middle class person. She sells real estate. She has three kids and a house with a pool in Southern California. She attends church and does charitable deeds. I would color her normal, above average in fact, in every way except for this anti-vaxx madness and madness is what it is. I wonder if Joe Biden looked out the window today and said, “My God, I’m the care taker for an open air lunatic asylum,” because he would have been correct in reaching that conclusion.

I hope I don’t lose my friend. I truly do. But I know enough about life at this point to know that I can’t make anybody else’s decisions for them, even if doing so would save them from an awful death. All that I can ever do is share what I know. That’s all any of us can do.

True Reality-My brother was denied the care he needed for a non-COVID illness, he died.
They were just too short handed to care for him because of non-vaccinated COVID patients.

This is where it affects all of us. It has crossed my mind that I wouldn’t want to have to go to an ER right now. The medical system is swamped and I don’t see that improving, with this idiocy going on. So I have a heart attack, God forbid, or something unexpected, I guess I take my chances.

I didn’t add to my friend’s composure the other night, but I don’t know if I persuaded her, either. It was a sad conversation. But this is the new abnormal in this country, friend against friend, brother against brother, a complete free for all. I think in her case, the issue is that she will have to defy her husband, who is an idiot and I told her that, and side with her daughters if she gets vaxxed and she doesn’t want to have to make that “choice” even if it means saving her own life. That’s how crazy this has gotten. The dysfunctionalism in this particular family may end up killing one or more of them.

Here’s what I see. pic.twitter.com/cL3W9b4XbD

It’s ironic, that America, a country known for its advances in science, should end up being the land of anti-science superstition.

And as a bonus, look at this. I remember the Summer of Love, 1968 and whatever this is, it ain’t that.

Musical entertainment at the anti-vax rally in DC. From @FordFischer pic.twitter.com/Q1Jpsd16bJ