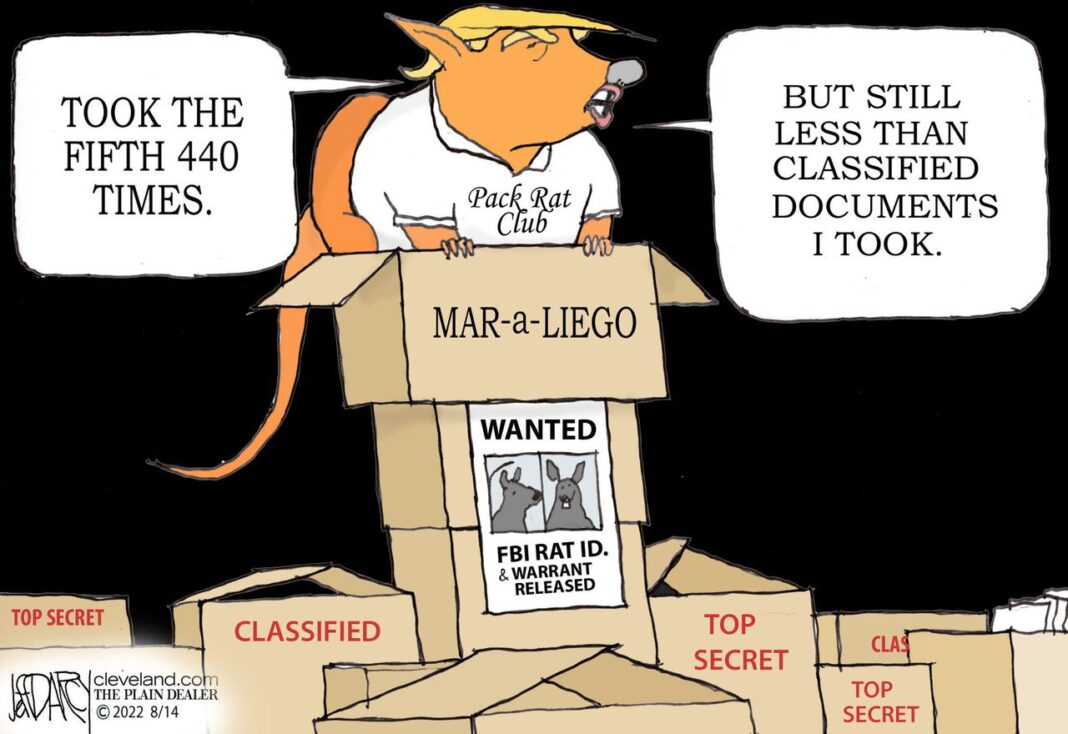 Ever since the existence of classified White House documents spirited away to drumpf’s dump of a Florida clubhouse has been public knowledge, der Gropinfuhrer has insisted that the trove of confidential, Top Secret, and Top Secret/Sensitive Compartmented Information documents squirreled away there “are mine”, even though all law and precedent since at least The Watergate era, and Richard Nixon’s attempts to conceal his crimes behind a curtain of privilege and confidentiality, was upended by Congress.

As I pointed out in my post yesterday, Politico has reported that even after drumpf had relented and sent some of “his” documents back to the National Archives last January, he and his lawyers fought for months to prevent the archivists from sharing those documents with the FBI, so that those agents could do their job of assessing any potential dangers posed to our national security by their mishandling.

Well, it turns out that not only were the returned documents not drumpf’s to do with as he pleased, some of them were not even from his time in office, making his pronouncements all the more laughable, and… curious.

“After Trump’s term ended in January 2021, Archives officials identified various high-profile items that had not been sent to their collection and requested they be located and turned over. What followed was a tortured standoff among Trump; some of his own advisers, who urged the return of documents; and the bureaucrats charged by the law with maintaining and protecting presidential records. Trump only agreed to return some of the documents after a National Archives official asked a Trump adviser for help, saying they may have to soon refer the matter to Congress or the Justice Department.

Nearly a year later, on Jan. 17, 2022, Trump returned 15 boxes of newspaper clips, presidential briefing papers, handwritten notes and assorted mementos to the National Archives. That was supposed to settle the issue.

Instead, when Archives employees began opening up and sifting through the material, they noticed an immediate problem. The boxes arrived without any kind of logs or inventories to describe their content, according to a person familiar with the recovery. Instead, they contained a hodgepodge of documents, including some that didn’t even come from Trump’s time in the White House.“

Now, that just begs the question; what records from previous administrations did the ex-felon and blackmailer-in-Chief seek to keep for his own future use, and, if some, presumedly considered valuable by der Gropinfuhrer, were returned last January, then what the hell kind of information from the past do the others that he kept – and are causing all his convoluted present legal and extra – legal gyrations, contain?

Perhaps results from the Intelligence Community concerning the disturbing contacts he has maintained with Moscow for the last thirty some odd years?

Or maybe he is interested in covering up his father’s involvement with the “America First” crowd back in the late 30’s and 40’s?

Perhaps he is motivated to embarrass his predecessor Barack Obama by revealing confidential records of his prosecution of the wars in Afghanistan and Syria?

Or maybe he wishes to gift his favorite publication The National Inquirer with some juicy scoops about Area-51 or the JFK Assassination.

Unfortunately we will probably never know what secrets drumpf sought to clutch to his flabby breast and call his own.

The archivists and FBI agents will no doubt sworn to secrecy, and the files, or even the existence of them, deemed too volatile and too threatening to National Security to discuss or acknowledge.

Yet some were allowed to sit amoldering in Mar-A-Lago’s basement as the FedGuv wrangled with fatso’s lawyers.