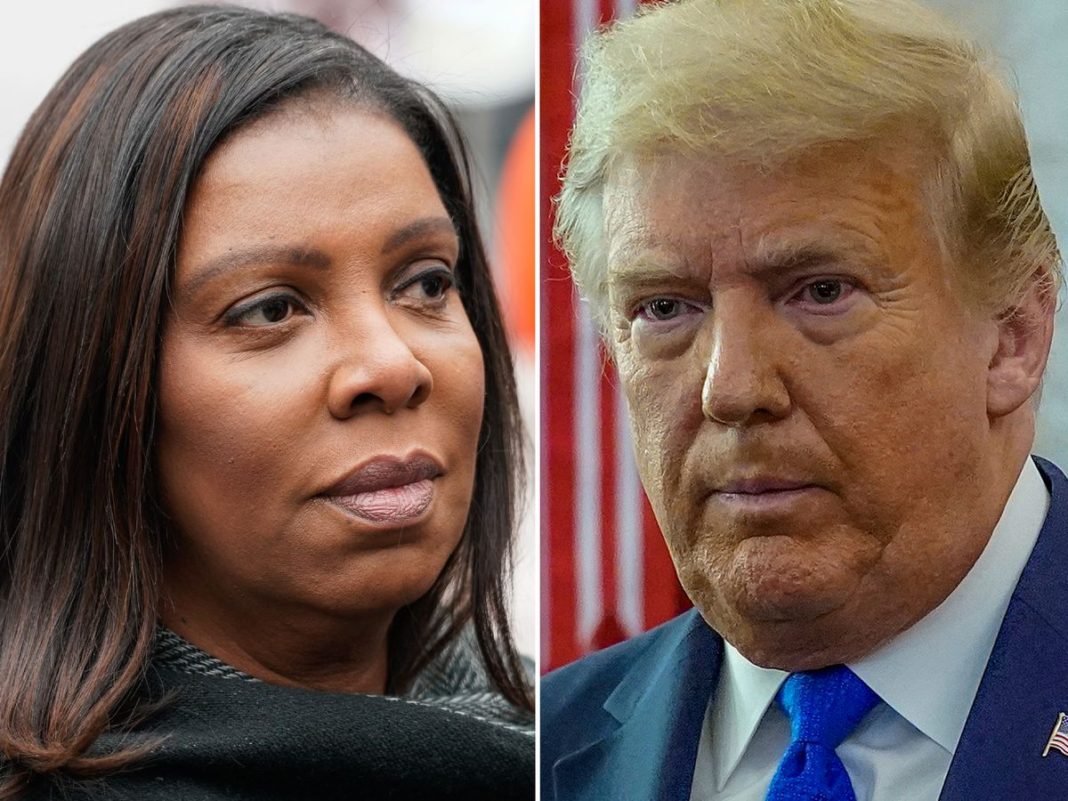 Donald Trump is nervous. You can always tell when he’s nervous, because the first sign is that he starts kicking out *presidential* statements, which is his poor surrogate for his Twitter account. How he misses Twitter. His thumbs itch uncontrollably and his hands twitch in his sleep, remembering the embrace of his beloved Twitter, now lost to him forever.

Trump sent a broadside via email hurtling towards Leticia James this morning, because she didn’t quiver and quake at his latest specious, makeweight lawsuit. She called it for what it is, a delay tactic.

The Trump Organization has continually sought to delay our investigation into its business dealings, and this lawsuit is yet another attack.

Mr. Trump doesn’t get to dictate this investigation. We will continue undeterred because no one is above the law.

As you know, truth burns Trump like holy water burns Dracula and here was his reply. 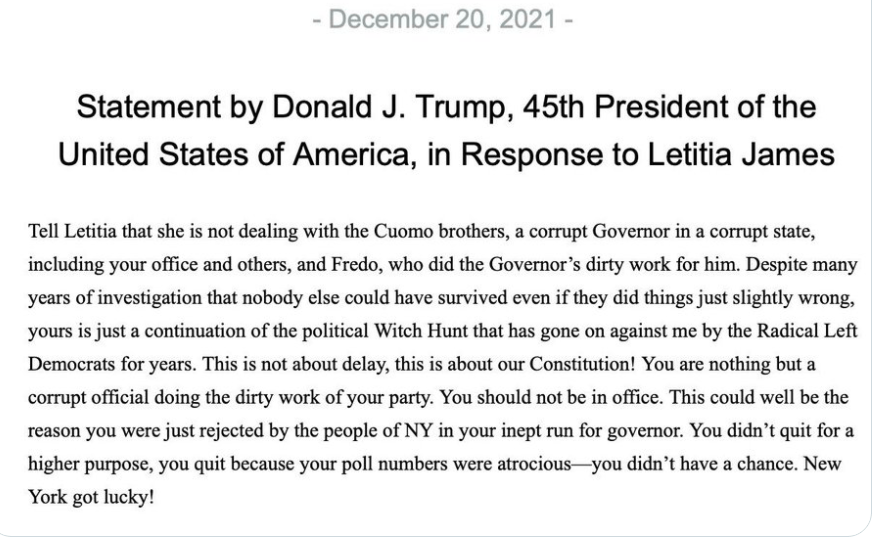 Trump is seeking a court order barring the investigation from going forward and that’s not going to happen. Frivolous doesn’t even begin to describe this lawsuit, but desperate does. Law and Crime:

Donald Trump and the Trump Organization filed a 30-page federal lawsuit against New York State Attorney General Letitia James (D) on Monday morning, requesting a court order to stop James from investigating or prosecuting Trump. The former president argues that James’s promises to hold him accountable for wrongdoing amount to illegal bias, and that he is constitutionally entitled to protection from the judiciary. That lawsuit, filed in U.S. District Court for the Northern District of New York, takes the case out of Trump’s onetime home in Manhattan and into Albany, the state capital.

Trump’s complaint attempts to use the attorney general’s own words against her by quoting James’ statement “no one is above the law,” and admonishing that, “law enforcement officials have a sacred duty to wield the state’s police power in a fair and impartial manner, without the slightest hint of favor, animus, or personal bias.” By contrast, Trump argues, “she has flagrantly abused her investigatory powers to target her political adversaries and advance her career,” has waged “relentless attacks,” and has “tirelessly bombarded him, his family and his business, Trump Organization LLC, with unwarranted subpoenas in a bitter crusade to ‘take on’ the President.”

The complaint continues, listing various statements James has made regarding Trump as evidence of James’s bias against the former president (the NRA, which James is attempting to dissolve, lodged similar complaints about alleged bias). James, Trump says, “embrac[ed] the ‘resistance’ mentality” against him, making promises to prosecute Trump for corruption while having no firsthand knowledge of his business dealings.

The gravamen of Trump’s dispute appears to be that James said some unkind things about him to other Democrats and therefore the judge should dismiss the case. Whut? I know.

In actuality, Goldman’s comments  — made to the New York Times in December 2018 — downplayed the likely impact of James’s statements. According to the article, “Goldman… said that it was unlikely that Ms. James’s remarks could directly lead to a dismissal of charges against Mr. Trump.” Goldman allowed that any statements that might be construed to show bias, “could have an impact on the way a judge rules,” in a “close call along the way,” but that Trump “would have to show a stronger factual basis” to prove legally actionable bias.

In August 2020, James filed a motion to compel the Trump Organization to turn over documents and testimony regarding multiple properties and transactions. Trump responded by publicly declaring New York to be an “anarchist jurisdiction.” James parried, calling Trump’s statements a “pathetic” attempt to distract the American public from his failures managing the COVID-19 pandemic.

Attorney General James responded to the lawsuit in a statement Monday, calling the Trump lawsuit an “attempted collateral attack” and telling the former president that no one is above the law, “not even someone” with the Trump name:

Trump has never been held accountable for his actions in his entire life. According to his niece, Mary, he has either run out the clock or outspent his opponents and that’s how he “wins.” Unfortunately, the talk show host stepped into a different league when he became president and broke laws like the ones he broke. And the New York attorney general isn’t going to back down.

This is going to get intense. Stay tuned.