Jingle bells, jingle bells, this story will put you in the holiday spirit. It looks like Cyrus Vance is going to play Santa Claus this year and give us all a present that we will be delighted to see, Donald Trump being fitted for a costume matching his complexion. Like Al Capone, his tax fraud will trip him up. Trump has already been to court for committing civil tax fraud, when he decided to tear up the income tax return prepared by his accountant and lawyer and substitute his own version of the figures.

But as spectacular as it might be to see Trump indicted for tax fraud, it actually gets better. David Cay Johnston, a Trump biographer and tax expert, believes that the key charge will be for racketeering.

I can hear the reindeer on the roof now. Listen to this six minute clip from MSNBC, it will make your day.

Supposedly five million pages of data was handed over by the Trump Organization to the D.A.’s office. That’s a small library of Trump malfeasance. And as comprehensive as it may be, I’m willing to bet it’s the tip of the iceberg.

This is a story you’ll hear for the rest of this year and it will ring in the new.

The tide may finally be turning against Trumpty Dumpty. He may believe he’s omniscient, but the fact is that the legal wheels have been grinding all this time and he’s also despised by establishment Republicans. Both those things are going to cripple his influence going into 2022-24, even though he thinks he’ll continue to get away with all his misdeeds, simply because he always has. I wrote a few days ago about how Mitch McConnell is fed up with Trump and when the dust clears only one of them will be standing. I believe it will be McConnell. Trump is just passing through the GOP on a transactional basis. McConnell is the GOP, as an institution.

It’s five o’clock on the east coast now, at the time of this writing. I’ll bet people are kicking off Saturday night toasting this new event. They may be isolated due to Omicron, but I’ll bet they’re celebrating.

And this will add to the cheer: A little birdy must be whispering in Trump’s ear because here’s what he sent out this afternoon with his usual packet of b.s. 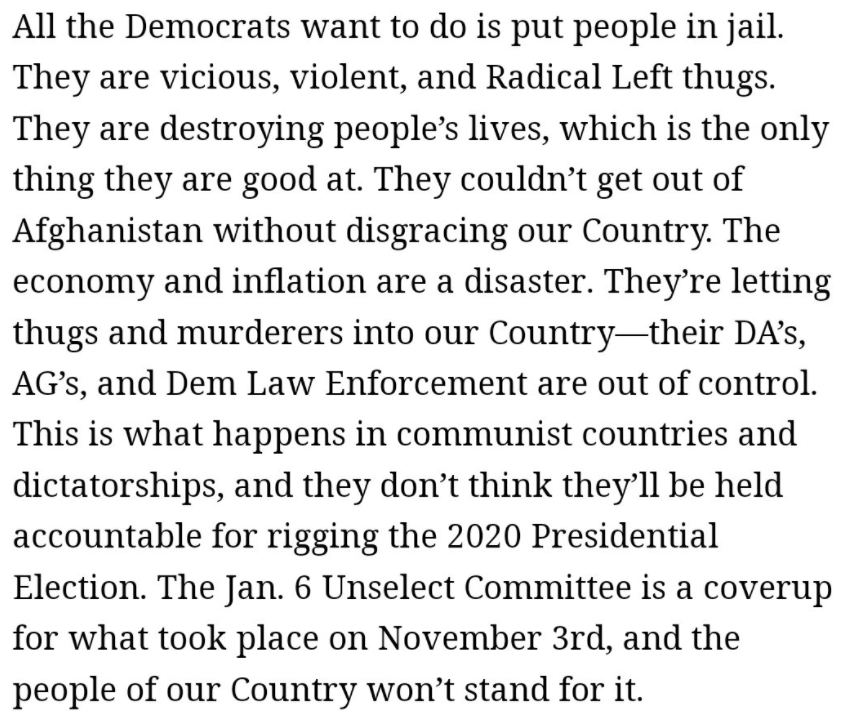 Maybe he can embroider that and hang it in his cell.