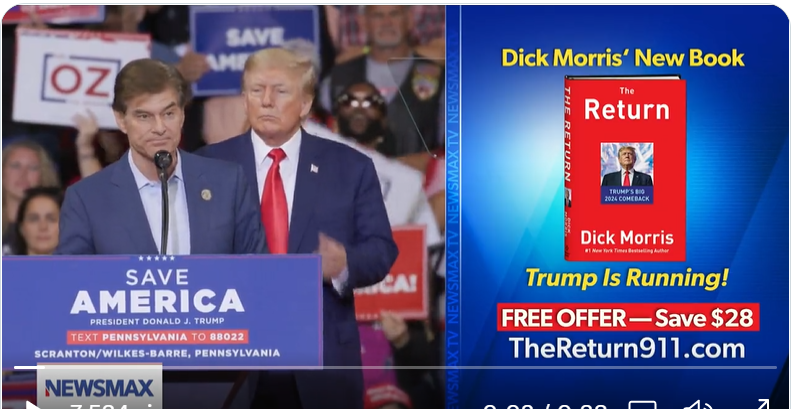 Trumpty Dumpty makes Freudian slips all the time. It’s interesting that he does, because typically if somebody makes a Freudian slip it’s on a subject that they’re afraid to comment on openly, hence the truth slips out unexpectedly.

But not Trump. He makes Freudian slips on topics that he addresses not only openly, but daily.

Saturday night, Trump was bragging about how well all of his endorsees do, “99%” he went on and on. And then he said what a great “representative” Mehmet Oz would be. Umm….he was running for the senate, last we knew. My take: I think that Trump was too afraid to say the usual, “the next senator from the State of Pennsylvania” because he knows it’s not going to happen. His subconscious wouldn’t let him. Or, maybe I give him too much credit. Maybe he just flat out doesn’t know what Oz is running for or the difference between the upper and lower chamber of congress.

Trump: Oz is going to be a phenomenal representative for Pennsylvania pic.twitter.com/lQs2Ue68rX

Here he is trashing John Fetterman for being a trust fund baby.

I can’t wait to hear Fetterman reply to this. It will be epic.

Fetterman is banking on picking up steam in rural areas of Pennsylvania.

I don’t know who needs to hear this but… No County will ever be too small or too 🔴.

It takes a 67 county Democrat to flip this seat 🔵. I’ve done it before and I’m ready to do it again.

Every County, Every Vote 💯

In recent days the polls have narrowed but Fetterman still maintains a lead — although not as much as the 13-point one he held just a week ago.

This is going to be a widely watched contest.

I wonder, just idly, do you think that any of the MAGAs picked up on the irony of Donald Trump calling somebody a spoiled rich kid, living off his parents’ money? Or, that just sailed right on by?