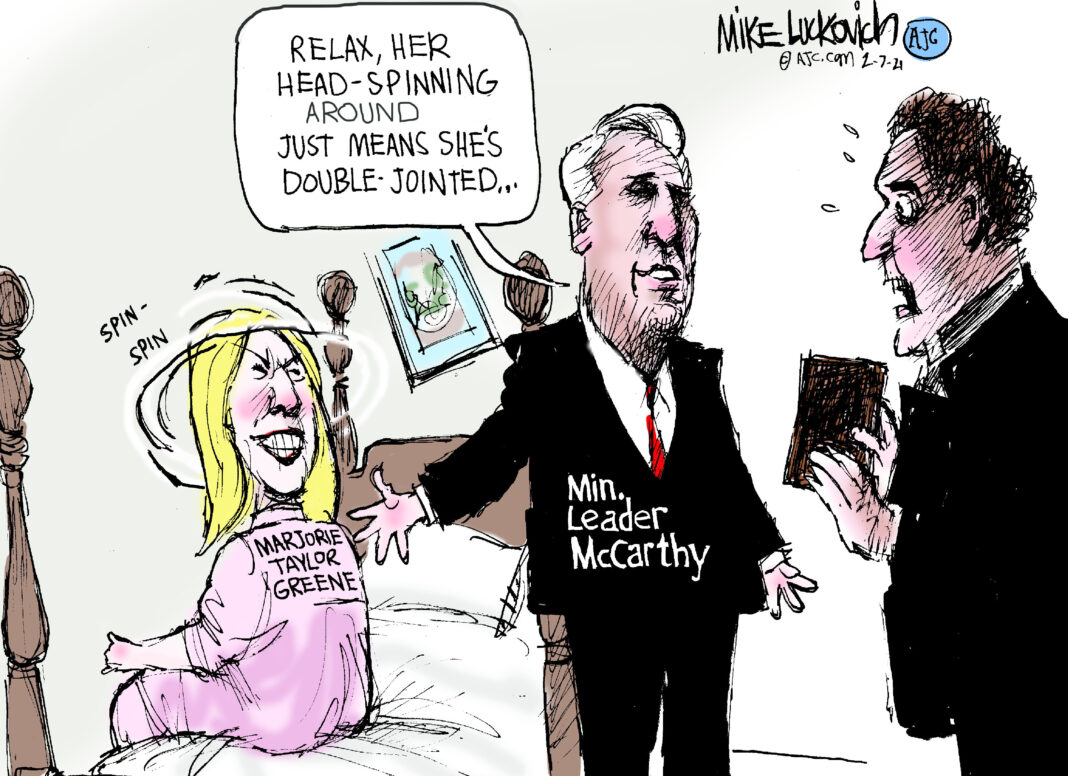 Georgia Firestarter Congresscritter Marjorie Taylor Greene reacted to the news of Merrick Garland’s appointment of a Special Counsel to investigate, and hopefully prosecute, the Orangeutan for his theft and probable distribution of highly sensitive classified government documents, in her typically incendiary, bombastic and dreadfully stupid way, by threatening to order her trained monkey Kevin McCarthy to reinstate the oft reinstated and then dis-instated Holman Rule – an 1870’s piece of legislation, championed then by an Indiana Congressman of the same name, intended to be used to eliminate patronage jobs prior to the enactment of Civil Service legislation – but which in modern times, has more often been misused by the Congress to attempt (mostly unsuccessfully) to punish Civil Servants whose actions they do not agree with.

The Rule was rescinded in 1895, restored in 1911, only to be dealt a nearly mortal blow in 1946 when the Supreme Court ruled that its use to try to defund the salaries of 39 executive branch employees accused of “Communist sympathies” amounted, essentially, to an unconstitutional Bill of Attainder.

Holman languished on the books largely unused until Tip O’Neill tried to drive a stake finally through it’s heart, rescinding it again in 1983.

But it was resuscitated once again by the Republican House in 2017, and attempted to be used in exactly the same way as SCOTUS had prohibited in 1946, by noted fascists Paul Gosar and Ron DeSantis. Both of these attempts were soundly defeated in subsequent House Votes.

Now Greene wants it to be used again:

“GOP Representative Marjorie Taylor Greene of Georgia says that the newly announced special counsel investigations of former President Donald Trump will be “defunded” after Republicans seize control of the House.

Attorney General Merrick Garland on Friday appointed veteran federal prosecutor Jack Smith as special counsel to spearhead criminal investigations of Trump, regarding the classified documents found in his Mar-a-Lago home and his activities surrounding the January 6 attack on the U.S. Capitol.

Greene predicted that House Minority Leader Kevin McCarthy will reinstate a little-known House rule after being voted in as speaker in January, with Republicans then moving to force the investigations to a grinding halt due to lack of funds.

“Holman Rule. Look it up!” Greene tweeted on Friday. “GOPLeader is going to put it in place. That means no money for Garland’s politically weaponized Special Counsel. Don’t promise too many jobs! Whoops defunded.”

Look it up!@GOPLeader is going to put it in place.

That means no money for Garland’s politically weaponized Special Counsel.

Don’t promise too many jobs!

It is my opinion that the 2023 Republican House, with its mixed and minuscule majority will not approve of this measure anymore than its 2017 version voted to back DeSantis and Gosar.

But what do others think?

The Holman Rule allows the House to amend appropriations bills to eliminate specific government jobs. It has never been successfully used in modern times. The amended bill would still have to pass the Democratic controlled Senate and could be vetoed by the President. 🧵

Obstruction of justice. Look it up.

How to say”I’ve been in Congress for 2 years and still don’t know how it works”. You must have thought you just pass bills/acts by bullying them like you do school shorting survivors. Votes. It takes votes. Kev isn’t a king just like Donny isn’t.

Greene, at this pace, is likely to learn hundreds of ways Congress doesn’t work during whatever tenure Georgia’s 14th district voters choose to inflict on the nation.

The only question is will her creature McCarthy attempt to sit her down and patiently explain reality to her, or just allow her to repeatedly embarrass herself?

I suspect he will do the latter.