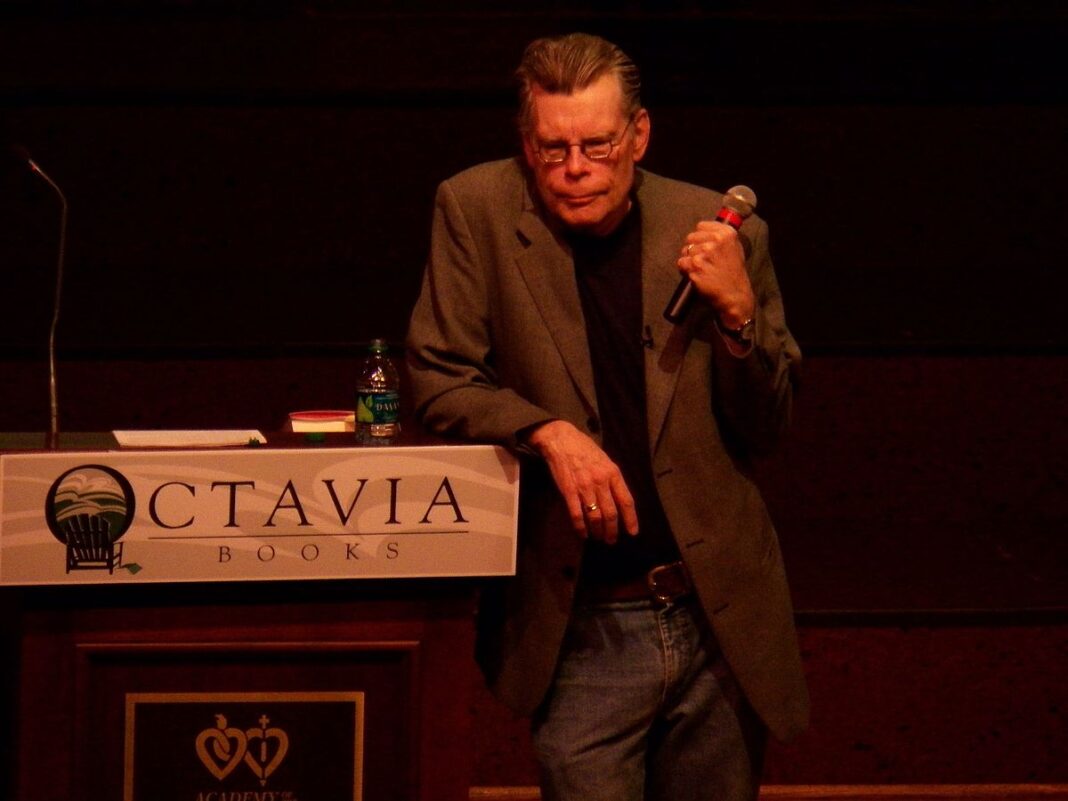 The handwriting is on the wall in neon that Elon Musk simply does not understand the nature of the beast that he just paid $44 billion for. One of his latest ideas is to charge owners of verified checkmarks $20 a month to possess those checkmarks.

What Musk doesn’t grasp is that the people who have the verified checkmarks are professional journalists, politicians, celebrities of all stripes. They are posting content on Musk’s platform for free, and he should be thrilled.

But instead he wants to gouge the very people that make the platform viable. One such person is Stephen King and this is how that went. 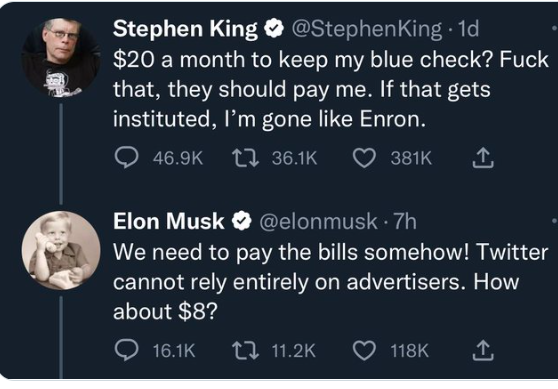 The hilarity here is that Musk thinks it’s about money.

Um…Elon? Stephen King is worth $500 million. He can well afford a $20 bill a month. He’s making a completely different point altogether. The point he’s making (I conjecture) is that Musk is not doing him a service by allowing him to post content. He’s doing Musk a service, as one of the most successful writers in the world, by posting his views and contributing to the platform. Musk should be kissing his ass, not trying to push a tin cup at him and collect a few pennies.

That said, Musk isn’t the only one who has no idea how Twitter works.

someone just told STEPHEN KING, one of the most iconic authors of all time, that twitters verification check is the only reason he’s relevant.
how is twitter even real omg pic.twitter.com/JXFDDHRchm

The last word of Loupey Gardener’s tweet is cut off. That word is “alive.” Can you believe that? King has written 65 novels, 200 short stories, had his work translated into different languages all over the world and produced for film and television — and Twitter gives the man his relevance?

Now one tweeter in a pack of 235 million people is one thing, but the owner of the platform not knowing which way is up is something else altogether.

A majority of people having blue check marks are journalists. Twitter is a wonderful news medium because it moves at the speed of light. A journalist — or anybody — can get on there and tweet something and if it’s an important, breaking story it’s out there in the world. That’s a tremendous advantage.

It’s also a tremendous downside, because as we saw this weekend, conspiracy theory and vicious libel can also travel at the speed of light.

The Musk Man, supposedly worth 12-figures, trying to squeeze the cost of a sandwich out of Stephen King. Truly, the internet is a gift. pic.twitter.com/js55TPhkE1

I can’t wait to hear how $20 per month for a blue checkmark is going to defeat bots and trolls.

What I really believe is going on here is that Musk doesn’t know what he has his hands on and frankly that’s scary. I think the best hope that we can hold is that he decides to sell Twitter to somebody else. Say…maybe Stephen King would buy it? He won’t pay $44 billion but he could certainly pay something and the day may soon dawn when Musk runs the place into the ground sufficiently to where he’s happy to pick up anything.

I’ll share a personal note with you here. This Twitter debacle hits me where I live. As you may recall, PolitiZoom used to have a sister site, Daily Sound and Fury. Our work was simultaneously cross-posted on the other site and we took a split of their ad revenues, plus they did all our technical support. It was a good system, worked for years.

Long story short, that site was sold in the last days of 2020. In January, 2021 I was in negotiations with the new owners of DSF and they told me that they “didn’t have to pay” for my (“my” meaning myself and all the other PZ writers’) work, per the Creative Commons license. I said, “That’s true. It’s also true I can modify the license to where that isn’t true.”

I was then “offered” the “opportunity” to give them our content in exchange for a hot link. Somehow the new kids on the block derived the idea that a hot link on their site was worth me giving away content that I could use to generate many dollars worth of ad revenue. This is analogous to your thumbnail telling your heart that you need it to scratch your arm more than you need to pump blood around the body. Clueless doesn’t even begin to touch it, and we won’t even talk about the implied insult.

I told them that without breaking news and original content they were going to plummet in the search engines, like a rock. And they did. The month after we left Daily Sound and Fury plummeted from 94K users to 28K users and then the numbers went down steadily from there. Media Bias did an update on them in late August and listed them as a Minimal Traffic site.

The new owners ended up losing their investment, whereas if they had played ball with me — and all I wanted was a 50/50 split —  they would be sitting pretty.

Point being, you can’t tell some people. They think they know how something works and they simply do not. In this case, the owners of DSF got rid of the site and fobbed it off on some poor guy who knows even less than they do and who, comically, told me that he was going to report me to the sheriff of Clark County — for insulting him via email, I think.  I didn’t know that was a crime. Is it a tort even? Didn’t think so.

Moral of the story: people who buy businesses that they do not understand have an expensive lesson coming to them.