It’s an axiom of politics that you watch advertising in the last six weeks of a campaign. Ads are pulled on candidates that the party has given up on. That happened earlier this week when Mitch McConnell canceled a $10 million ad-buy in Arizona for Blake Masters.

Now news is breaking that the NRCC has decided to throw J.R. Majewski to the wolves. Majewski is as Trumpian a candidate as you can get, down to the lying. It was discovered that he fabricated combat duty in Afghanistan. All he actually ever did was load planes in Qatar.

But hey, tell a lie big enough and they believe it, right? Maybe Majewski erred by not lying that he had been a special emissary from the Pentagon or some such.

Confirmed: Republicans pulling out — and all but surrendering — against Dem Rep. Marcy Kaptur, per R source familiar with House strategy. A Trump district.

He could still conceivably win. I wonder then if the House could refuse to seat him for lying about something that basic. Here we go again, shades of Roy Moore. 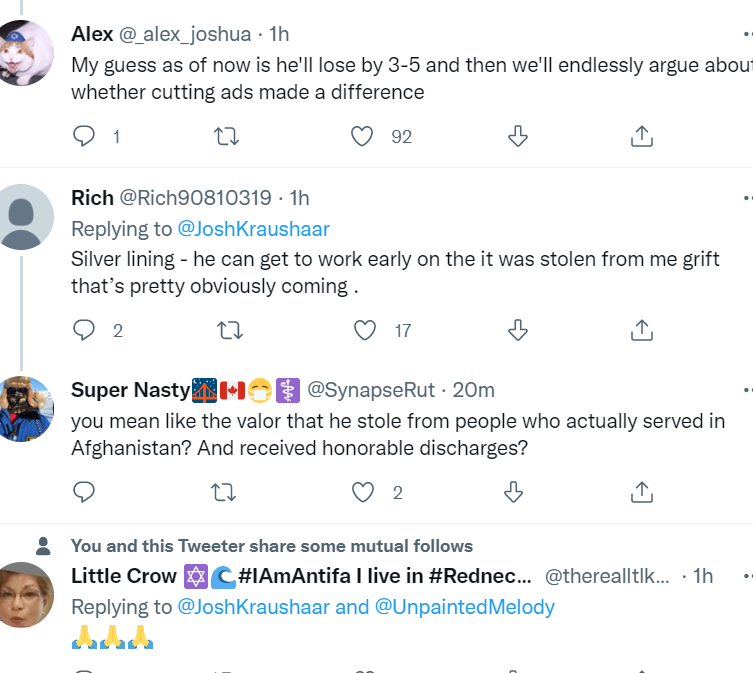 WASHINGTON (AP) — Campaigning for a northwestern Ohio congressional seat, Republican J.R. Majewski presents himself as an Air Force combat veteran who deployed to Afghanistan after the 9/11 terrorist attacks, once describing “tough” conditions including a lack of running water that forced him to go more than 40 days without a shower.

Military documents obtained by The Associated Press through a public records request tell a different story.

They indicate Majewski never deployed to Afghanistan but instead completed a six-month stint helping to load planes at an air base in Qatar, a longtime U.S. ally that is a safe distance from the fighting.

Majewski’s account of his time in the military is just one aspect of his biography that is suspect. His post-military career has been defined by exaggerations, conspiracy theories, talk of violent action against the U.S. government and occasional financial duress.

In other words, he’s a chip off the old Trump block. He knows how to get on TV and lie. This is apparently the new GOP. Lousy at politics but if you’re good enough at television, it doesn’t matter, right? At least that’s what their cult leader has proven to them. The great unblinking eye of TV is all you need to master, you don’t need to have any actual skills or ability for the elective office you’re seeking.

This is why the MAGAs love him. They know deep down he’s a loser. He gives them hope. If he can do it, so can I. Except he can’t do it — again — and the other fruit flies that he attracted into politics are dying swift deaths as well.