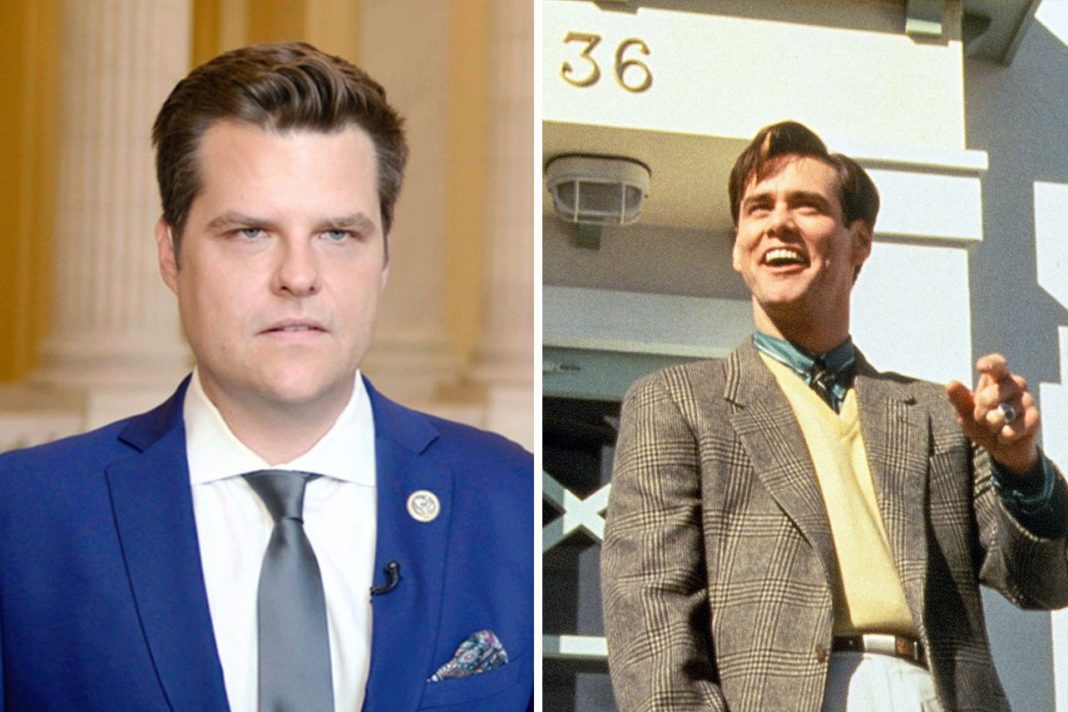 All the world’s a set and all the people merely actors, was the foundation of “The Truman Show” and everybody was in on the gag except the eponymous star of the reality TV show. Intriguingly, that’s also how another reality TV actor sees life, too, himself at the center of the universe and all other beings merely extras in his latest production number.  The White House was simply another set and season of episodes.

Matt Gaetz watched avidly and enviously, as he saw the emergence of the MAGA electorate, breast fed from infancy at the glass teat, pour to the polls to elect the angry populist that they saw on the tube. They had watched his TV show, so they thought they knew who he was. He said he could fix things and they believed him. The rest of a shattered GOP said, “Damn. Is that all there is to it? Just be crazy enough on TV?” And with that revelation, many of them threw the conservative agenda overboard and went for pure power, the only way they knew how, by imitating Donald Trump and hoping to be his successor.

Trump has no greater disciple than Matt Gaetz, who is currently attempting to utilize the Trump playbook to get himself out of the serious trouble that he is in. The Florida congressman has turned this all into The Gaetz Show, because as a MAGA media figure, that’s all he knows how to do. Right now it’s playing live from Miami Beach, just like the Jackie Gleason show, way back in the day. Richard Nixon was close friends with Gleason, just FYI. That was in an era where politics and television entertainment were two separate fields of endeavor, fancy that. Color that world gone. Politico:

MIAMI — Welcome to a special edition of Playbook from Miami. It’s time for an update on The Gaetz Show, which just came to town.

Battling anonymous leaks that he had sex with a minor or had paid prostitutes, Rep. MATT GAETZ (R-Fla.) appeared at Trump National Doral Miami on Friday night (where else?) and spoke to the pro-Trump Women for America First, delivering a speech aimed just as much at the crowd as the bank of TV cameras recording his stemwinder.

Basically, Gaetz did exactly what defense lawyers and establishment types in politics and media say an embattled pol shouldn’t do: He ran his mouth, and acerbically so. Gaetz swiped at the “lying media.” He decried the “smears” against him and the “distortions of my personal life … [and] wild conspiracy theories.” He pledged he “won’t be extorted by a former DOJ official and the crooks he is working with.” The alleged extortion plot is one of those odd twists that prove how Florida is stranger than fiction.

But that’s Gaetz. He isn’t an establishment type. He’s a MAGA media figure. He’s always starring in The Gaetz Show, perhaps a vestige of having grown up in the house where and while “The Truman Show” was filmed (remember: Florida is stranger than fiction).

Gaetz, 38, grew into his role as a TV figure shortly after arriving in Washington in 2017. In the seniority-based gerontocracy that is Congress, he realized that the path to political power and influence was to have President DONALD TRUMP’S ear — and the way to do that was by auditioning as Trump’s top defender on Fox News. It worked. Trump loved it and promoted him. Gaetz got a podcast (“Hot Takes with Matt Gaetz”). He penned a book (“Firebrand: Dispatches from the Front Lines of the MAGA Revolution”). He starred in an HBO documentary (“The Swamp”).

In his newfound celebrity, Gaetz styled himself into a ladies’ man, showing up to high-profile events with a number of different beautiful women. At a 2018 Republican Party of Florida Lincoln Day dinner in Orlando, he caused a stir by appearing with two dates, one of whom is a model for Monster Energy Drink and had competed decades ago in child beauty pageants against JonBenét Ramsey (remember: Florida is stranger than fiction).

Indeed it is. And there is a charming house in Florida, pure Americana, which was chosen as the picture house for the movie, “The Truman Show.” Gaetz not only grew up in this house, he lived there when “The Truman Show” was being filmed. I don’t see this as a piece of interesting esoterica, I see this as a spotlight into Gaetz’ psyche and I’m not the only one. Here’s what a critic reviewing HBO’s “The Swamp” had to say about Gaetz and the Truman house.

Today, the house is decorated with a sign not only confirming that it’s the Gaetz family home, but the picture perfect house from the Jim Carrey movie.

For Gaetz, this seems like a fun little aside. For me, it sort of unlocked Gaetz’s voracious need for attention.

From the get-go, The Swamp makes it clear that Gaetz has built his career around cable news soundbites. He starts his day by putting on makeup, fretting over how much weight he’s lost, and bragging that Ivanka Trump once complimented his shoes. Later he even admits that he strategically looks for the viral news moment during Congressional hearings over diligent work on legislation. And while he boasts that other junior representatives have asked him for advice, Gaetz admits that his high profile makes him a target. We hear death threats, watch him get “milkshaked,” and learn that he can’t eat out often at DC restaurants without causing a scene. You don’t necessarily feel empathy for Gaetz, but the picture of him eating takeout alone in his office is absolutely sad.

The Swamp also suggests that Gaetz’s obsession with viral stunts trolling the opposition might earn him points with Trump, but they kill the bi-partisan legislation Gaetz seems to earnestly want to see get off the ground. An amendment he was working on with Ro Khanna seems to start to lose its legs almost immediately after Gaetz tries to storm a private hearing for press. We see Khanna, who had previously been cordial with the Florida representative, immediately go cold on Gaetz and lambast him on the news.

Does Gaetz put this all together? Nah. He still puts attention-seeking antics and viral moments ahead of legislative work. And why wouldn’t he? It’s not just that’s how politics are today, but Gaetz may be psychologically affected from growing up in The Truman Show house. After all, that film was about a man who was living his life on camera. In the movie’s case, Carrey’s character didn’t know he was doing this. In Gaetz’s, it seems it hasn’t occurred to him that he could get more reforms through if he stopped chasing the cameras.

Gaetz isn’t going to just sail through this crisis unscathed. There isn’t going to be any surprising plot twist, 11th hour save for Gaetz. Because this is reality, and not television, he’s going to find himself, like Trump, dealing with the consequences of his behavior for quite some time to come.

That’s the logical finale, but meanwhile, getting there is going to be entertaining as hell. So kick back and watch The Gaetz Show. He’s getting plenty of attention, that much is sure, and you get to watch him go down in flames every morning — and if you don’t catch it then, not to worry, it will repeat and give you a good afternoon, good evening and good night. 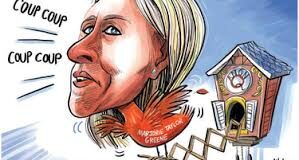