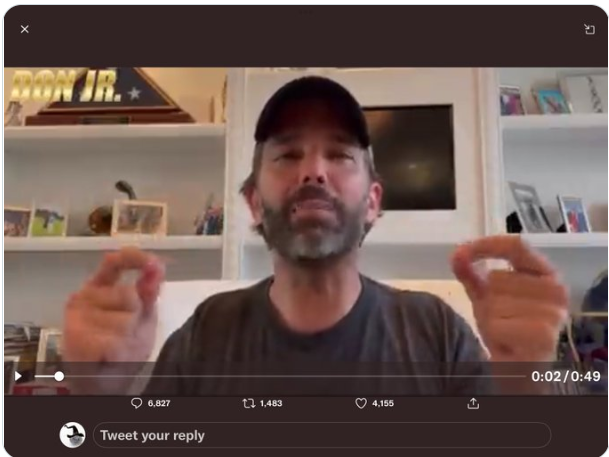 We had the Two-Minute Hate from Orwell’s “1984” and now we have the two-minute diagnosis — or speculation, at least, about what makes Donnie (both Junior and Senior) run?

Run into walls, specifically, and run on and on at the mouth.

It’s no secret that both are “animated guys” who frequently get in front of microphones, all bronzed up and blaring. How do they get that way? Here’s a hypothesis, which frankly is as good as anything else I’ve heard, and better than most.

My guest on this week’s pod was actor/comedian Hal Sparks. We broke down 10 clips this week. Here, Hal gives us his professional analysis of Trump and Junior’s possible drug use. pic.twitter.com/cA6pw08nPf

Full disclosure: I’ve never even heard of a lot of this stuff. It may be a process of aging, but nobody I know gets loaded beyond a cocktail or two, or good wine, or maybe a little weed. Gone are the days when I knew of a guy in the San Fernando Valley who decided to start a cocaine delivery service because then he didn’t have people coming by his house. He thought it was safer that way.

Hand to God, there was a time in the 80’s when I could have sat on my couch and gotten drugs delivered faster than I could have gotten a pizza. Just another L.A. marketing story. It didn’t turn into a fad, from what I know. This was a wild time in L.A.’s history. Daryl Gates was the Chief of Police and he used to show up at peoples’ doors with battering rams, all kinds of things.

Junior is getting skinny, Eric as well. Maybe they’re just worried about their future? I certainly would be if I had the State of New York after me.

Here’s the entire tape of these two chatting about the Trumps and other topics, if you care to watch the entire thing.

I’m sure Junior will issue another PSA from his basement, soon. I have the same kind of fixation with those as I do with Mike Lindell’s loony commentaries. I just can’t believe that they’re still going on. But they are. And they will. And in both cases, they will probably only stop when either there’s a court order to do so, or possibly one or both of these podcasters ends up inside the House of Many Doors.