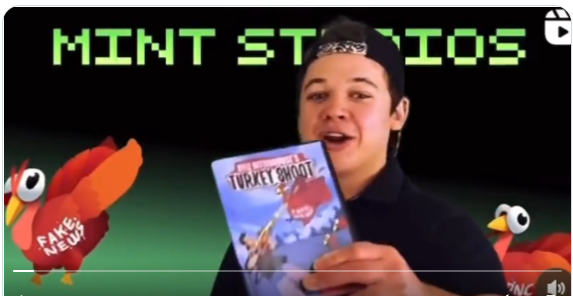 I guess young Kyle is having a painful time realizing that he needs to do what the rest of us do and get an education and go to work. His fifteen minutes of fame were too intoxicating and he wants to hang onto them — and not have to work. He just wants to be a MAGA star.

At least this is the only conclusion that I can reach from his newest entrepreneurial endeavor, which is a video game, here for the holidays, “Kyle Rittenhouse’s Turkey Shoot.”

Two interesting takeaways right off the bat: 1) Do you shoot turkeys in self-defense? Didn’t think so. 2) Intriguing that SCOTUS shows up in this video at this time, in this context, after being such a disappointment to MAGA cult leader Trump. Or, maybe that’s just coincidence. Ya spose?

Teach your kid to kill journalists in effigy by shooting fake news turkeys. Nothing wrong with that, right? Or, teach them to shoot turkeys with the wrong political views. Can’t have those liberal bias turkeys running around and clucking doctrine not your own right? How a First Amendment guy like Kyle wouldn’t see the irony there, we don’t know.

I'm attaching the following message to any post that mentions the murderer Kyle Rittenhouse. It's sickening to me to have him bandied about as if he's special because he got away with murder. Kyle also caused families to have empty chairs at their table due to his hubris. pic.twitter.com/HnIGghxgaT

Here’s the rest of what’s cut off, because the last line says it all.

The Rittenhouse saga started out ridiculous, went to insulting, went to a farce of a trial and now the result is sheer absurdity.

This is what’s known as jumping the shark. “The phrase is pejorative and is used to argue that a creative work or outlet appears to be making a stunt in a seemingly exhaustive attempt to generate elevated attention or publicity to something that was once perceived as popular, but is no longer,” according to Wikipedia.

Rittenhouse had the spotlight on him at one point. He was the MAGA darling. So called Christian websites were raising big bucks for his defense. That’s all gone now, but the star can’t move on. Like many a child actor before him, Rittenhouse can’t get adult parts and he can’t regenerate interest in what he did as a kid, because those days are gone.

And now, especially, with three more shootings in the past week, two of them mass shootings, the tastelessness of the gun machismo sickness in this culture is especially difficult to endure.

Get a job, Kyle. Grow the phuque up and learn how to do something besides grift and get a job. Or, join the military if shooting is all you want to do. Maybe they can properly develop your limited talents and your thuggish instincts into something useful.