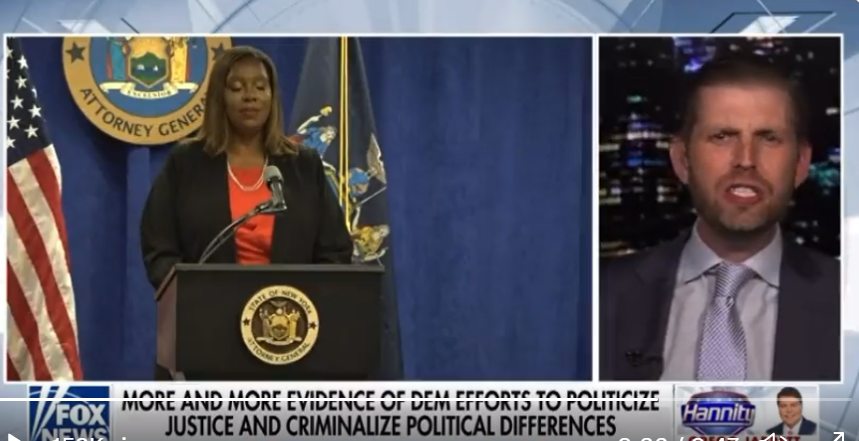 “Why sometimes I’ve believed as many as six impossible things before breakfast.” — Alice In Wonderland

If you think of all the impossible things we’ve come to believe since 2015, six is a piddling figure and yes, we can do that and more before breakfast every day, because the parameters of what was possible or impossible in politics changed so dramatically when Tangerine Palpatine became emperor of the GOP.

Here’s what happened in just the past few hours. Come, let us reason together, as LBJ used to say.

First, Rachel Maddow announced that Donald Trump’s lawyers have met in person with the District Attorney of Fulton County, Georgia.

ATLANTA (AP) — The prosecutor weighing whether Donald Trump and others committed crimes by trying to pressure Georgia officials to overturn Joe Biden’s presidential election victory said a decision on whether to bring charges could come as early as the first half of this year.

Fulton County District Attorney Fani Willis said in an interview with The Associated Press last week that her team is making solid progress, and she’s leaning toward asking for a special grand jury with subpoena power to aid the investigation.

“I believe in 2022 a decision will be made in that case,” Willis said. “I certainly think that in the first half of the year that decisions will be made.”

But Willis told the AP that she hasn’t imposed deadlines on her staff and has urged them to be thorough in their examination. […]

Willis declined to speak about the specifics, but she confirmed that the investigation’s scope includes — but is not limited to — a Jan. 2, 2021, phone call between Trump and Georgia Secretary of State Brad Raffensperger, a November 2020 phone call between U.S. Sen. Lindsey Graham and Raffensperger, the abrupt resignation of the U.S. attorney in Atlanta on Jan. 4, 2021, and comments made during December 2020 Georgia legislative committee hearings on the election. […]

Willis’ inquiry also is not the only state criminal investigation involving Trump. New York prosecutors have subpoenaed Trump and his two eldest children in their investigation of his business dealings.

A Trump spokesman dismissed the Fulton investigation as a politically motivated “witch hunt” when it became public last February, after Willis instructed Georgia’s top elected officials to preserve any records related to the general election, particularly any evidence of attempts to influence election officials. The probe includes “potential violations of Georgia law prohibiting the solicitation of election fraud, the making of false statements to state and local government bodies, conspiracy, racketeering, violation of oath of office and any involvement in violence or threats related to the election’s administration,” the letters said.

Willis said she has not yet decided whether to ask the chief judge of the Fulton County Superior Court to impanel a special grand jury. While she could decide whether she has enough for an indictment based on evidence and witnesses who speak with her team willingly, she said, a special grand jury can be helpful to compel people who refuse to testify without a subpoena.

“I like investigations to be complete and so we probably would move in the direction of a special grand jury,” she said.

Then Trump’s lawyer showed up on Newsmax and her villain du jour is Letitia James, not Fani Willis.

Trump’s lawyer tonight said that they filed for an emergency injunction to try and stop Letitia James’ investigation because “she is a sick person” who has “taken her oath of office and just weaponized it” to get Trump. pic.twitter.com/i6rgELdXNz

If you are wondering how we got to Letitia James when the big story of the night was Fulton County, Georgia and prosecutor Fani Willis, I join you in wonderment. But here’s Eric Trump on Fox News and he’s singing the same anti Letitia James ballad as Alina Habba, the lawyer.

So here we are. All we can do is speculate and conjecture. Possibilities include:

Where there’s smoke there’s fire. You may recall Trump’s unhinged rant of December 18.  Maddow says that tonight’s breaking news is the reason for it. Go to :57 where it starts.

That “seemingly unhinged statement” that Maddow refers to happened within days of the heretofore unreported in-person meetings between Trump’s attorneys and the Fulton County District Attorney’s office. That Trump would be upset about that makes perfect sense, now that we know what motivated the rant. And it is interesting that the attorneys would have felt the need to journey to Georgia to meet in person, in this day of COVID and Zoom.

So what motivated the apparition of the lawyer and Eric on Newsmax and Fox *News* respectively? We don’t know. But I think it’s very safe to say that other bombshells like the one that Maddow broke earlier Monday night are forthcoming and we’ll have another “ah ha” moment, and say, “That’s why Eric and Habba went running to the right-wing media outlets.”

Stay tuned. It’s only going to get nuttier, a mere one and a half weeks into 2022.