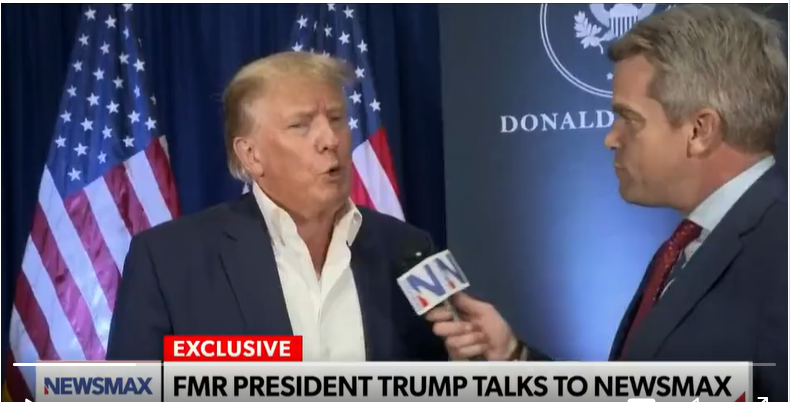 Nothing like fighting a battle when you have no idea why you’re even in the war. I mean, most people go to war for a reason, right? Because they need to redress some grave injustice, right? Not the MAGAs or their leader. They want to win back both chambers of Congress because. Just because. That’s the best reason you’re going to get, just like out on the playground in third grade and it didn’t make much sense even then.

My favorite Trump impersonator is J-L Cauvin. Cauvin won’t be able to satirize this, because this already sounds like one of his pieces.

If Joe Biden ever had a moment like this, all the cameras at Fox News would burst into flames and the anchors would have strokes, simultaneously.

This reminds me of when Trump was repeatedly asked during the 2020 campaign about his top priority for his second term and he could never string together a cogent answer https://t.co/VaQ8Fnvlpf

And this is nothing new. It’s always been this way.

He was the first candidate without a platform.

It was basically “just vote for me, bro” (and his followers did). pic.twitter.com/ILZg9oqk9N

Now don’t drive a car or operate heavy machinery when you see this next clip. Memorize this woman’s face. You’ll soon see her campaigning for a House seat on the GOP ticket.

It’s this… only somehow even dumber and with 1400% more neck fupa. pic.twitter.com/YPTtblG0od

If Trump sees this he’ll offer her a cabinet post. You know he will.

This is the future of the GOP, right here, and what you saw this weekend in Arizona. Charlie Sykes, the Bulwark:

On Saturday night, Republicans got a glimpse of the future that Donald Trump has in store for them, and it looks very much like the past, but even more deplorable. And, frankly duller.

It wasn’t just his performance at the rally — which was basically an “updated version of Trump’s usual America-first rhetoric, long on personal boasts and lacking in subtlety,” — or the election lies, the white identity politics, or his continuing attempts to re-write the history of the January 6 Insurrection.

You could see the GOP future in the whole show: a rally that featured all the misfit toys embraced by the Once and Future God King. The My Pillow Guy, Mike Lindell, was there, and treated like a rock star rather than a mental patient off his meds. Indeed, Trump’s rally featured the whole pantheon of deplorability; Rep. Andy Biggs and Rep. Paul Gosar were there, along with the state’s batty party chair, Kelli Ward. […]

The man was “Blacks for Trump” founder Maurice Symonette, a.k.a. Michael the Black Man, a former member of a violent cult who posts anti-Semitic screeds and racist conspiracy theories online, and yet has been a featured member of the audience at Trump campaign events since 2016.

Despite all of that, Trump’s Arizona rally had a stale feel to it.

“Call it the Andrew Dice Clay conundrum,” writes Matt K. Lewis. “If your entire shtick is based on shock value, eventually the audience grows inured, and the lack of substance becomes embarrassingly plain.”

“An old rock band can get away with playing the same hits over and over, but provocative clowns like Trump need fresh material to stay relevant.”

Instead, Trump is offering the GOP his endlessly recycled grievances.

Michael Brendan Dougherty notes that Trump no longer offers his voters anything like a substantive agenda. When he first ran, Trump “promised to do things that voters wanted, to make the country great, proud, and prosperous again.”

This time around, writes Dougherty, “he is essentially asking Republicans to do something for him, to restore his tarnished honor and make credible his belief in his own victory.”

All that is left of Trumpism are Trump’s grievances and aspirations.

This is not an agenda that will win him high office, help his party, or accomplish anything for his countrymen.

Worse for Trump: at some point the act becomes less edgy than boring.

This is the ticket the GOP bought in 2016. Could they not see it? Because the rest of us were screaming that this was where things were going. Trump never had any substance or depth, only the ability to pull emotional triggers. That hasn’t changed. What has changed, and gotten worse, is that he’s become more desperate and he and his allies are willing to stop at nothing.