“Oh, what a wicked web we weave when first we practice to deceive.” — Proverb

Whether size matters is an absolute or not, it absolutely matters to Donald Trump. Every statistic in his life from his bank account to the number of votes received, to his ratings has to be the bigly-est, yuuugest, most historical figure ever achieved by a two legged creature on this or any other planet. And he particularly feels that way with respect to crowd size. Crowd size is a BFD in the Trump lexicon.

With that in mind, we compare the size of the crowds on the Trump/Bill O’Reilly “History Tour” where one serial sexual abuser who was terminated by his network interviews another serial sexual abuser who was voted out of office about what a grand contribution the latter made to United States history. The irony here is that the truly historical impact that Trump had on this nation, such as causing it to fall from the category of true democracy and be labeled as an “anocracy” will not be discussed. Nor will his historic two impeachments be mentioned, unless in some completely self serving and self congratulatory way. Same with the historic January 6 Committee formed as a result of Trump’s historic refusal to accept defeat.

Video of the crowd at the Trump event tonight in Houston with Bill O’Reilly, taken 20 minutes after the scheduled start time. Attached is the photoshopped fake crowd in his propaganda photo. pic.twitter.com/Kxlt26nSmp

And here’s the fake. 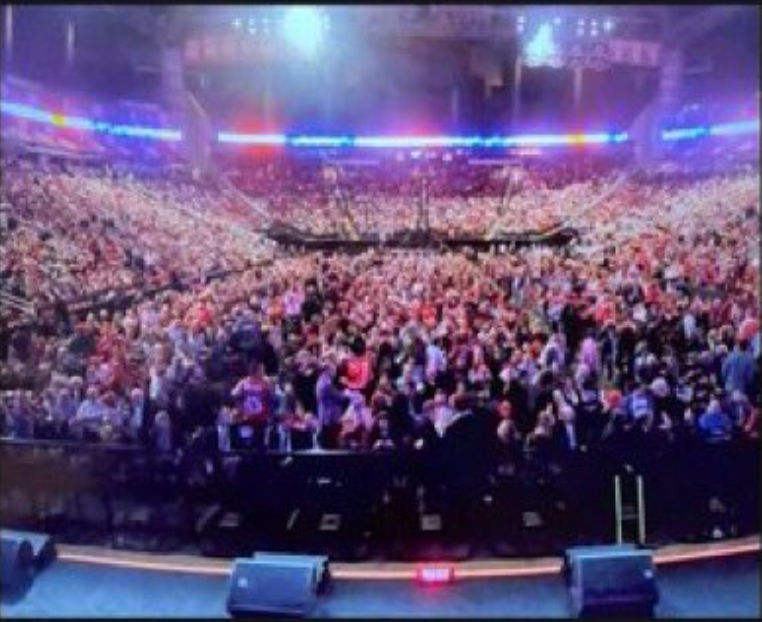 Here’s the link to his Statements release, which is how he disseminated it.

Trump was delayed in getting to the venue, although there’s some controversy about that. Supposedly flights were delayed due to weather, but it’s said that the delays were only 15 to 30 minutes and Trump showed up hours late to this event, leading to speculation that maybe he was waiting for the arena to fill. But being late is part of the Trump brand, whatever the reason.

Tomorrow Trump goes on to do Dallas. He’ll make a pit stop at Robert Jeffress’ Baptist Church, where he’ll do half of his annual Easter/Christmas religious appearance. And then he’ll go on to another stadium there. Let’s see if he fills it.

The Orlando Sentinel came out with some hard figures after Trump’s History Tour appearance there last weekend. He filled some 3,400 seats in a venue which can house three times that.

Consider it a blessing. These people are anti-vaxxers for the most part and if they were any more jammed together they would be creating a massive superspreader event. Although with Omicron leaping into action like it is, maybe that’s what’s happening anyhow. I am willing to bet the farm that both Trump and O’Reilly have their boosters, but if asked, Trump will waffle and say, “You need to have your freedoms.” Yes, you do. If you want the freedom to be stupid and die, then by all means, claim that freedom for yourself. Lots of luck in the next life.

And if you’re stupid enough to be both an anti-vaxxer and vote for Donald Trump, then truly, may God help you.