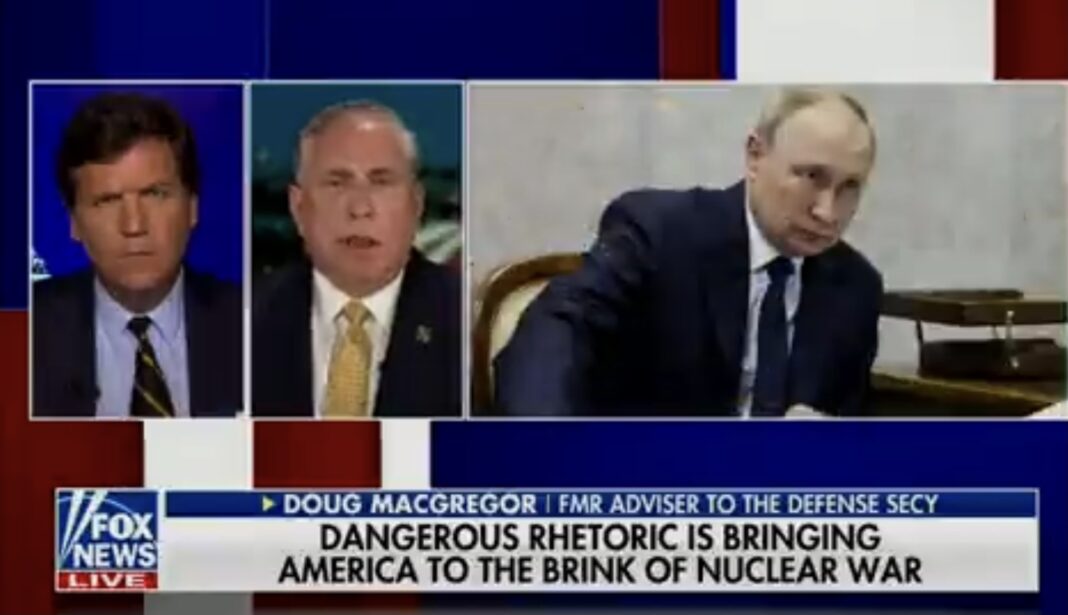 As Russia continues in Ukraine its destruction of civil infrastructure and once beautiful cities, as Putin pretends to care about only securing the Donbas and a land bridge to Crimea after failing to capture Kyiv and assassinate President Zelenskyy in February and March, Tucker Carlson and his guests continue to pimp the Kremlin’s stale propaganda on his nightly “news” show – proclaiming that the war is the fault of the Ukrainian people and their desire to throw off the yoke of oppression Moscow has place upon them for decades, and the fault of Europe and the U.S. for promoting their right to do so.

Last evening’s guest on the Carlson Kremlin Apologist hour was Douglas Macgregor who, for want of a better comparison is somewhat of a General Patton type figure; Macgregor made his reputation as a brilliant armor commander during the first Gulf War against Iraq in 1991 by cutting through and decimating a contingent of Iraqi tanks at The Battle of 73 Easting, which is described as “The last great tank battle of the 20th century” by some, though I would contend that The Iraqi Republican Guard was no Panzer Corp, and its commander, whose name is lost to history, no Rommel.

Though Macgregor swashbuckled his way into U.S. military history with this achievement, his commanders were less than enamored of his exploit, contending that he out-ran his air support during the maneuver, endangering his troops, and had failed to keep them appraised of his movements. As a result, though he had significant support with-in the ranks, he was passed over for command three times… relegating him to the station of in-the-rear command colonel for what would have been the rest of his career.

Rather than suffer this perceived indignity, Macgregor retired from the military in 2004.

Long story short, like his fellow embarrassed army careerist Michael Flynn, Macgregor sought succor for his wounded pride in Russia, popping up on Russian Television (RT), after the annexation of Crimea in 2014, to rail against the U.S. for our actions defending Kosovo against Russia’s ally Serbia in the 90s, and encouraging Russia to take over not just Crimea, but also the Donbas region of Ukraine.

Again compressing his story just a bit, this stance on RT made him a perfect candidate for the Trump administration, and he was appointed as a senior advisor to Acting Secretary of Defense Chris Miller in 2020.

Make of that what you will.

Now, on to the Tucker appearance last night, where Macgregor alleged that Ukraine has no hope of winning the current conflict, that it is “bled dry” and the war is the fault of the U.S. and it is the U.S., and not Putin, who raises the specter of nuclear war.

This kind of rhetoric is so false and dangerous that it should be criminal. There must be a way to hold @FoxNews accountable for these reckless lies.
Boycott is not enough.@FCC

At what point does Fox pull Tuckyo Rose? How long does Rupert Murdoch get to profit from active gaslighting and spreading Russian disinformation in a time of war?

Say what you will about Tokyo Rose, but she never pretended to be an American Patriot.

https://t.co/OrUFqFYq1l
What 'Putin Wing' Ex-Colonel Douglas Macgregor Has Said About …

What is it about retired senior Army officers and the Extreme Right these days??

Like the rest of the right, they feel slighted.

Tucker is a Weapon of Mass Deception.

Fox News continues to be a poison, undermining democracy both here and abroad.

And a third or more of America watches it religiously.