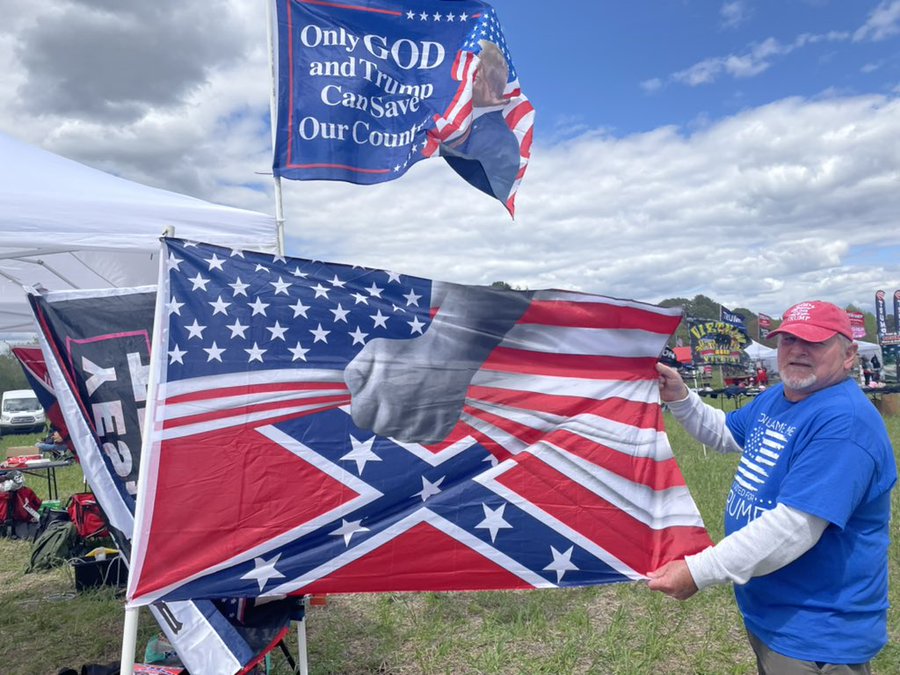 “I guess the definition of a lunatic is a man surrounded by them.” — Ezra Pound

Donald Trump running on the platform of his honesty is a little like the Phantom Of the Opera running on his looks, but that, ladies and gentlemen, is what is being broadcast into the North Carolina night as the MAGA klan convenes, yet once again, in the darkness — both literal and spiritual. Tonight the crazy is as thick as the tanning butter. Trump is up there sweating and gleaming with both.

But don’t take our word for anything, let’s just watch.

Trump says Letitia James is no longer working as the AG pic.twitter.com/ycxz2ddduC

And here’s this tasty morsel.

Trump: I’ve gotta be the cleanest— I think I’m the most honest human being perhaps that god ever created pic.twitter.com/D98itzA6vi

If you’re still with us and you haven’t passed out cold yet, here’s where it went next.

This incredible conman & imbecile was the President of the United States for 4 years. https://t.co/ztqAmst0Dc

Here’s a little preview of coming events: The Oz endorsement is one that a lot of Republicans are not happy with. Not a tall a tall.

Did I say they aren’t happy about the Oz endorsement? pic.twitter.com/qDedx5DT72

You'd get three days of programming on Fox News if Joe Biden had said this https://t.co/k72EeyRPHX

Trump's North Carolina rally is news, in that a lunatic is not only a former POTUS but the presumptive 2024 GOP presidential nominee. But it's also not news, in that he's out there saying pretty much the stuff over and over. His material has barely changed over the past 4 years.

That’s true enough. Here’s a rerun from earlier in the week.

Trump: I’ve been investigated by the Democrats more than Billy the Kid, Jesse James, and Al Capone combined! pic.twitter.com/JLRqgOLPWf

All that’s left now is for Trump to spout from the podium, War is Peace, Slavery is Freedom and the MAGAs to cheer. Wait for it. I, for one, won’t bat an eyelash. I’m too numb. The scar tissue on my nerve endings has scar tissue of its own.