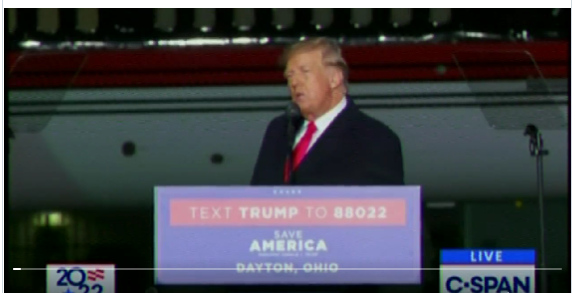 If this was a movie there would have been a cut away shot to J.D. Vance when Donald Trump executed him publicly. But there isn’t and so we’ll have to imagine the look on Vance’s face.

I predict that the pundits are going to go ape$hit over this. Again, this is one of those cases of first impression that Trump is so known for. Don’t bother Unprecedented, she collapsed long ago and went to Semantic Heaven. We need another word to describe this.

Behold, the titular head of the GOP knifing a senatorial candidate on Election Eve. You won’t see this one again, my friends.

Trump on Vance: He won’t be owned by me. I would love to own the guy but I don't think he will be there for me but that's ok. I'm doing the right thing for the country, pic.twitter.com/bjtW1MW5wE

My immediate gut reaction is that Trump is having a psychotic episode here and he simply has to stick it to J.D. Vance for the nasty things Vance used to say about him.

Vance is ahead in polls, at least if the your the averages from FiveThirtyEight and RealClearPolitics. They show Vance ahead 5.4 points and 7.5 points, respectively. These are poll aggregators, which the GOPers are manipulating to some extent.

A Suffolk University/USA poll from mid-October had the race neck and neck.

Who knows? This is what is crazy making about the night before an election. It becomes guessing.

Back to the trenches. It’s going to be a bumpy night, to quote Bette Davis.