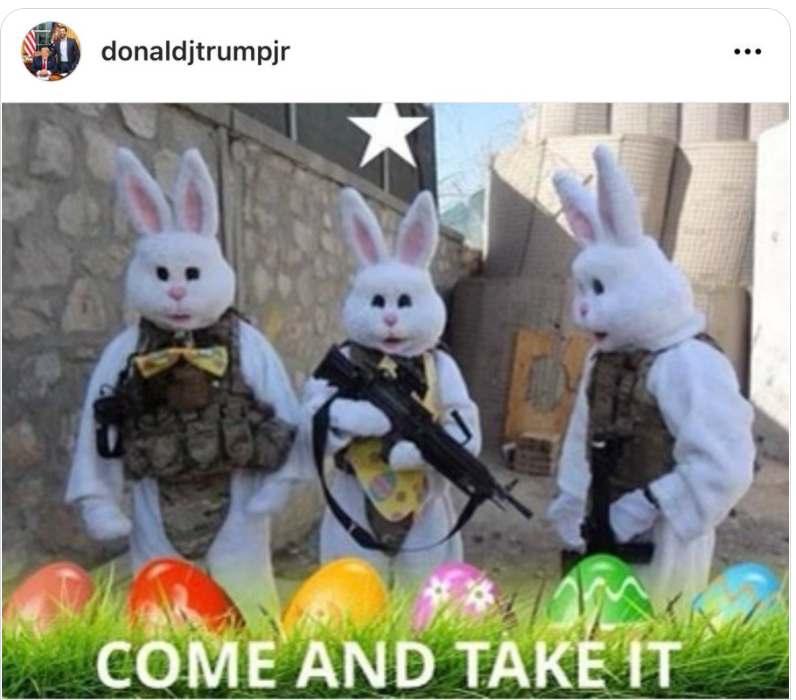 Everybody awaits the inevitable crack up of Donald Trump, Jr., but maybe it won’t be an event. Maybe it will be just a gradual descent into incomprehensibility. He’s made a good beginning in that direction this weekend, as you will see as your read a bit further. You see his pleasant message to children at Easter. Isn’t that cheerful? Especially with two mass shootings in South Carolina and one in Pittsburg this holiday weekend, not to mention the one earlier in the week in New York. Psst…Junior….rabbits don’t kill people. Gun freaks like yourself do.

And it gets worse. Take a look at this. Maybe you should blow a line or two of cocaine, if you have any handy, because I think you need to be loaded to understand this tweet. But let’s try.

Does anybody know WTF he’s talking about? First of all, Daddy owns Truth Social and if Elon Musk gets his hands on the power levers of Twitter, game over for Truth Social — not that it isn’t that already, but Musk owning Twitter would absolutely assure Truth Social’s fate.

Then there’s “literally worse than Pearl Harbor.” Okay. Approximately the same number of people died in Pearl Harbor that died on 9/11, let’s just say 3,000 to have a working number. So, “literally” 3,000 people are going to die when/if Musk takes the helm? Is this making any sense?

Maybe he thinks we attacked the Japanese at Pearl Harbor and it was a major American victory? The man is that completely stupid. The former president of Estonia once compared him to a pike, which is a fish with a very small brain.

There are other comments on Twitter which disparage Junior for being critical of the military, if in fact that’s what he’s doing. I think the man “literally” does not know that the attack on Pearl Harbor was a horrible thing. I guess he never heard that famous snippet of FDR’s, solemnly intoning, “last night, December 7, 1941, a day that will live in infamy the United States of America was attacked by the Empire of Japan.”

That was a grim day in American history, indeed. But when Elon Musk takes over Twitter it’s going to be an even worse day for America and that’s a good thing because?

I stand by my original point. Junior is losing it cognitively. It’s now only a question of whether Senior loses his marbles to Alzheimer’s or if Junior loses his to the White Lady, as Junior’s drug of choice is called in some circles, first. Right now, I’d say it’s even money.