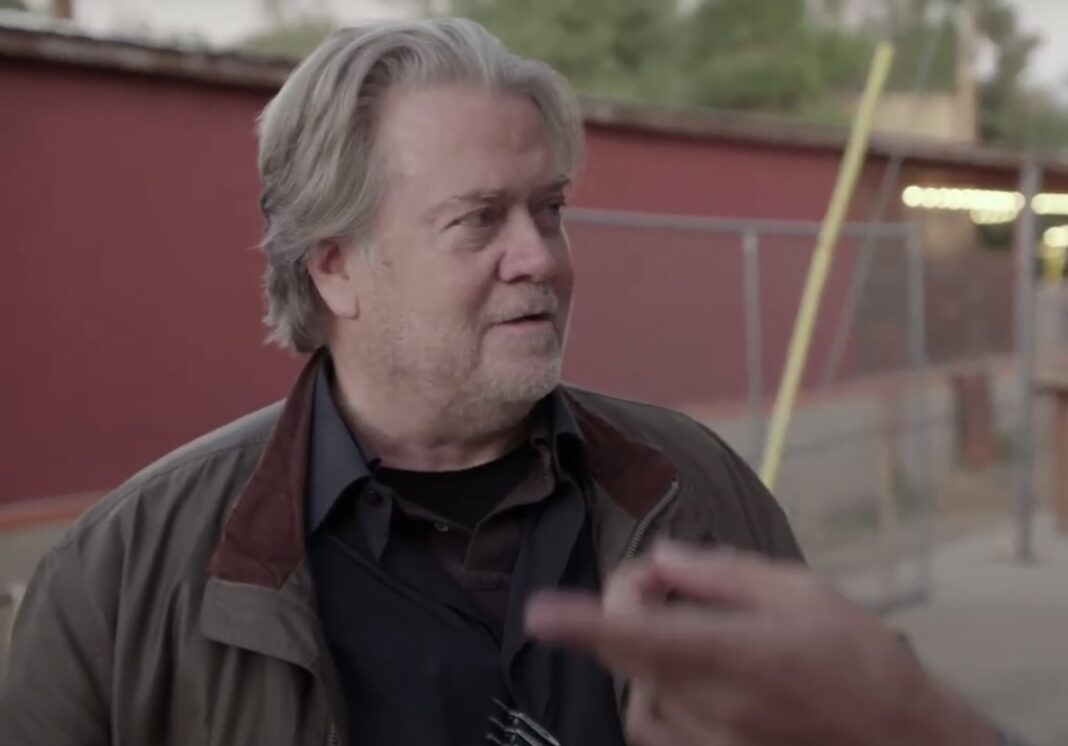 For those of you not familiar with southern colloquialisms “Grinning like a ‘possom eating a briar” refers to the expression that ugly marsupial wears on his face when he is trying to enjoy the sweet fruit of a briar branch whilst simultaneously enduring the prick of its super sharp thorns…used most commonly to convey the sheepish look of an inveterate liar caught peddling his own lies.

Now, I’m not saying Bannon is an ugly marsupial, which would be an insult to the ugliest of their kin, but if I were to do so I could say it without grinning like a ‘possom eating a briar.

In the below vid Bannon is questioned by Showtime’s The Circus guest host Tim Miller, who prods Bannon with a stick like one might approach a angry rattlesnake, and, when he can’t get him to admit his lying, stops the interview with an abrupt “you don’t believe this shit, I’m not doing this anymore.”

The top photo doesn’t really capture Bannon grinning at the smell of his own bullshit as he prevaricates about Kari Lake and then drumpf’s innocence regarding the Capitol riots (!) … you’ll need to watch the vid to appreciate it fully.

Love that guy. The clean one.

Yup. That’s the only way Bannon should be questioned.

Seems like money and power would gain you a better jacket.

He’s gotta bone to pick with society. Some girl probably hurt his feelings in junior high now society has got to pay 🙄

Every journalist needs to handle a carnival barker like Bannon the same way.

This was so good. Tim was like, “We both know this is BS. I am done here.” The best. Isn’t Bannon at least on house arrest? 🎪

Me three. Tim was masterful.

Masterclass….only one I ever saw that handled him appropriately.

The smile at the end gives it away. He doesn’t believe what he is saying. Also why is he wearing 3 shirts and 3 pens. pic.twitter.com/6iWaaHEt58

The grin in the middle is even more telling.

That was awesome! Absolutely awesome take down of Bannon! Yes!

A lot of folks are also commenting that The Circus should not have interviewed Bannon at all, but I disagree.

As long as the judge in Bannons case allows him to walk around free and make a mockery of Congress and it’s subpoena power, he’s gonna draw interviews, most with jornos just lobbing him softballs.