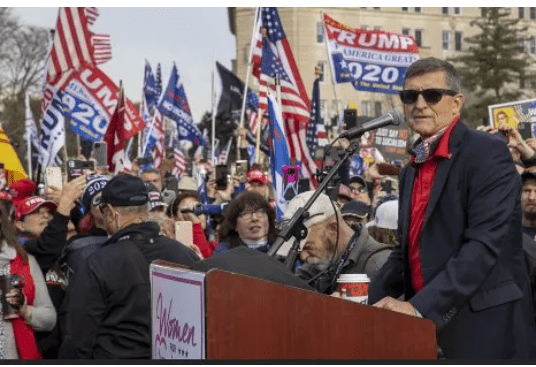 If you thought General Jack D. Ripper was the only crazy general we had to worry about and said to yourself, “Thank God he’s make believe,” think again. We have Mike Flynn out in the real world and he’s dreaming up a Dr. Strangelove-esque conspiracy theory of his own. He hasn’t mentioned precious bodily fluids yet, but he is very worried about global economic collapse and mind control. Maybe even fluoride in the water. Or aluminum in the tin foil. The general has also announced that “we’re at war.” Did you know that?

Michael Flynn is now promoting an ‘alternative facts’ movie about J6 called ‘Capitol Punishment,’ which they are charging $9.99 to stream. He claims J6 was “a foreign attack with domestic support” from antifa and FBI plants. Part of the trailer: pic.twitter.com/HEEPuIeK58

If that doesn’t get the QAnuts good and scared, there’s this.

Michael Flynn says that covid was intentionally released on the world by “Global Elites,” but “their little plan with covid didn’t work” because “digital warriors” exposed the truth. Now he says the “elites” are about to unleash another virus to control the population. pic.twitter.com/Mgl6zgOTEa

This is a former national security adviser talking. Now, granted, he didn’t last long in the position but he was that highly placed in the government at one time.

Flynn has the dubious achievement of having been fired by two presidents of two different political parties. The man is utterly corrupt. Nevertheless, he’s out there at the head of the right-wing movement, pumping out disinformation right and left.