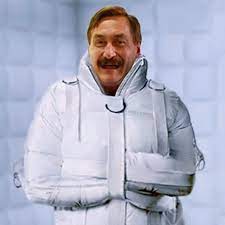 Another day, another Mike Lindell appearance on Steve Bannon’s War Room wherein he sings the same old tune. The lyrics go something like, “Worry not that all my efforts have come to naught so far, forget the past, this brand new idea of mine is going to get the job done.”

The larger issue here is the one that is worth looking at, and that is that apparently a certain portion of the population enjoys living in this alternate fantasy world created by right-wing media. We’ve commented here on that before and we will write many more pieces in the future, I’m sure, on exactly the same subject.

That’s the philosophical and sociological phenomenon that is worth noting, not the ravings of some housewares manufacturer in Minnesota. It’s the fact that there’s a market for this that says something significant.

Mike Lindell says he’s working on election decertification and if he can get 3 states to decertify it will go to the Republican-controlled states for 1 vote each. pic.twitter.com/JyViC7a9ia

We can only speculate that Lindell is referring to a scenario whereby if Trump created enough chaos with respect to the election that the House of Representatives would have allowed one elector each from 50 states to determine the presidency, but that notion was attenuated at the time and this far down the road, it’s on a par with science fiction and fantasy. This simply does not exist in the real world.

But, as stated, there are either people who 1) believe it does or 2) need to believe it does. And that’s the market that Lindell and Bannon pander to. And for the rest of us, it provides some measure of comic relief, although that is diminishing as time goes on. Right about now, those who are still monitoring this are doing so from a sense of seeing how pathetic it can get rather than anything else.

Judge Cannon Is A Disaster. But Trump STILL Can’t Even Defend...

For Trump Legally, It Goes Downhill Faster From Here On Out

Rudy Tells Bannon “Democrats Are Getting Ready to Cheat” – Which...