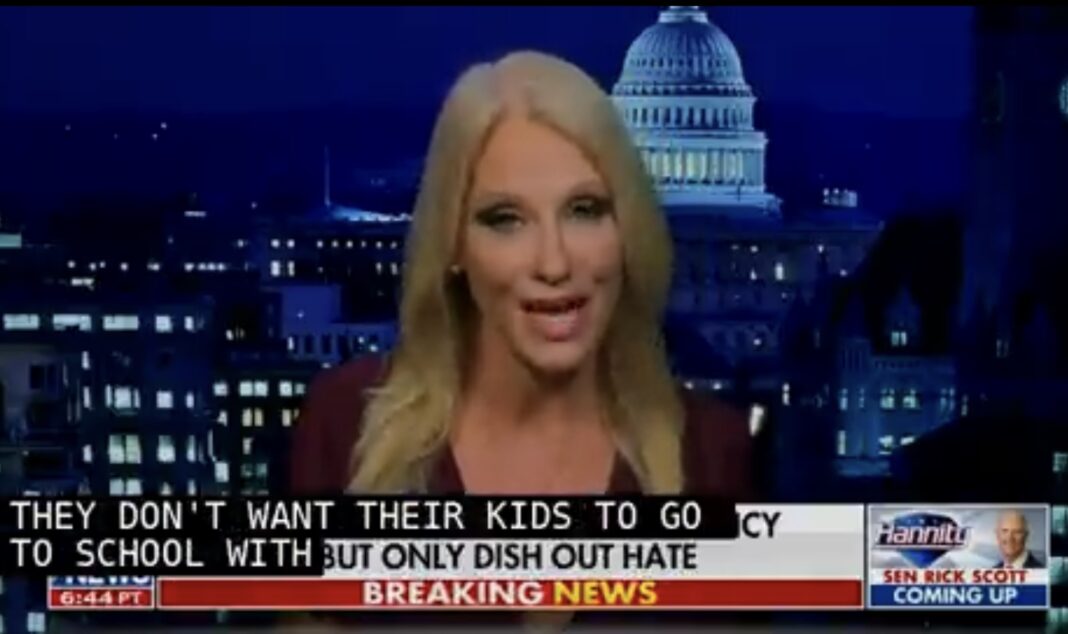 Well, yeah, KellyAnne Alternative Facts, if by that you mean we don’t want kids going to schools without great books, where LGTB kids aren’t welcome, but the teachers are packing heat, I suppose you are right.

Kellyanne has been compared in the past with Tokyo Rose and Hanoi Hannah and this is yet another outing that will go that direction because of its level of divisiveness.

All she’s doing is pouring gasoline on the culture war, nothing else.

She won’t go until the grift is over, Jo.

She’s selling MAGA Victimhood. Victimhood is central to how white and male supremacists, Christian nationalists rationalize their legal, political and physical violence against others. “Our race is being erased.” “Men are second class citizens.” “Christianity is under attack.”

You guys want to Ban The Diary of Ann Frank and The Grapes of Wrath, of course we don’t want our kids going to those schools.

Kellyanne, I hate to inform you that most Americans are like their fellow Americans. The difference is, your party has done everything it could to make divisions worse. There were white supremacists in your party and Republicans took years to censure them, hate crimes have risen.

Go on, Kellyanne. Nobody on the Left is arguing with you.
We will stop you when you’re wrong lol

trumpster got nothing but stoking hatredhttps://t.co/vHb78Z2u3b

Your daughter doesn't even want to live in your house, but your issue is that the rest of us don't like you?

"How dare they look down on us, the people who want to abolish education!!!"

We know them very well.https://t.co/YWg5oIoHG3

I mean yeah, if I had kids and they were going to school with parents who are at January 6, I'd be concerned.
This just feels like more priming of some cockamamie "civil war"scheme isn't it?

Just a reminder of the level of pure projection &hypocrisy here, these👇are the kinds of folks who make up the GOP/MAGA base. 🤷‍♂️ pic.twitter.com/U7sqEeiYur

Kellyanne doesn't want her kids to go to school with yours. As usual, her accusations against others are things she does. https://t.co/UGEbGWdBOY

Exactly, it always projection with these people.

Thanks, as always, to Acyn and his peeps!