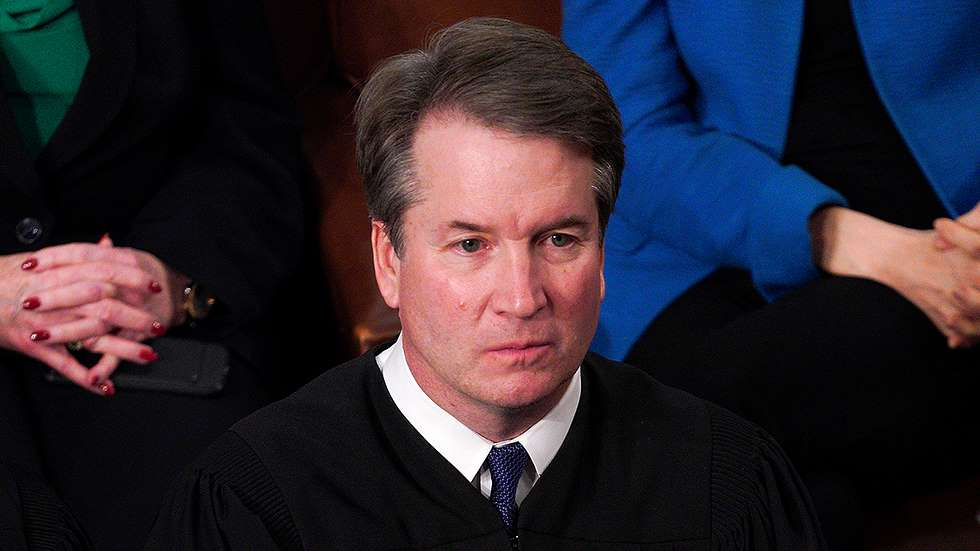 I didn’t think that the smoke alarm would go off just because I fired up the hibachi in the kitchen!

Actually, I have two examples of the Law of Unintended Consequences to share with you today. The first you likely already know. As our own dear Ursula Faw reported recently, Supreme Court Justice Kavanaugh had to abandon Morton’s Steakhouse with his family before dessert due to protesters screaming and yelling outside.

It was reported that Morton’s Steakhouse was furious with the disruption to their operations. I think that what Morton’s was really furious about was that if Kavanaugh keeps coming in there, they’ll start to lose customers who don’t want their $300 dinners interrupted by protesters.

Personally, I would like to apologize to Justice Kavanaugh from the bottom of my heart. I am truly, deeply sorry that the protesters didn’t chase your lame ass out before the soup and salads arrived! But don’t blame me! I warned you ass clowns two weeks ago that no matter how cloistered and entitled you felt, sooner or later, you’d bump into real Americans, and the outcome wouldn’t be pleasant.

Damn, that felt good. So much for the appetizer, here’s the main course. Earlier today Teri pointed out to me a Twitter link to an article that’s almost impossible to believe. But apparently it’s true.

A day or so, a Texas Highway patrol officer pulled over a woman for traveling in the HOV Lane. For those of you unfamiliar, it’s normally the far left lane of an expressway, marked with a solid white line, with a white diamond and the words HOV Lane every 500′ or so. Years ago, during the gas shortages, they used to be known as Carpool Lanes. They require at least 2 occupants to use them, even for passing purposes.

When the trooper got to the window, the woman politely asked him why he had pulled her over? He replied that she was traveling alone in a lane requiring at least 2 passengers, which was against the law. At which point she blew him away. Oh no officer, I’m 34 weeks pregnant. The Supreme Court overturned Roe v Wade, and Texas just passed a law that says that a fetus is the same as an actual person. You people can’t have it both ways. The cop complimented her on her originality, and handed her the ticket.

I’m going to deviate for a moment here, and put my judicial robe on. Hey, my column, my rules. On the one hand, I find the woman not guilty of violating the HOV Lane law. After all, the law is the law. On the other hand, I find her guilty of being a fucking moron! After all, the whole idea of the HOV Lane is to save multi passenger vehicles time, right? Depending on how far that woman was going, she could save about 5-20 minutes by using the HOY Lane. She blew at least half of that when the cop pulled her over. And now she’s going to have to spend anywhere from 2-5 hours sitting around in a courtroom waiting for her case to be called. If she loses, she gets a stiff fine, and points towards driving school. And if she wins, she gets off scot free.

Believe me, I know her. I was married to one of her for almost 20 years. They’re smarter than anybody else. If she gets off, she’ll go right back to using that goddamned HOV Lane, and she’ll keep right on using that HOV Lane, and she’ll likely keep piling up more and more moving violations, meaning more dead time in court. And maybe the next judge won’t be so sympathetic.

Here’s my larger point. Get ready for more and more of this insanity. GOP controlled legislatures are running around like a bunch of 5 year olds who found a bag of Snickers in the cabinet. They are running around, bouncing off of the walls, trying to outdo each other in passing the most restrictive abortion laws. Without consideration for the legality of them.

There are already various trigger laws, as well as newly passed laws that are mired down in state courts, for reasons ranging from violation of due process to personal freedom laws already enshrined in that particular state’s constitution.

This is what happens when state governments stop trying to write legitimate laws, and instead start writing ideological wet dreams. That simple fact alone means that these laws are going to remain front and center in the media all the way to election day, and keep the pro choice activists motivated. Don’t touch that dial.