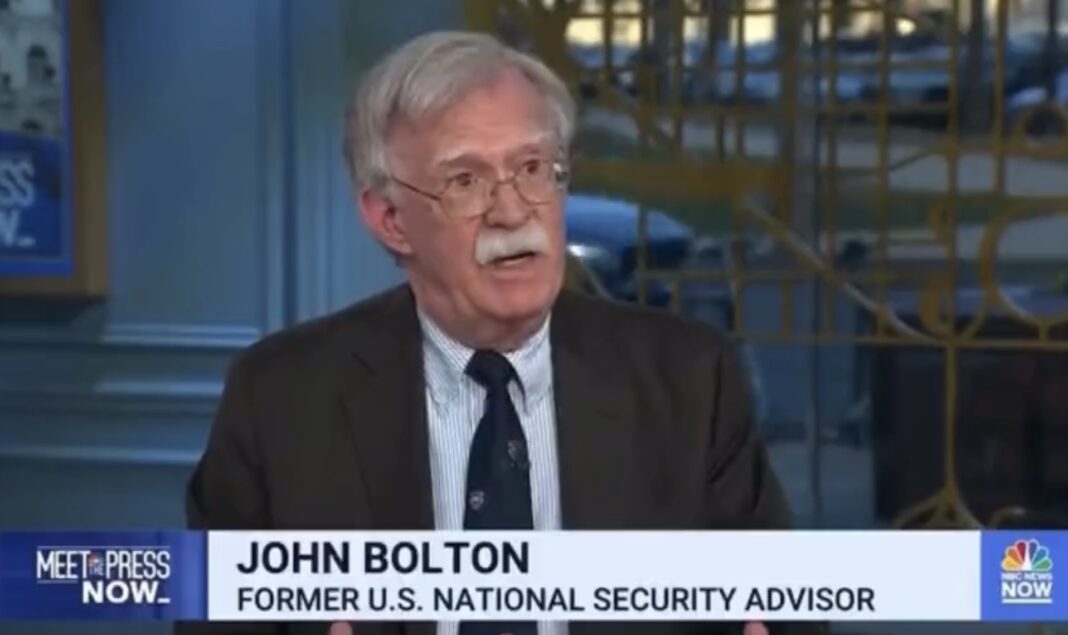 John Bolton is considering a run for the Presidency in 2024, ready to offer himself up to a political party and a nation that could each not be more disgusted at such a prospect than they would be if Kim Jong-un proposed to annex us as North East Korea…

“Donald Trump, if he were to take the oath of office again, God forbid, would either be lying about preserving, protecting and defending the Constitution, or maybe he wouldn’t say it at all,” Bolton said. “You can’t have this kind of approach. It’s not something one can disagree with. This is foundational to the republic.”

Bolton called on GOP leaders to denounce Trump, who is currently the only Republican to announce his candidacy for the 2024 presidential election. Numerous other Republicans, including Florida Gov. Ron DeSantis and Trump’s ex-Vice President Mike Pence, are expected to be gearing up to run for the GOP nomination…

… Bolton, noting that many Republican leadership roles are currently up for consideration, said that every prospective candidate should repudiate Trump’s remarks.

“And honestly, if they don’t, there’s one thing that would get me to get into the presidential race, which I looked at in prior elections, it would be to make it clear to the people of this country that Donald Trump is unacceptable as the Republican nominee,” Bolton said.

When pressed on those remarks, Bolton confirmed he would “absolutely” consider getting into the 2024 race. To be a presidential candidate, he said, one must not only declare support for the Constitution but also opposition to “people who would undercut it.”

While I agree with Bolton on the singular point that drumpf should be nowhere near the Oval, the prospect of his walrus like countenance being in charge of the U.S. war machine doesn’t exactly appeal either:

But my favorite Twitter follow Ron Filipowski manages to find some potential for amusement in even this scariest of prospects:

Especially if Chris Christie wants to wedge himself in there…

Yeah I think we need to raise the cringe factor from 10 (trump) to 15 (thanks to trump), they all think they have a shot now.

Too many to qualify as a 3 Stooges reunion.

Wait. Any one of them would make a better President!

Grampy Pee Paw's mustache ready to take on all comers.

What a freak show that would be.

Ron may be right, there might be some entertainment value in watching Pompeo and Bolton fight to the death in a cage match, but I shudder to imagine what the consequences would be if either the Neocon or the dominionists got control of the Military…

I think it best to wish Joe Biden continued health and a Jimmy Carter like lifespan.