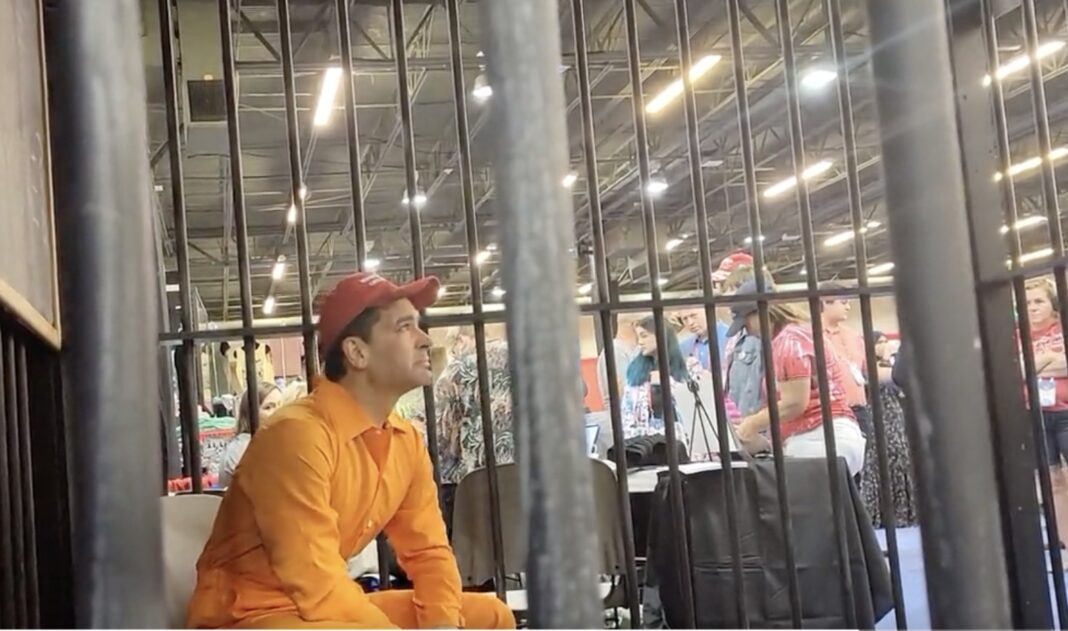 From the department of “You couldn’t make this shit up:”

He wept sitting on the bench

He wept sitting on the floor

He tallied days on a chalkboard set up for the purpise pic.twitter.com/dgGag1Qcjn

“Despite the January 6 hearings doing a number on the insurrectionist attack, and more damningly, on Donald Trump‘s chances of running for president again, a performance art piece at this weekend’s CPAC event in Texas is trying its best to play the martyr card. On Thursday night, freelance journalist Lauren Jedeed captured video of a man sitting inside a fake jail cell at the conservative event. While wearing a MAGA hat, the cell’s occupant didn’t once break character as he attempted to highlight the harrowing plight of the January 6 rioters who have been jailed for, well, rioting on January 6.

Seems very dramatic, right? Well, here’s the thing: According to Mediaite, the “performance artist” was later identified as Brandon Straka, who did participate in the January 6 attack on the U.S. Capitol building. However, Straka notably did not serve any jail time because he ratted out his fellow rioters to the Feds. Yup.

“In the memo, Dornan said Straka provided “significant information” to federal investigators over three interviews with the FBI following his arrest. In one interview on March 5, 2021, Straka, according to Dornan, provided information about “individuals who were inside of Nancy Pelosi’s office; individuals who were inciters at the Capitol; and organizers of the Stop the Steal movement.”

He also listed the names of individuals Straka spoke to the FBI about. Those names include rally organizers Amy and Kylie Kremer, Cindy Chafian and Ali Alexander — who Dornan described as the “preeminent leader of the Stop the Steal movement.”

What a bunch of gullible idiots. They were throwing money at the stoolie.

What’s he crying about? His poor decisions? The message is so muddled. If they are proud of J6 and feel persecuted, wouldn’t he be raging and pontificating rather than crying like a baby?

Self pity is better than sex foe MAGAts…

Oh yeah that's actually one of the convicted. The judge sentenced him to Life at CPAC.

He's probably working for scale so the tears are probably real. 😉

hahaha is there some reason he looks so much like paul ryan??

Do they have a theatrical recreation of burying Ivana at Bedminster?

I think I’ll pass on this show, if the put Roger Stone in a Dunking booth let me know…