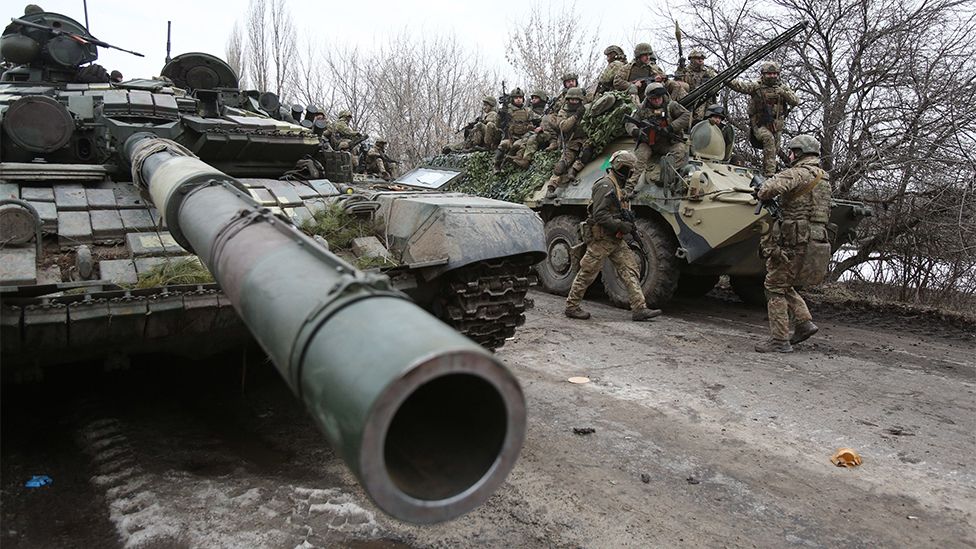 This is not going to end well. While the rest of the civilized countries in the world are busy dumping a forest fire water bucket full of shit over Putin’s head over his misguided war in Ukraine, Putin is busy doubling down. And the way he’s doing it proves that he’s every bit as sociopathic and delusional as the retarded orangutan he helped to elevate to the presidency in 2016.

Putin is trying to cover up the piss poor performance of his third rate military in Ukraine by proclaiming a series of largely symbolic orders that he can trot out to his population as symbols of his strong, unified leadership.

For starters, he’s ordering a series of plebiscites in areas currently controlled by Russia in Ukraine, rigging the vote to show that they are voting to join the Russian Federation. The logic is that this would give Putin a shoddy legal excuse to claim these territories as his own, and to use nuclear weapons if Ukraine tried to regain them. The problem is that no other country on earth other than Belarus would consider the results legally binding.

Next, Putin is proposing a series of laws that would make Desertion of their post by Russian troops in Ukraine a crime in Russia, punishable by 10-20 years of hard labor upon conviction. This is taking for granted that a bunch of post teen Russian conscripts, faced with death from automatic weapon fire or precision guided missiles, actually gee a shit about what Putin will do to them if they manage to survive.

But here’s where Putin jumped the shark. He signed a proclamation calling up an additional 300,000 Russian revervists to be equipped and sent to the front lines in Ukraine. The only way I can think of to describe it is that Putin is the Judas ewe who is leading the spring lambs to the slaughter.

Look, I get Putin’s twisted logic. I’m a war history freak, and I’ve studied both WWI and WWII in great detail, mainly because I played tactical war simulation games. And I know what Putin is thinking, but he’s thinking of a time long ago, and under far different circumstances.

In 1914, going into WWI, all sides had to factor into their planning something called the Russian Steamroller. Going into WWI, both Germany and France were capable of putting forward an army post mobilization or between 1.6-2.5 million men. The British had the capability of putting forward a post mobilization British Expeditionary Force of about 1.2 million men. Mobilization on both sides was considered to be 14 days after the initial orders went out. And both sides largely performed that way.

Russia was a different story. Due to the pure size of the country, problems with transportation and inadequate rail lines, Russian mobilization would take 30-45 days to complete. But once the Russians were gully mobilized, they were capable of putting into battle an army of 6.5 million men. Tactics didn’t matter, the Russians had an almost inexhaustible supply of replacements to simply keep pressing forward.

But that was 1914, and this is now. In 1914, you had single shot carbines with clips, bayonets attached to the rifles, horse cavalry for speed, and artillery of different ranges. war in 1914 was for the most part up close and personal. One of the horrors of trench warfare on both sides was reports of soldiers killed that couldn’t fall to the ground because they were propped up by the stacks of bodies before them.

But this is 2022. The Ukrainians, thanks to US and NATO support, have precision guided missiles, mass fire rocket launchers, long range artillery, and precision guided drones so complex that they can crash the drone through the windshield of a truck. Not to mention automatic weapons capable of loosing off a steady stream of death undreamed of in 1914.

And what is Vlad the Imp feeding into that meat grinder? Fucking reservists. You all know what a reservist is, don’t you? Just think of the National Guard reserves. They spend one weekend a month meeting, and spend 2 weeks a year in annual maneuvers. They are what we call here peacetime warriors. They are normally called up for local disasters in their states to assist in the rescues and recovery, not to go to war.

And what Putin is calling up is 300,000 reservists to take up arms and head to the front. Putin put more than 150,000 of his alleged top line troops into Ukraine. And as a result the Ukrainians have more guns, ammunition, tanks, jeeps and transport vehicles than they had when the war started. Why? Because chickenshit Russian troops abandoned them when they fled in terror. How the hell do you expect Russian reservists to magically come in and turn the tide?

Putin is playing his last, desperate ace-in-the-hole card. He is gambling on the incredible mass of the Russian Steamroller to turn the tide. But modern warfare has turned raw numbers into nothing more than clay pigeons in a shooting gallery. Especially when you consider that they’re using inferior equipment, and the Ukrainians are using the Russian’s own equipment against them. This is Putin’s last Reichstag bunker stand. Russia is already beaten, the only question is how many more Russians must die to satisfy Putin.