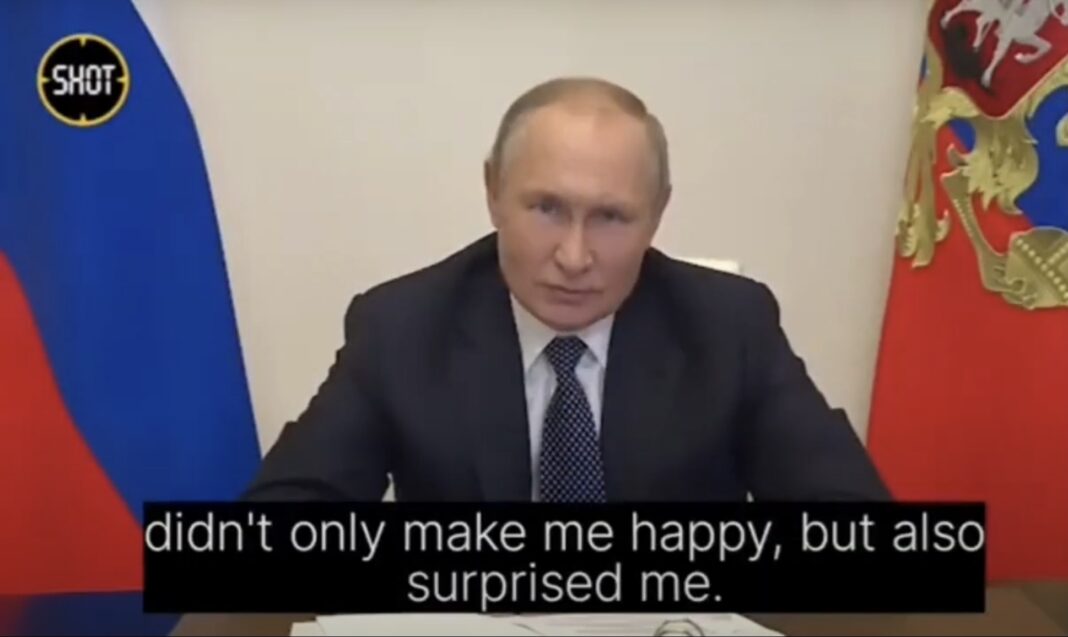 I’ll admit it, when I first heard the news a couple of days ago, I literally laughed. It was announced that Russian shitheels Vladimir Putin had signed an emergency declaration proclaiming martial law for the 4 portions of Ukraine in the east they had illegally annexed a couple of weeks ago.

I had good reason to laugh. I’m no military savant, but I know enough to realize that if you’re going to declare martial law, you have to have the military personnel on the ground to administer it! And one of Putin’s problems is that the Russian army is getting pushed back all along the eastern border in the regions he tried to gobble up.

The Putin propaganda is coming rich and thick. For starters, Putin announced the other day that he had reached the 300,000 plateau for new conscripts he had called up a few weeks ago. I call bullshit, for 2 reasons. First of all, the only 200,000 number Putin has achieved is the number of able bodied men who have streamed across every border they can find to get away from Putin’s call up. There are reports that Russian military are literally kidnapping men from restaurants and bars, shoving them on buses, and taking them to basic training.

Here’s the 2nd reason. It’s simple logistical fact that Putin doesn’t have the necessary training facilities available to him to properly train, or even improperly train some 300,000 soldiers for combat duty in less than a month. And there was a report last week that 2 conscripts from former Russian federation countries turned around and opened fire on their comrades in basic training, killing 11 and wounding 15. My guess is he has at best 100,000 conscripts, and they’re nothing more than cannon fodder for the Ukrainians.

Here’s the kicker. Since Russia invaded Ukraine, the Ukrainians in the contested regions have already been living in a hot combat zone for 7 months now. After the invasion, they were in an occupied area, under the control of Russia. Since the Ukraine offensive, many of them have lived in limbo, under Russian control one day, only to be liberated by Ukrainian forces the next day, only to switch again the next day. What difference does martial law make when people live on the front lines?

Well, two things, and they make Putin a 2 time loser. Numero uno on this list is that the martial law order Vlad the Imp signed allows him to conscript local residents into militias to fight for the Motherland. Is he fucking kidding? Organize Ukrainian citizens into militias to fight against their own country? I don’t need to work for the Psychic Friends Hotline to see how this one goes. The able bodied men will either flee into the forests and become partisan snipers, or they’ll flee to the SW, and join up with the Ukrainian army.

But here’s where Putin did his Fonzi jumps the shark redux. The martial law decree allows Russia to forcibly relocate Ukrainians behind enemy lines. And there is already news video footage of Russian soldiers forcing Ukrainians onto buses to take them behind the fighting lines, possibly with an eye towards repatriating them into Russia.

The. Dumb. Stupid. Shit. Ukraine has been kicking Russia’s ass all over the eastern regions that Russia took in their opening offensive. But if there was one thing that would give the Ukrainian military pause in their liberation offensive, it would be fear that too much artillery or rocket attacks could kill innocent Ukrainian civilians. But if Putin is going to move non combatants back from the front lines, then there’s no longer any reason to hold anything back from their offensive.

Look, let’s face it. Putin’s aggression aggression into Ukraine showed that Russia is no Super Power. They’re a 2nd rate military with 3rd rate equipment, and a 4th rate general staff. But as a warning to the GOP, just like Traitor Tot, Putin wants to maintain control over something he knows absolutely nothing about. And those career generals are there for a reason. Here endeth the lesson.