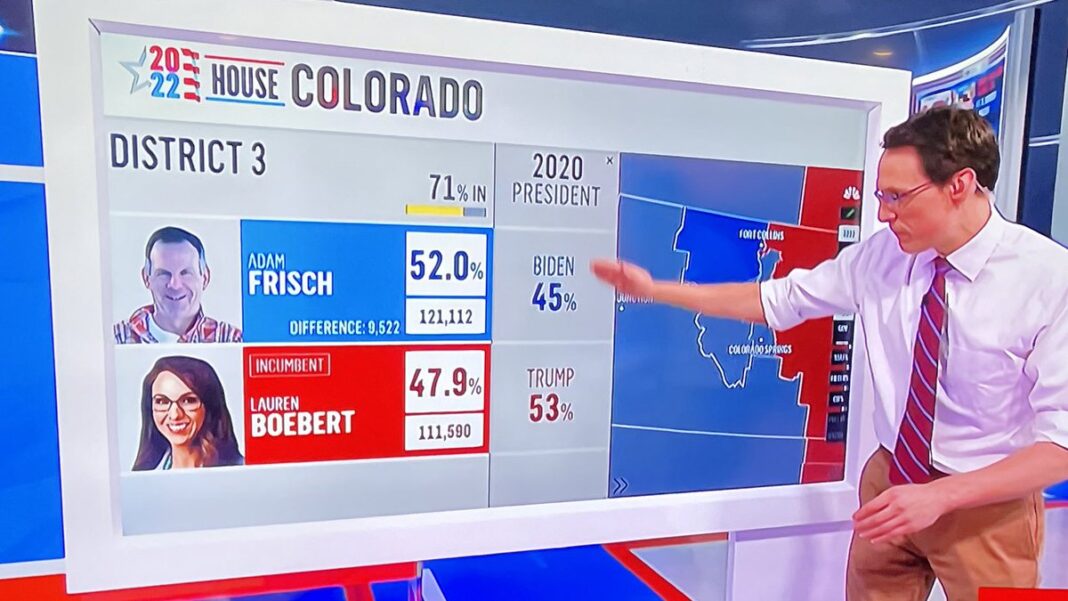 So far it has been a bittersweet night, the complete collapse of the Democratic Party in Florida and Beto’s loss in Texas are painful to be sure, but not entirely unexpected, on the other Democrats are holding their own in the contests to control both the Senate and The House at this hour and there is news from Western Colorado that is sure to make your blue heart skip a beat…

“The race between incumbent U.S. Rep. Lauren Boebert and her challenger Adam Frisch for Colorado’s massive third Congressional District is too close to call as election officials continue to count ballots.

And, as you can see from my top pic Frisch’s lead has only grown.

“Frisch garnered major national attention and even surpassed the deep-pocketed Boebert’s fundraising efforts in recent weeks. His strategy lay in his measured approach, regularly calling out the congresswoman’s divisive statements and noting whenever she was traveling the country rather than meeting with constituents in Colorado.

The former Aspen City Council member regularly called Boebert a member of the “anger-tainment” industry and criticized her for not passing any legislation in her first term. One of his most-repeated lines during town halls and debates stemmed from Boebert’s fixation on Speaker of the House Nancy Pelosi: “I’m Adam Frisch, not Nancy Pelosi,” he’d say.“

At this hour Fetterman in Pennsylvania, Kelly in Arizona and Mandela Barnes in Wisconsin are all running strong races and while the Republicans have flipped 5 House seats the Dems have snatched a few away from the GOP as well, including Boebert’s.