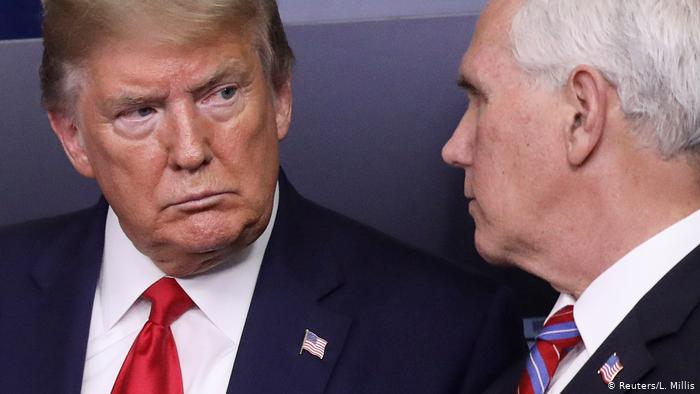 Oh God, how long will this insufferable buffoon be among us? How many more months, days, minutes? And of course it’s not just him, it’s the Trojan horse of malefactors that he brought with him into government and which have taken hold in our politics and public sphere like cancerous barnacles.

Donald Trump issued one of his statements again today. And, as usual, he revealed more than he should have. 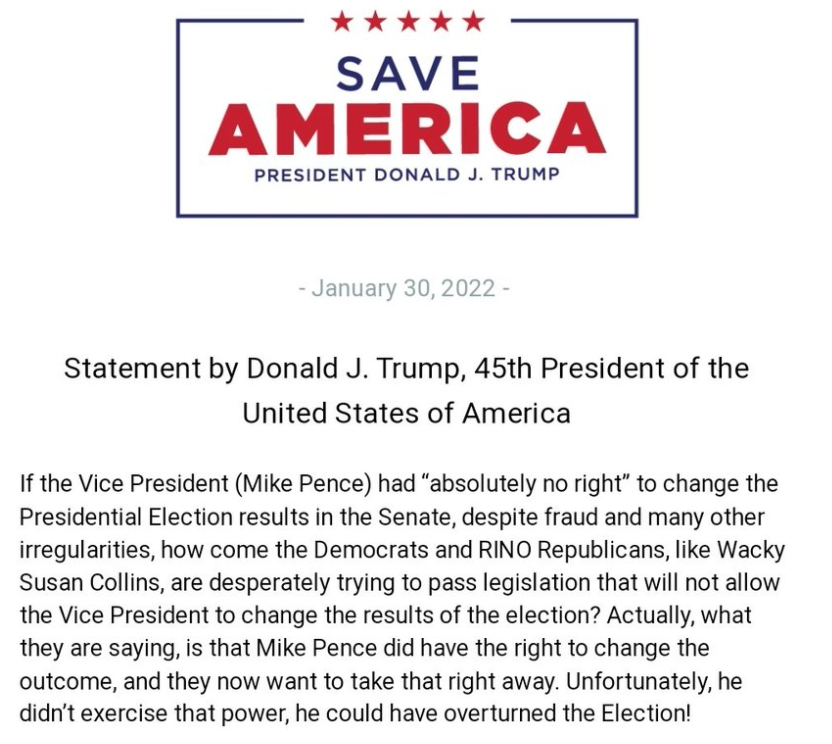 After people stopped gasping and laughing, they began tweeting. Here is George Conway’s take and it is priceless.

The answer is: The Twelfth Amendment and the Electoral Count Act of 1887 already make it entirely clear that the Vice President merely opens the envelopes. But sometimes we want to make laws even clearer so that even semiliterate psychopaths have a chance at understanding them. https://t.co/MZojqccN5G

He’s hanging Mike Pence out to dry again. That should make their dual appearances at the Republican National Committee conference in March in New Orleans especially droll.

This is all Mike Pence’s fault, in Trump’s mind. If Pence had only broken federal laws and rather than acting as the Master of Ceremonies during the certification, had instead committed treason by substituting the fake electors as real and gaveled in Trump as the winner of the election, then all would be hunky dory in Trump’s mind.

We will never know what would have happened if Pence had lost his marbles, not to mention smashed his moral compass beyond the condition it was already in after five years of association with Donald Trump. We can only speculate.

One possibility is that General Milley or somebody else in the chain of command would have overridden Pence and stopped the proceedings. We do know, only, that a constitutional crisis of unprecedented magnitude would have occurred. Pence saw the insane position he was being put in and refused to go along with it, and for that sin his penance is to be the MAGA Benedict Arnold, booed and reviled wherever he goes.

And it was a good idea for Pence to fear going along with Trump’s insanity. I have gamed out the possible scenarios of Pence playing the evil part that was improvised for him and I have envisioned possible assassinations or assassination attempts, Trump holing up in the White House declaring himself the winner and attempting to declare martial law and the military refusing to carry out an illegal order, Nancy Pelosi taking over as President. Who knows? We will never know and thank God that’s the case. Bear in mind, this was so nuts that even Kevin McCarthy was begging Trump to stop and blaming him for the insurrection later, before he decided to roll over and play dumb. Even Lindsey Graham jumped ship before later coming back into the fold.

But I’m sure it had to cross Pence’s mind that if he crossed the bridge into total illegality that he was opening himself up for God knows what reprisal. Paradoxically, Pence’s weakness on this occasion turned out to be his strength. He was afraid, and rightfully so, to go out on terra incognito and risk the consequences.

And maybe there would have been none. Maybe Trump’s coup d’etat would have been successful. Again, this is all speculative at this point, and we will never know. Maybe the Russians would have taken over just as Khrushchev predicted in the 50’s, without firing a shot. Certainly that was Vladimir Putin’s wish. And we could be living under a dictatorship right now, a colony of Russia.

How the mind reels.

In any event, Trump isn’t finished. He actively called for troops in Texas Saturday night and promised to protect them. This is where we are in 2022. But at least George Conway made it clear what is going on — not that it sunk in.