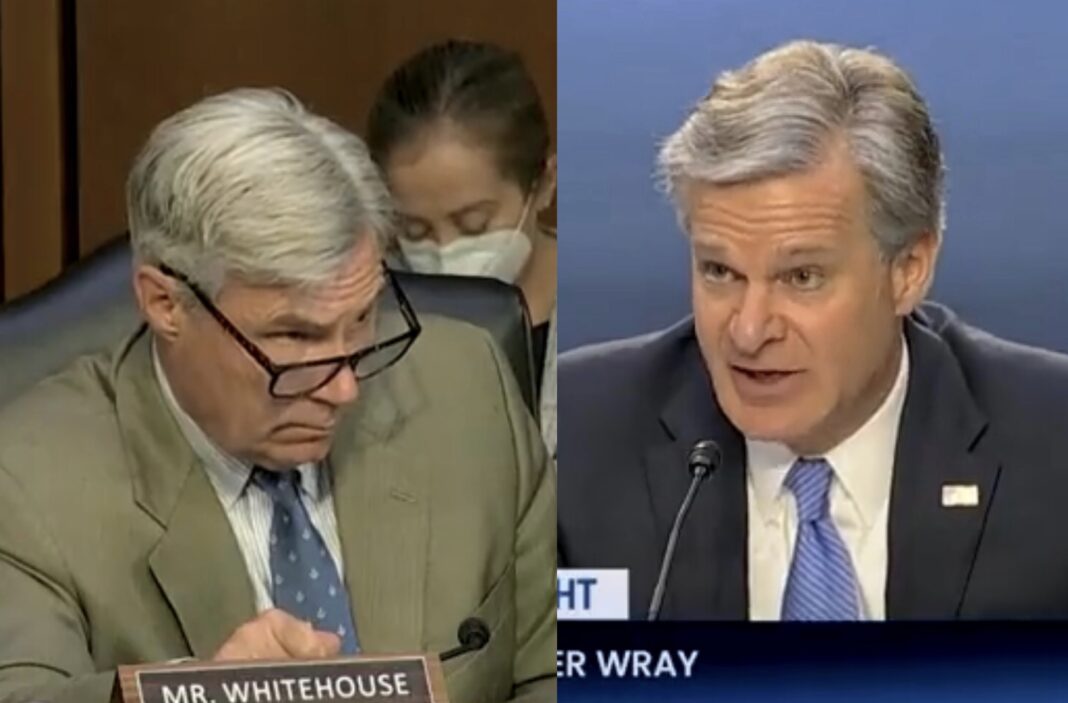 During The Confirmation Hearings for Bret Kavanaugh in 2018, some 4,500 tips were sent to the FBI from people who claimed to have knowledge of his past inappropriate conduct with women. The FBI did not investigate these but instead forwarded them to The Whitehouse for vetting where, surprise… surprise… none were deemed worthy of further scrutiny.

“On Thursday, during a Senate Judiciary Committee hearing, FBI Director Christopher Wray admitted to Senator Sheldon Whitehouse (D-R.I.) that the bureau’s 2018 investigation into sexual assault allegations against then-Supreme Court nominee Brett Kavanaugh was a sham. The FBI had sent all relevant tips (the FBI’s assistant director, Jill Tyson, said there were about 4,500) to Donald Trump’s White House. From there, Trump’s team then decided whom the FBI could interview as part of its sexual misconduct investigation into Kavanaugh before he was confirmed.”

Sen. Whitehouse grills Director Wray's about how the FBI handled its sham investigation into Brett Kavanaugh during his confirmation process pic.twitter.com/IrfFrbYQEO

And text of the crucial testimony:

“WHITEHOUSE: As you know, we are entering the fourth year of a frustrating saga […] regarding the Kavanaugh supplemental background investigation, and I’d like to get that matter wrapped up. First, is it true that after Kavanaugh-related tips were separated from other tips, that they were forwarded to White House counsel without investigation?

WRAY: … When it comes to the tip line, we wanted to make sure the White House had all the information we had, so when the hundreds of calls started coming it, we gathered those up, reviewed them and provided them to the White House—

WRAY: We reviewed them and then provided them to the White House.

WHITEHOUSE: You reviewed them for the purposes of separating from tip line traffic but did not further investigate the ones that related to Kavanaugh, correct?

WHITEHOUSE: Is it also true that in that supplemental BI [background investigation], the FBI took direction from the White House as to whom the FBI would question and even what questions the FBI could ask?

To Wray’s last point, I’m not sure if who decides “what questions” is really relevant if no one is questioned but whatevs…

So if a requesting entity is sent incriminating information collected by the FBI, the norm is the FBI won’t investigate any of it? How dangerous is this in the malevolent hands of someone as corrupt as Trump?

If an investigation shows real problems (I believe there are), Kavanaugh can be impeached & convicted if there are enough votes

However, that’s a really high bar and I doubt we’d get there.

Angry doesn’t begin to describe how I feel

That’s about the size of it, Kentucky…

I’m not sure if any of this surprises anyone, I think most of us suspected as much at the time.

But it is good, I suppose, that this shit has been dragged out into the sunlight.

Can we do anything about it?