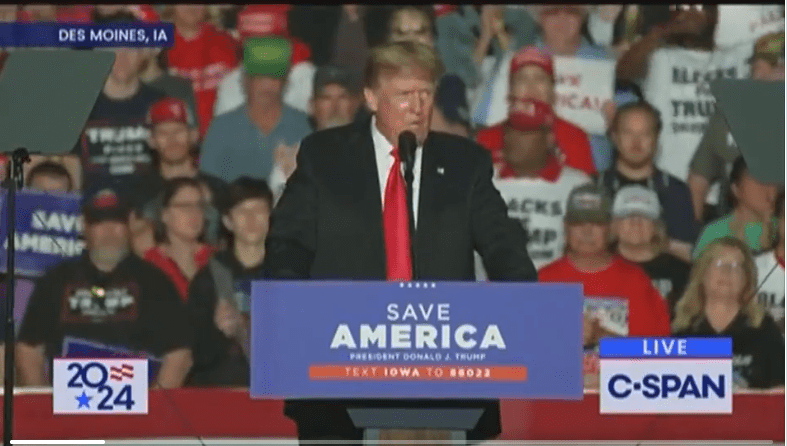 I just keep coming back to this. His Lowness’ Saturday night rally in Phoenix. Not Trump, that was the same tired shit. In fact it was all the same tired shit. But I keep coming back to the fact that every single man-hackin one of the Trump wanna be’s who spoke at the rally opened with the exact same, identical words, Trump won in 2020! Which got the requisite roar from the crowd. But if you watched, the undercurrent in the crowd was, No shit, we know he won. So why isn’t he back in the White House already? For which they had no answer.

Look, American Pie was great the first 2,374 times you heard it. After that it kind of started to flag a little bit. The same thing for Born in the USA after the 3,109th airing. Sure, people will still plunk down $30 to see Ted Nugent at the Ho-Chunk casino. He may not be what he once was, but hell, Cat Scratch Fever is still a rocking tune.

And that’s the kind of vibe I’m starting to get from the GOP. Sure, Trump is still their sugar high, and besides, he’s free, if you don’t mind waiting in line for hours, like at the county fair. But he’s still rotating free association through the same lame shit he’s been spouting since the 2015 primaries. It’s kind of like if Air Supply went back out on tour again. You could sing along with every song because you already knew every word.

And for quite a while now, I have been getting vibes from GOP lawmakers and strategists that are still able to tie their own shoes, that this is not a viable course of action. Since Inauguration day, these GOP realists have been literally begging Trump to finally veer away from the Stop the Steal past, and start hammering the Democrats and Biden on their failures in the first two years to motivate them going into 2022. Because the Stop the Steal rant is a closed end loop, with nowhere to go, and nothing new to add.

As with the denizens of Brigadoon, these sane GOP members want to start throwing cold water all over the populace to wake them up and motivate them for their one day of activity in the sun. But since abandoning The Big Steal would make Traitor Tot a loser, they’re stuck in a dead end loop.

And the problem is that it isn’t motivational. Trump supporters have soet 14 months, and a violent coup attempt being told Trump got jobbed. Like my music analogies above, they can sing this one chapter and verse. The problem is how do you motivate them with it? It tends to lead instead to a mood of grievance, especially Trump has told them that their votes don’t count anymore. So, why come out and vote?

The easiest way is to trumpet from the heavens the legislative steps you’ve taken to ensure voter integrity in upcoming elections. That should give people motivation! Except they can’t. First, they can’t actually point to any document voter fraud in 2020 other than dead Republicans voting for Trump. And if they want to trumpet their new voter integrity laws, they have to explain that it’s nothing more than thinly veiled racist claptrap to keep black and brown people from voting. But is that motivational? Aren’t people just as likely to think that since the great unwashed can’t vote anymore, they don’t need to bother either?

I think this is going to be a real problem for the GOP in 2022, possibly leading to an enthusiasm deficit. If Manchin and Sinema block voting rights, the Democrats will hold them up as turncoat traitors, and motivate more minorities to show up to vote to make them inconsequential. Trump has already told the GOP base to stay home. With their current messaging, how does the the GOP motivate their base to come out and vote? Don’t ask me, I have no idea.