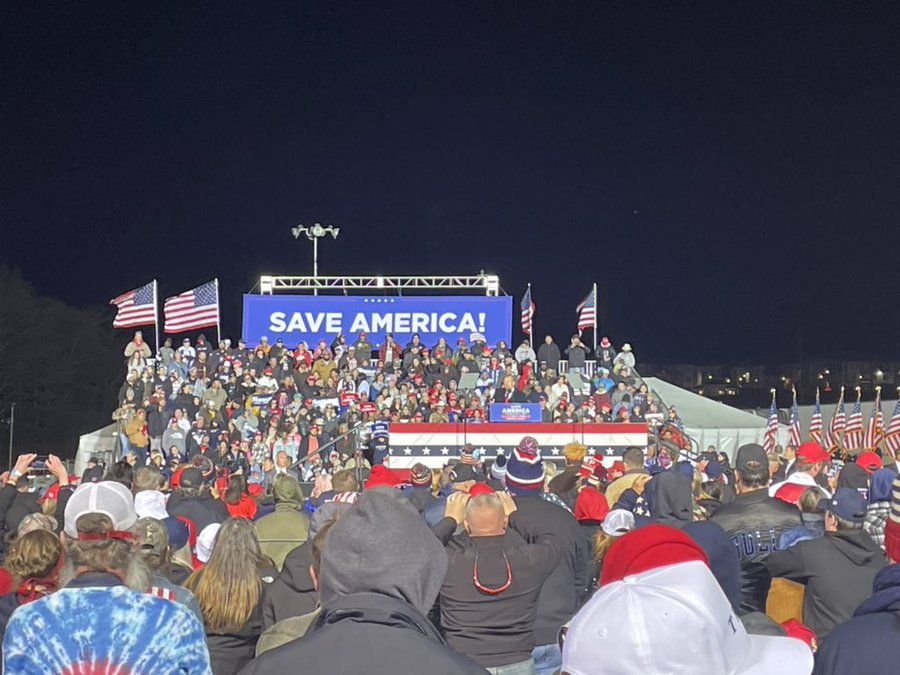 The cult has convened in Georgia. A reporter at the Atlanta Constitution-Journal says, “I’ve covered more than two dozen Trump rallies around the nation. This is the smallest crowd I’ve seen at a rally of his in Georgia since he won the 2016 election — significantly smaller than the crowd in Perry in September.”

Here are a few of the low lights.

First we hear from Trump the expert on climate change.

Trump mocks climate change, “the ocean will rise one, one-hundredth of one percent, over the next 300 f*cking years.” pic.twitter.com/fMN0hx1L8s

Here’s the story of the Dreamsickle Deity’s prowess on the golf course.

The Director of Communications for Trump’s ‘Save America’ PAC want to let people know tonight that Trump made a hole-in-one on the golf course before heading out to his speech tonight. pic.twitter.com/I7eoz68ntu

I can tell you statistically that the odds of making a hole in one are 12,500 to 1. For professional golfers like Tiger Woods, other world class golfers, the odds drop to 2,500 to 1. Maybe Trumpty did it. Maybe piggies with unicorn horns wearing pearl necklaces flew around the golf course cheering him on while he did it. I wasn’t there. Or, maybe a caddie who wanted to get a raise dropped the ball in the cup rather than chase the real one in the mud?

There’s a group of QAnon folks at the rally wearing JFK, Jr. shirts because they think he is alive and will become Trump’s VP. #TrumpRally pic.twitter.com/7ElXwuUkvh

Don’t want to forget about the Q folks, now do we?

Here’s Trump doing his interpretation of a dancing bear. Or something.

All those years hanging out at Studio 54 and this is all he’s got. pic.twitter.com/tuVnXWjuXl

And you knew this was coming.

Trump: Joe Biden should recuse from anything having to do with Ukraine because they’ve gotten so much money from Ukraine pic.twitter.com/v2kIW0LP7I

Trump: No President has ever suffered like I’ve suffered at the hands of these animals pic.twitter.com/GMMi6M8gxf

Trump: They all said Donald Trump didn’t like NATO. Look I’m not particularly thrilled with it. I think when you need it, it won’t be there or maybe it will but we can get together pretty fast… pic.twitter.com/ZaUX07eFrx

Trump complains that his lawsuit was assigned to a judge appointed by “Bill and Hillary Clinton” and says “This shit could only happen to me” pic.twitter.com/pP9Kdw7PKP

This note is as good as any to end on. Trump is a victim. Life is unfair to him. He gets so much less than he deserves. This is what he preaches and the crowd identifies. They, too, are victims in a cold, cruel world.

If he says anything beyond this, I’ll put it in a subsequent piece. But this is how it is, in the Georgia moonlight, with a crowd that is not that big, nor that enthusiastic.

This crowd is hardly applauding. Not the same sort of enthusiasm I’ve seen at other Trump rallies.

“If Kemp wins I think Herschel Walker will be very seriously and negatively impacted,” says Trump of the GOP nomination, a clip Democrats are sure to save. #gapol #gasen pic.twitter.com/Kx9dQsOe0a

Maybe this is how MAGA nation ends, not with a bang but with a whimper. Maybe it just folds like an old lawn chair and gets put in the back of the garage, to gather dust. Maybe it’s time for them to grow up. We shall wait and see. But one thing seems certain: the rabid anti-Kemp, anti-establishment GOP furor that he hoped to get rolling in Georgia tonight does not seem to be happening at all.