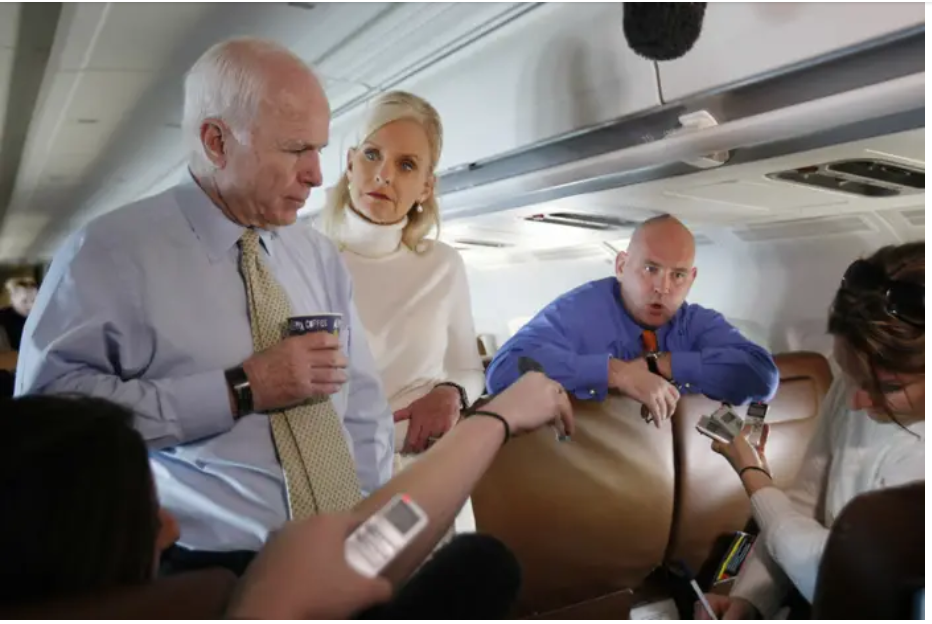 Thank you Meghan McCain for your “abhorrent and abusive behavior” which finally catalyzed this reaction from Steve Schmidt. I say that without a trace of irony, I mean it. Schmidt has been taking the fall for his loyalty to John McCain for 14 years now. He’s decided enough is enough. He launched a Substack newsletter, The Warning, three hours ago. I of course subscribed at once and urge you to do so as well.

If you read my post here earlier today, you know that Schmidt has been reacting on Twitter for a couple of days now to Meghan McCain’s calling him a pedophile. Meggan Mac, as she was dubbed back in the day, is no stranger to unwarranted slurs or to abuse of those whom she regards as her subordinates, which is everybody.

Read it straight from Steve Schmidt in his article, No Books, No Money, Just the Truth

Over time, that lie has become heavier as I have been abused by the family of the man I worked for as a volunteer.  The burden of carrying this lie – while being attacked for 14 consecutive years by the bully Megan McCain – has finally reached its end for me.

This lie is Senator John McCain’s lie. It is his family’s burden to carry, not mine.

Let us start at the beginning: Senator John McCain turned a blind eye to the dealings of his top adviser, Rick Davis, who was making millions of dollars with his partner, Paul Manafort. Manafort was advancing the interests of the Russian Federation in Ukraine and across Eastern Europe. They worked for the Putin puppet Victor Yanukovych and Russian oligarch Oleg Deripaska. They advanced Russian interests from the Maidan to Montenegro. John McCain spent his 70th birthday with Oleg Deripaska and Rick Davis on a Russian yacht at anchor in Montenegro.

Why would Senator McCain tolerate such behavior?

Immediately following the story’s publication, John and Cindy McCain both lied to the American people at a news conference that I prepared them for on that same day.

Both denied the story to me personally, as did the lobbyist at the center of the story. They also lied to the American people.

Hit the link above to the C-Span tape and walk down memory lane. I enjoyed the movie Game Change but would have enjoyed seeing this movie one hell of a lot more.

Senator McCain denied his long relationship with the lobbyist – to whom he was credibly accused of providing special favors – dozens of times to my face. After the New York Times story – which accurately detailed that relationship – was attacked and successfully discredited by the campaign under my direction, John McCain told me the truth backstage at an event in Ohio. Understandably, he was very concerned about this potentially campaign-ending issue. He kept saying, “The campaign is over.” I reassured him that it was behind us.

However, John McCain was convinced it would soon be over. Similar accusations and relationships had ended campaigns in the recent past. In fact, John McCain looked at me and said he did not understand how he could go on with his presidential run by saying, “Boy, I had a long relationship with her.” I was livid, and flew home to California. After he obsessively called for days afterwards, I (foolishly) returned to the campaign trail.

For the next several months, there was not a single night that passed that I did not spend hours on the phone with a broken, distraught and profoundly unstable lobbyist. She screamed at me incoherently for hours every night. I became the shock absorber for her rage, anger and humiliation. I did this to protect John McCain and the campaign.

During my final call with the lobbyist, as she heard my young kids crying in the background, she told me that she wished that they could die so that I could share the depths of pain she felt when John McCain called her a “good friend” during his news conference denying the relationship. Twenty minutes later, John McCain called me panicked – he insisted that I apologize to her, or else his campaign would be over. I told John to “fuck himself,” and yet again, against my better judgment, I returned to the campaign trail.

By early July 2008, the campaign was in deep trouble. At that time, I was put in charge of everything except the VP search and vetting process, as well as the looming convention. Rick Davis retained authority of those areas.

That same month, in a condo in Aspen, Colorado, I spoke to Cindy McCain privately about the abhorrent and abusive behavior of her daughter, Meghan. She grew teary-eyed, and said, “I raised two good sons.” Both John and Cindy McCain were mortified by her behavior.

After Senator McCain was unable to choose Joe Lieberman under a one-term pledge that I had proposed – due to Lindsey Graham’s lack of restraint and discipline to maintain confidentiality – the campaign was left with two choices: Mitt Romney and Tim Pawlenty. Unfortunately, neither would change the fundamental dynamics of an election that we were losing. That was the context under which I made the call to Rick Davis, suggesting that we consider Sarah Palin. I said that I didn’t know much about her, except that she was the most popular Governor in America – but that we must fully and completely vet her.

Proximate to that time, the lobbyist had called John McCain’s Senate Chief of Staff to say that she’d called him from the front seat of her parked and running automobile in her closed garage. She wanted to pass along the message that she wanted to say goodbye to John McCain, and that she loved him. The Chief of Staff asked me if he had done the right thing by calling 911. I assured him that he had.

Dear God. Read between the lines on that one. The Chief of Staff would have let the woman die — or at least that is my interpretation, call me a cynic.

Now he gets to what a psycho Palin was and how he’s taken the blame for that for 14 years, when the blame rested squarely with McCain. And that part is inarguable. The ultimate call was McCain’s regardless of how Palin came into the picture, or at whose suggestion. The buck stops with the presidential candidate.

For 14 years, I have been accused of being disloyal for speaking out against Sarah Palin by the people who both failed to vet her and who know what had transpired with the lobbyist. I was consumed with trying to figure out what to say and do when the consequences of John McCain’s lying inevitably exploded into public view. Despite these, and so many other attacks on me personally, I remained silent.

While I was dealing with preparing for what we viewed as the certainty of public exposure of this matter, and the unraveling of Senator McCain’s refusal to confront and speak the truth, Rick Davis was vetting and interviewing Sarah Palin.

As has been previously reported, John McCain met with Sarah Palin alone for two hours before Cindy, Mark Salter and I joined him by a stream on their Sedona, AZ, property. Cindy pointed out that picking Sarah Palin would be a big gamble. Mark Salter told Senator McCain that there were “worse things than losing an election; you could lose your reputation.” I told him that it was a big risk, but that in my view, unless we took a risk with her, we would certainly lose the election.  John McCain looked at Cindy, said that he wished she hadn’t described it that way, closed his fist and pretended to shake imaginary dice, before saying, “Fuck it. Let’s do it.”

Earlier that day, Senator McCain had asked me to accompany him to the private meeting with Sarah Palin where he would interview her to be the Vice Presidential nominee.  I said that would be inappropriate.  I told him that this was his first presidential decision.  I told him that he alone had to make an assessment as to whether she was ready to take the Oath of Office on Day 1, and whether she was prepared to be President. He, and he alone, had to make that decision.

This was the biggest mistake I have ever made. The first opportunity I had to discuss a substantive policy issue with her did not take place until we were leaving the Minneapolis convention.  It took less than three minutes for me to absorb the magnitude of the disaster.  Should this have happened earlier, the selection of her would never have happened. This was a lapse in John’s judgment, not mine.  My mistake was leaving John McCain alone in a room with her.

When the campaign ended, Sarah Palin lashed out at Nicolle Wallace and me.  She and her staff smeared us as disloyal leakers, who had sabotaged her political genius.  As the stories of Sarah Palin’s grift and egregious behavior exploded into public view, I asked John McCain to call her and tell her to stop attacking us and blaming us for her failures.  He wouldn’t. Why? Because he said that if he did, she would attack him.

The bravest man that I had ever met turned out to be terrified of the creature that he had created. His refusal to be honest about his mistake of picking her – and his unwillingness to confront the furies she unleashed – allowed an ember to grow into a conflagration that is foundational to our current catastrophic denial of reality and profound dishonesty of the far right.