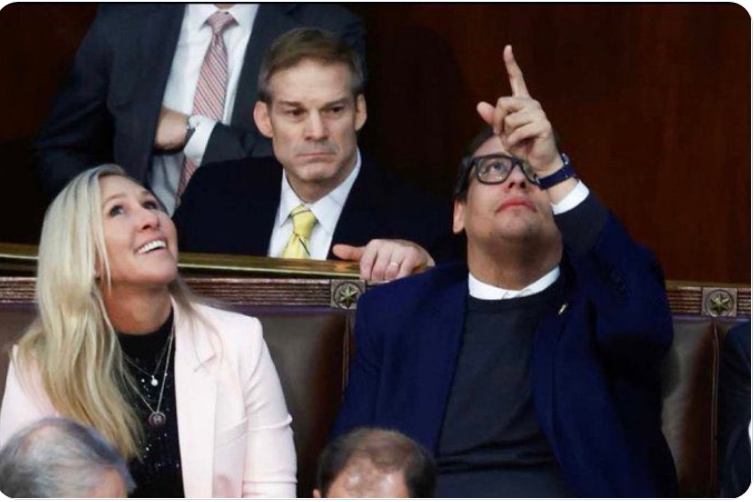 George Santos is the perfect poster child for the Republican party, circa 2023. He is as corrupt as they come, incredibly underqualified for the job he now holds, and committing ongoing transgressions on a daily basis. He is the very embodiment of corruption and untruth. Yet, he’s bulletproof, because Kevin McCarthy needs his vote.

Today’s fracas involves Santos’ treasurer, who really isn’t Santos’ treasurer. The man told Santos he didn’t want the job. But somehow that small fact got lost in the shuffle and Thomas Datwyler’s name got electronically signed. That is, as ABC News reports, a “very big no no.”

With a disclosure filing deadline approaching as questions swirl around his use of campaign funds, embattled Rep. George Santos’ campaign appears to be left without a treasurer.

On Wednesday, several fundraising committees associated with the freshman congressman from New York filed amendments to their statements of organizations, notifying the Federal Election Commission of a new treasurer.

But the newly listed treasurer, Thomas Datwyler, a veteran campaign finance treasurer who has served on multiple other political organizations, says he does not work for the Santos campaign and that the filings were signed under his name without his consent.

“On Monday, we informed the Santos campaign that Mr. Datwyler would not be serving as treasurer,” Datwyler’s attorney Derek Ross told ABC News. “It appears that there’s been a disconnect between that conversation and the filings today, which we did not authorize.”

Pro tip, George: When the financial people start jumping ship, that’s when the end is nigh. Go ask Donald Trump. He’ll tell you all about it. Kevin can’t protect you forever. You’re wayyy in over your head and as soon as you become too much of a liability, Kevin will be the one to throw the anchor at you.