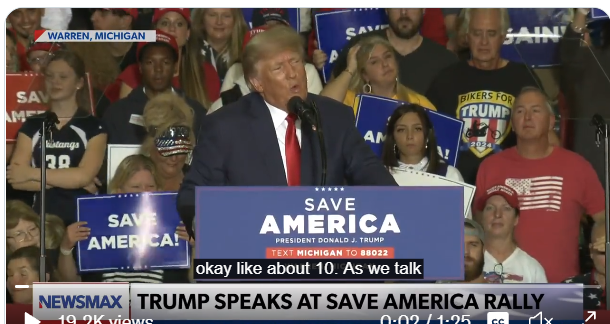 Donald Trump is in Michigan tonight, pushing the political fortunes of MAGA candidates, and lying his ass off about everything else.

He is in the usual yuuge auditorium, where Marge Greene acted as his warm up act, asking for her political enemies to be imprisoned.

Interesting she would say such a thing and then Trump would follow up with a prediction of his own.

Trump: I think they’d like to see me in prison.. you know why? Because they’re sick pic.twitter.com/nIFrCI8uZH

Trump goads his fans into booing the media at his rally, which these days overwhelmingly are folks from fringe right-wing outlets pic.twitter.com/W1DmQrbVg1

No, I don’t know what the nuns are doing there. Anti-abortion support, perhaps? Or, maybe they wanted to see Satan incarnate for themselves, so they could go back to the convent and pray? What I know is that the Catholic church is strong in Ireland and abortion is legal there. Why oh why are we so backward in the U.S.?

You’re going to love this. This is Trump playing a video on Letitia James’ “witch hunt.” This is a first. Trump is plenty scared, or else he wouldn’t be playing this, nor would he be talking about going to prison.

James has Trump dead to rights. If she did not, Trump wouldn’t be trying to rally the mob in his favor.

Trump’s mood on this is similar to his mood when he lost the election and didn’t want to leave office. Look to him to act in a similar manner. I would not be surprised if he ordered his MAGAs to violence. The question then becomes, would they do it? He’s not still president and in a position to pardon them, as they thought was the case before.

I hope we don’t end up finding out the answer, but like all things Trumpian, the worst you can think of happening is usually the thing that does in fact happen.