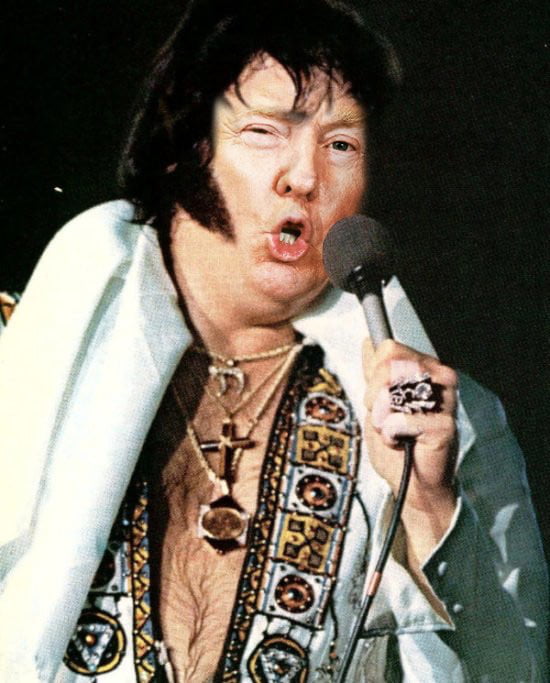 This is a first. King Trump is actually touching his subjects. Maybe they’re wealthy. They must be. You know that he wouldn’t want to touch somebody with under $10 million net worth, say. And those people would be marginal. Trumpty wants to bat in his own league, which if you count in his fantasy set of books, the one he keeps to please the bankers, as opposed to the one he cries poor mouth to the IRS with, makes him a yuuge billionaire.

He doesn’t fool the real billionaires, the Mike Bloombergs, for instance, and I’m sure Bezos and Musk and them all laugh when Trump’s name is brought up in that context. Unlike him, they actually understand business and money and how to be successful with both.

So you take a look and decide what you think this is all about.

This is starting to remind me of the heavy, bloated, addled Elvis years in the 70s. Today at Mar-a-Lago. pic.twitter.com/g2cI35H7Hq

Interesting clips are emerging from Mar-a-Lago these days. Just the day before yesterday, the clip of Trump’s “private conversation” with golfer John Daly went viral. Trumpty doesn’t know he is surrounded by spies at Home Mar Sweet Home-a-Lago, although he should have enough sense to suspect. If he had anybody monitoring left-wing media, just as we monitor right-wing, he would come to see that he’s got vipers in his midst. I am sure his sycophants know about all this, they just don’t want to tell him.

And let us define “spies” since Trump is so paranoid on that topic. It’s scarcely a “spy” if it’s an invited guest — and perhaps close friend, even — who is taking photos as everybody does at these bashes, right?

I would love to know if these clips are coming from more than one person and maybe we’ll find out in time. For now, Ron Filipkowski posts the lion’s share of these and he used to be a Republican before he left the party and the party left him. He used to be invited to the big Republican bashes in Florida and elsewhere and he’s got friends who are now, evidently. Although I have to say, this looks more like Happy Hour at Chile’s than some conclave of wealthy Republicans to me.

Now what was it Ronny Jackson said? Oh yeah, Trump weighs only 239 lbs. and could live to be 200. He must have had one leg on the scale and the other on a banana peel that day. Or, Jackson was half in the bag and transposed the first two numbers and 329 I would believe.