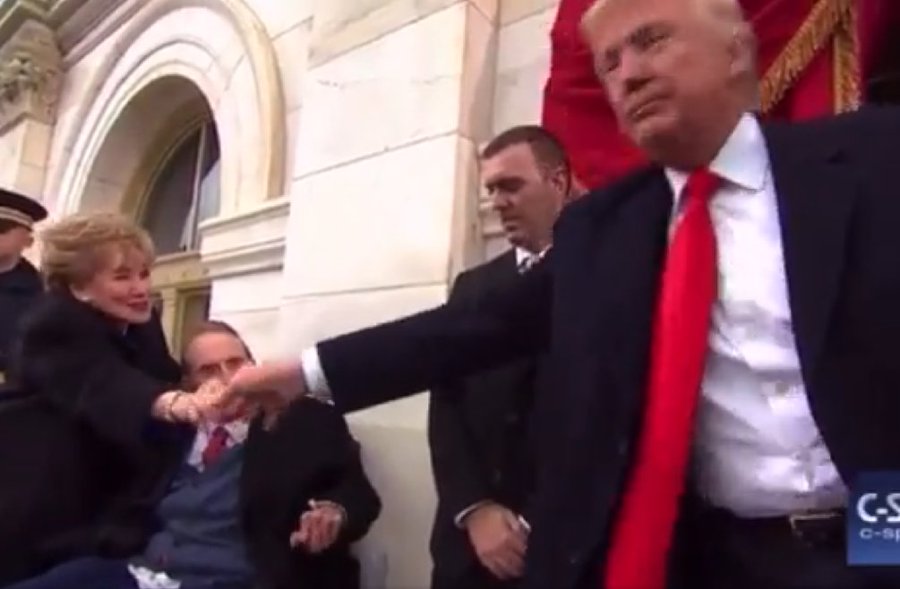 Donald Trump is trash with cash. I used to say “trailer trash with cash” until a woman who owned a trailer contacted the editor at Daily Sound and Fury and demanded that she “Fix her!” meaning me. Oh, this gal was livid and went on to describe the wonders of home ownership and declare how if I was a renter, she was lightyears beyond me. Everybody’s got a different idea. I can stand on my balcony and if I lean over the rail look to my right I can see the trailer park on the other side of the wall, between here and the freeway. I’ll take my apartment and my birds’ eye view from my 18-step staircase, personally. The trailer people can squat on the ground in their metal boxes, God love them.

Back to the point, trash with cash and former U.S. president Donald Trump was asked, I assume, to greet Bob Dole. It appears to me from Melania’s costume that this was inauguration day. Trump didn’t want to be bothered with an old man, a “loser” no less, in a wheelchair, and it shows.

Note the difference between the respect paid to Bob Dole by Donald Trump compared to Barack Obama. pic.twitter.com/YdfTPjCigz

Now what is really egregious about this is that Bob Dole was one of the few elders in the Republican establishment to endorse Trump and the only former presidential nominee to attend the convention where Trump was nominated. Trump truly owed a bit more deference to Senator Dole, but Trump has no interest in the Republican party as an institution, except insofar as he can destroy it. And we wish him all the luck in the world with that endeavor, absolutely. Please proceed, as one of our great statesmen said.

As you have heard, Bob Dole expired today at the age of 98. He went to Washington 60 years ago and ran for president three times. Dole didn’t go along with the stolen election nonsense. He said, “He lost the election and I regret that he did, but they did.” He also said he was “sort of Trumped out.”

And Joe Biden, who is another man with class, rose to the occasion, graciously as you would expect. New York Times:

President Biden called Mr. Dole “an American statesman like few in our history. A war hero and among the greatest of the Greatest Generation.” He added, “To me, he was also a friend whom I could look to for trusted guidance, or a humorous line at just the right moment to settle frayed nerves.”

This is beyond Donald Trump. Joe Biden, as you well recall, gave a beautiful and stirring eulogy at John McCain’s funeral. This is how it’s done. Statesmen and women respect one another as members of an exclusive and honorable club. The trash with cash guy has never understood the human dimension of any of this. His assessment of life begins and ends with ratings and photo ops.

As the old soldiers of World War II faded away, Mr. Dole, who had been a lieutenant in the Army’s storied 10th Mountain Division and was wounded so severely on a battlefield that he was left for dead, came to personify the resilience of his generation. In his post-political career, he devoted himself to raising money for the World War II Memorial in Washington and spent weekends there welcoming visiting veterans.

In one of his last public appearances, in December 2018, he joined the line at the Capitol Rotunda where the body of former President George H.W. Bush, an erstwhile political rival and fellow veteran, lay in state. As an aide helped him up from his wheelchair, Mr. Dole, using his left hand because his right had been rendered useless by the war, saluted the flag-draped coffin of the last president to have served in World War II.

Politically, Mr. Dole was a man for all seasons, surviving for more than three decades in his party’s upper echelons, even though he was sometimes at odds ideologically with other Republican leaders.

He was national Republican chairman under President Richard M. Nixon in the early 1970s; the running mate to President Gerald R. Ford in 1976; chairman of the Senate Finance Committee during Ronald Reagan’s presidency in the 1980s; and presidential standard-bearer during Newt Gingrich’s “revolution” of the mid-1990s, when the Republicans captured the House for the first time in 40 years and upended the power dynamic on Capitol Hill.

More recently, Mr. Dole, almost alone among his party’s old guard, endorsed Donald J. Trump for president in 2016, after his preferred candidates had fallen by the wayside. On the eve of his 93rd birthday, he was the only previous Republican presidential nominee to appear at the party’s convention in Cleveland, where Mr. Trump was nominated.

Mr. Dole himself ran three times for the White House and finally won the nomination in 1996, only to lose to President Bill Clinton after a historically disastrous campaign. He had given up his secure post in the Senate to pursue the presidency, although, as he acknowledged, he was more suited to the Senate.

As the Republican leader, he helped broker compromises that shaped much of the nation’s domestic and foreign policies.

He was most proud of helping to rescue Social Security in 1983, of pushing the landmark Americans With Disabilities Act of 1990 and of mustering a majority of reluctant Republicans to support Mr. Clinton’s unpopular plan to send American troops to Bosnia in 1995. (Mr. Dole was not wild about the deployment either, but he long believed that a president, of either party, should be supported once he decided something as important as committing troops abroad.)

You can read the rest of Dole’s obituary in the Times. I wonder what kind of an obituary they will write about Donald Trump? Because if it’s the least bit truthful, it will be hilarious. Trump isn’t good enough to wipe the boots of either Bob Dole or John McCain.