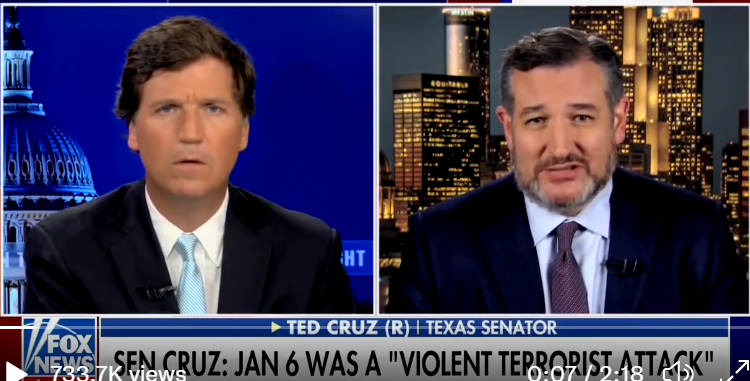 Ted Cruz is finished. He might as well pack a few things and head for Cancun for good, because he was tossed from the ranks of MAGA politicians, live on air by Tucker Carlson last night and today the vultures are picking his bones.

It goes without saying that I never respected the oleaginous and odious Cruz before, but after he groveled before Tucker Carlson I respect him even less — if that’s possible. The man has no self-respect, as you know. You all remember Donald Trump calling Heidi Cruz ugly and accusing Cruz’ father of being involved in the assassination of JFK. Nevertheless, Cruz showed up to kiss Trump’s ring.

Watch the power structure here, between Mother Tucker and Cruz, which is being compared to the dynamic between the tortured and broken Reek in Game of Thrones and his tormenter/master.

And I wasn’t kidding about the vultures picking Cruz’ bones.

When you’ve lost the Beast from Budapest … Gorka on Ted Cruz tonight: “This man is an insult to the word ‘conservative.’ And I hope Texas tells him – and that man will never, ever be re-elected.” pic.twitter.com/WSrYbL8B0l

These next two clips are incredible as well. Cruz knows he’s going down in the swamp and the alligators are going to eat him. And Carlson, rather than throw him a line, just stares at him.

More groveling by Ted Cruz to end his interview with Tucker. pic.twitter.com/SP92qHwOOc

If you missed it, this is what Cruz said that sealed his doom.

Gee, I don’t know. Sounds like a pretty clear statement to me. pic.twitter.com/hxf9Hq1V6E

A couple of obvious takeaways here. If you just landed from outer space and didn’t know how things were supposed to work, it would be clear to you that the Fox News hack is the one with the power and the United States senator answers to him and is impotent without the hack’s approval.

And secondly, the fact that far right-wing talking head Sebastian Gorka is piling on Cruz as well does not bode well. Cruz at this point has zero chance of competing effectively in any primary for the presidential election in 2024, not that he had much before, but he has absolutely none now. Now the question becomes whether he can hang onto his senate seat and considering how Texas is devoted to voter suppression and gerrymandering, unfortunately that might happen. You recall the bills reacting to Trump’s fantasy of mail-in voting being fraudulent, coupled with changes in hours that the polls are open, disproportionately affecting low income voters and people of color. Texas is not devoted to voters’ rights, it’s devoted to the good ole boys hanging on.

Here is Cruz being re-christianed “Reek.” The clip is worth watching for other things. Kamala Harris got raked over the coals by Fox News for comparing January 6 to December 7, Pearl Harbor. Yet a Fox News guest compared the burning of the Fox News Christmas tree to Pearl Harbor and that’s quite okay.

Ted Cruz has been publicly excoriated by the people who really run the Republican party. I don’t expect him to survive this one. As stated, he might win reelection due to the gerrymandering, but on the other hand, he might get primaried. The GOP is always looking to elect more and worse Republicans.