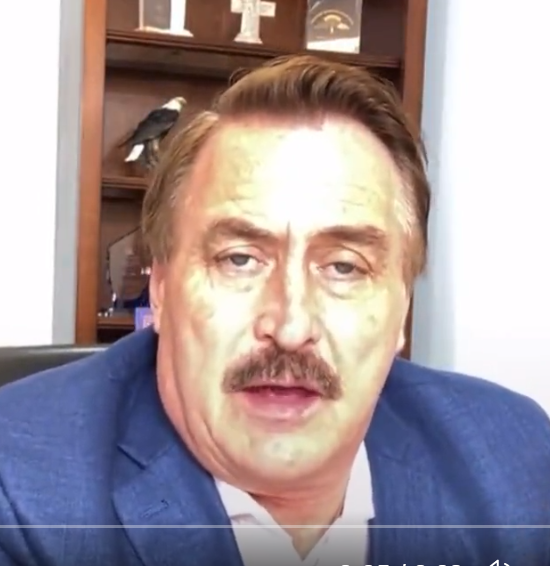 “On top of spaghetti, all covered with cheese, I lost my poor meatball, when somebody sneezed.” — Parody of Old Smoky

A parmesan cheese joke or two might not be out of order tonight.* At least that’s the image that came to mine when Mike Lindell came on screen, looking pretty wasted and not even having the savoir faire to grab the remote and turn down the sound.

Maybe we can flambee Mike, like they do with baked Alaska. Might wake him up. Take a look.

Lindell surfaces for a quick update to say that his lawyers are working on getting his phone back. pic.twitter.com/hhrAw30qGk

I love the end of this short clip where Lindell just zones right out. Whomever was filming this had the common sense to cut.

Run it through a second time and you’ll see that Lindell zones right when the announcer says, “obstruction of justice.” Isn’t that interesting? Kind of like Pavlov’s dog, his ears went up at what was important.

And this you’ll enjoy. Madison Cawthorn, the renowned Roman history scholar (oh yeah. And he says he’s a gourmet French chef, too, is this news to you?) took to the airwaves to put the Lindell phone seizure into the proper historical context. Yes, it’s just as theologian Lauren Boebert says, we are in the end times.

Madison Cawthorn says the Lindell phone seizure signifies the end of the Republic, just like the fall of the Roman Republic, because all Lindell does is sell patriotic pillows. He adds that he grew up listening to Rush Limbaugh, who warned that this day would come. pic.twitter.com/rWSAMbtmRV

Look at it this way, friends. Maddy is going to be unemployed come January, 2023. He needs to get busy auditioning for that media career as a political historian. Heather Cox Richardson he is not. But he probably sounds smart to his constituents.

This is good, too. Barron Trump and Mike Lindell were raided, instead of real criminals, we are told. The victimization of young Barron and the violation of Melania’s lingerie cabinet are major right-wing talking points. They had died down for a few days but the Lindell incident inflamed them once again.

Here’s a half measure that will avail Lindell nothing. Think about this. A guy worth $300 million needs somebody to GIVE him a new phone. Great. I’m sure an undercover FBI agent will be happy to oblige.

I wonder what the gag here is, to get the rubes to give Lindell a bunch of I-Phones and then they’ll be resold?

Owner of ‘Reawaken America’ tour announces that if someone shows up at their event this Friday with a new burner iPhone for Mike Lindell he will upgrade them to ‘VIP status’ and let them meet him backstage. pic.twitter.com/p2Y4gMFzlK

Here’s the cherry on the sundae.

Fight back by shopping RUDY. pic.twitter.com/iayepjgcWz

Give Rudy your money. He has all the answers.

*Crack addicts smoke parmesan cheese when they run out of crack. Don’t ask me.