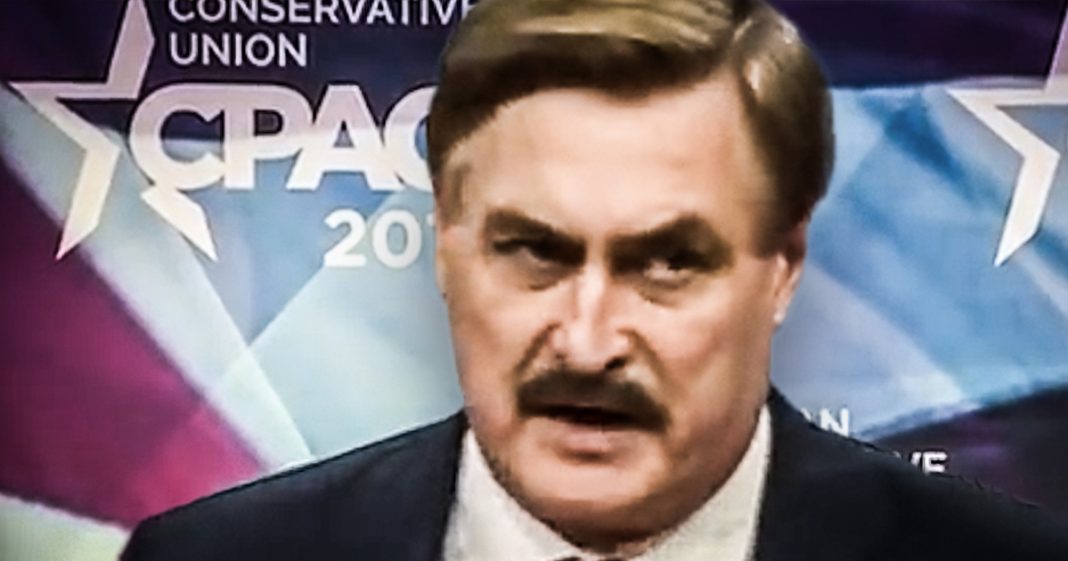 Boundaries are not Mike Lindell’s strong suit. He doesn’t know where the lines are drawn and forget about the goal posts. He picks those up and runs downfield with them every few weeks. But then again, Lindell isn’t playing the same game that you and I are, or at least he’s playing it with a few cards less than a full deck. Since he used to be a professional card dealer, he can probably function for a few more hands this way, but he ought to realize that the odds are stacked against him from the numbers that are coming up.

But that doesn’t matter when you can invoke Gawd and blame Him for your insanity. Lindell’s been saying for a while now that his obsession with the Big Lie is in fact a cosmic battle between good and evil, so logically he would begin talking about the end times, the will of God and how he’s being persecuted.

In any event, here is Lindell’s latest rant on Steve Bannon’s show and you see the apocalyptic dimension of it all. What I find most comical is that he rags on Fox News, per usual, but his ads still play there. He and Fox may have publicly broken up as a couple but they still sleep together. Money trumps moral principle, but if you knew anything about these people, you knew that.

He’s right about one thing, up is down and down is up. We do agree on that much.

He’s alleging that a subpoena for his cellphone metadata is a gross violation of his freedom of religion, because “his 2020 election integrity activities are motivated, in part, by his strongly held religious beliefs.” Also the people who listen to him shout about Chinese hackers and Dominion Voting Systems and his amazing lawsuit, which is forever two weeks from landing at the Supreme Court, are also motived by their Christian faith. And so it is illegal to look at his phone records.

On top of which, Mike Lindell is also a journalist because he makes movies about the election — but not in a Jesus way, in a “just the facts, ma’am” way, because journalism is VRY SRS BZNS. And so he is entitled to First Amendment protections as a bona fide member of the press.

Quit rolling your eyes! This is very important Constitution stuff, and not at all the ravings of a pillow pumping maniac throwing nonsense at the federal docket in hopes that something might stick long enough for Republicans to take back the House and end the inquiry into the events of January 6, 2021.

Not convinced? Well, look at this. Would Harvard Professor Alan Dershowitz be entering his appearance in Lindell’s case if these weren’t totally legit arguments?

“I will be a constitutional consultant on the first and fourth amendment issues— issues I’ve litigated and written about for many years,” Dershowitz told Above the Law.

“Remember too that the First Amendment doesn’t only give Lindell the right to express his views,” Dershowitz told Newsweek at the time. “It gives 50 million people the right to hear his views.”

And Dersh beamed into Lindell’s Election Pillowpallooza to express his concern that Dominion was cancel culturing free speech by filing defamation suits against people just for telling lies about the company and ruining its business.

The professor did not specify how any of these entities, with the possible exception of universities, could violate the First Amendment. But perhaps he’ll explain it to us now that he’s actually appearing in the instant lawsuit.

Water finds its own level. Dershowitz washed down to the fever swamps of the law long ago. He’s got no credibility left and that’s been the case for some time. Now he’s found a deranged alligator named Lindell, climbed on his back, adjusted the pillows and the two of them are headed to the Black Lagoon. Dershowitz doesn’t care as long as he gets paid.

This is going to be a good episode. Stay tuned.

Is The DOJ About To Ride “The Big Mo”?