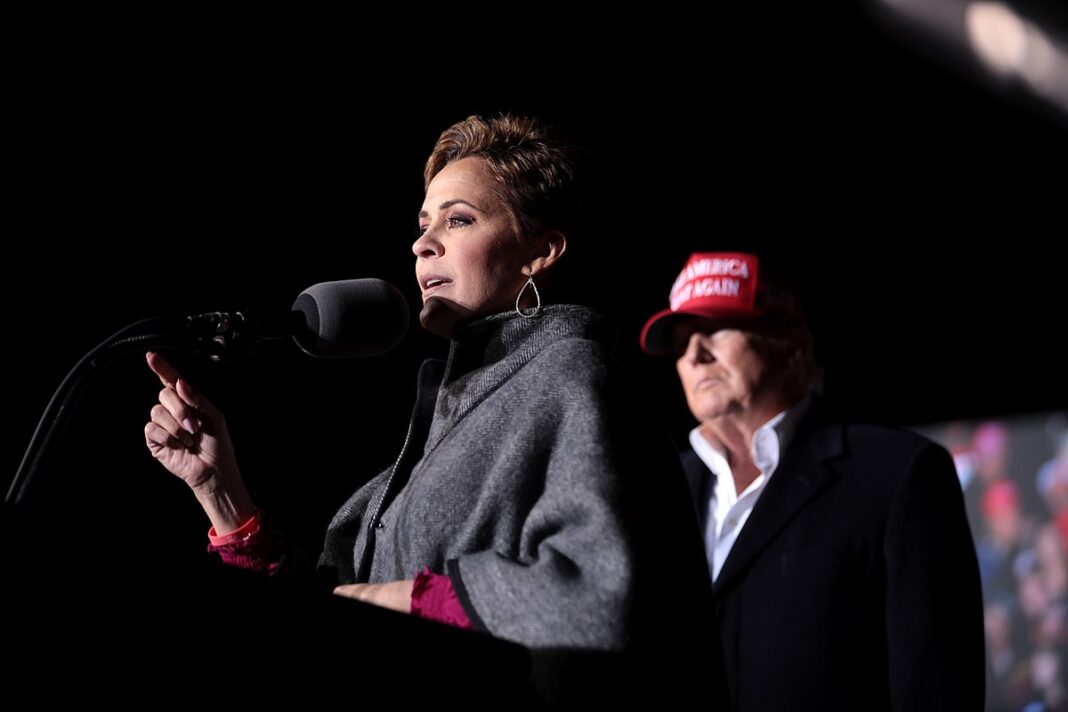 Maybe, in some future time, people will sit around the campfire in the Arizona desert and tell tall tales of the Legend of Kari Lake. Maybe she’ll have achieved Paul Bunyan-esque stature by that time, as the Female Trump, the woman who could outlie the Father Of All Lies — which is either Donald Trump or Satan, depending upon your point of view. Maybe Lake will soon be doing MyPillow ads, along with Rudy Giuliani.

In the meantime, she is hell bent on claiming that her election was stolen, despite any factual basis upon which to make such a claim. Both the supervisor and the county recorder for Maricopa County, Bill Gates and Stephen Richer, respectively, are being demonized as part of a deep state plot to steal this election, the fact that they are both Republicans notwithstanding.

And Republicans they may well be, but they’re not MAGA Republicans and that’s an entirely different kettle of fish. So Lake is determined to take this as far as she can. Here is the opening salvo for what looks to be an utterly ridiculous and prolonged fight over nothing. (Click on the tweet if the video doesn’t show up. This is a Must See.)

Sherry worked as an election observer in Phoenix.

She saw a man whose ballot was rejected 24 times.

Finally, he asked for a provisional ballot.

That ballot was rejected as well.

The voter was wearing a "Let's Go Brandon!" shirt.

It's uncertain if he got to vote at all. pic.twitter.com/GAlp08mc6D

Yes, we know. If you believe this story, we have a bridge to sell you, too. 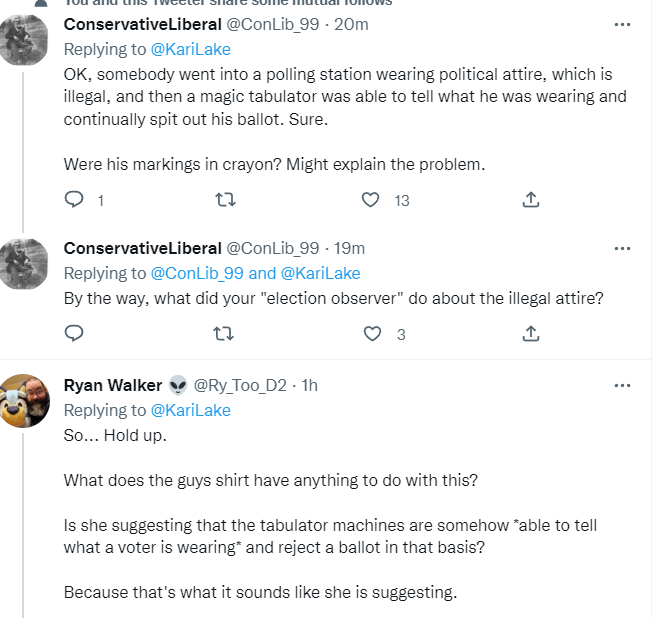 I like the idea of the fashion conscious tabulating machine. Sounds like a good idea to me. If we had more tabulating machines that appreciated the value of Gucci over Ferragamo, for example, we would have a much more chic voting system. That said, the voter could have used a mail-in ballot or a drop box — unless they, too, have eyes and make sartorial judgements.

I think we should use Occam’s Razor here and conclude that grifting must be Lake’s raison d’etre, as it is Steve Bannon’s, Mike Lindell’s, the rest of the election deniers. Although I will say, with respect to Lindell, he is a True Believer. Yes, he is a grifter, but he really does have it in his mind, what’s left of it, that Trump won the 2020 election and that is his monomaniacal delusion, that propels him forward every day. Bannon, on the other hand, is fundamentally a grifter and a sociopath and as to Lake, I guess she didn’t save as much money as she might have when she was a newscaster. Who knows?

She made decent money reading the news over on Fox10 in Phoenix, but not millions of dollars. Maybe she sees politics as her chance to parlay her assets, i.e., being telegenic and a facile liar, into the big time money wise. That is the simplest explanation, so it’s the one we should go with.

But think of the trade off. Life is full of trade offs and in this instance, Lake is choosing to align herself with the most hated man — so far — of the 21st century, Donald Trump. Is any amount of money worth becoming a social pariah for? I guess if you live in a small enough bubble, then yes, it is.

Lake is putting Arizona into the same position that officials in Georgia were put into by Trump in 2020. And you see the result of that. Brian Kemp and Brad Raffensperger are still standing politically, while Trump and his candidates are being given the vaudeville hook, and being yanked off the political stage. Meanwhile, Ron DeSantis is in the wings, ready to take over the lead role in GOP politics.

And Lake wants to insert herself into this kind of a mess in the last half of the last act of As Trump World Turns?

Maybe notoriety is better than obscurity, and disgrace is not too high a price to pay. Apparently it’s not too high for Kari Lake.